Of the 38.4 million vehicles registered as of Jan 31, 2018, 20.5 million are motorbikes. Some back building a separate lane for motorcycles.

Not all road users are made equal. However, motorcycles -- which represent the largest number of vehicles on the road -- are the least equal of them all, according to Pichai Taneerananon, a lecturer at the Prince of Songkla University's Graduate School, and a staunch advocate for motorcycle lanes.

"Although more than half of the vehicles registered with the Department of Land and Transport are motorcycles and about eight in every 10 road accidents involve a motorcycle, the government has failed to create a separate lane for motorcycles," he told the Bangkok Post.

"The need for motorcycle lanes has been discussed for decades, yet the project has always failed to get off the ground," said Prof Pichai, who is also chairman of the Engineering Institute of Thailand's Subcommittee on Road Accidents and Road Deaths Prevention.

Five years ago, Prof Pichai proposed that the government should build motorcycle lanes in Bangkok.

He maintains that traffic accidents would be reduced if motorcycles have space to operate in separate lanes. However, his proposal fell on deaf ears. Among the obstacles is the fact that roads are already congested without separate lanes being created, and a motorcycle lane may be overtaken by other vehicles anyway.

He added that motorcycle riders deserve better infrastructure. Of the 38.4 million vehicles registered as of Jan 31, 2018, 20.5 million were motorcycles. Meanwhile, 78.9% of all road accidents recorded during the Songkran festival period in the same year involved a motorcycle, according to the Department of Land and Transport and the Interior Ministry's Road Safety Centre. 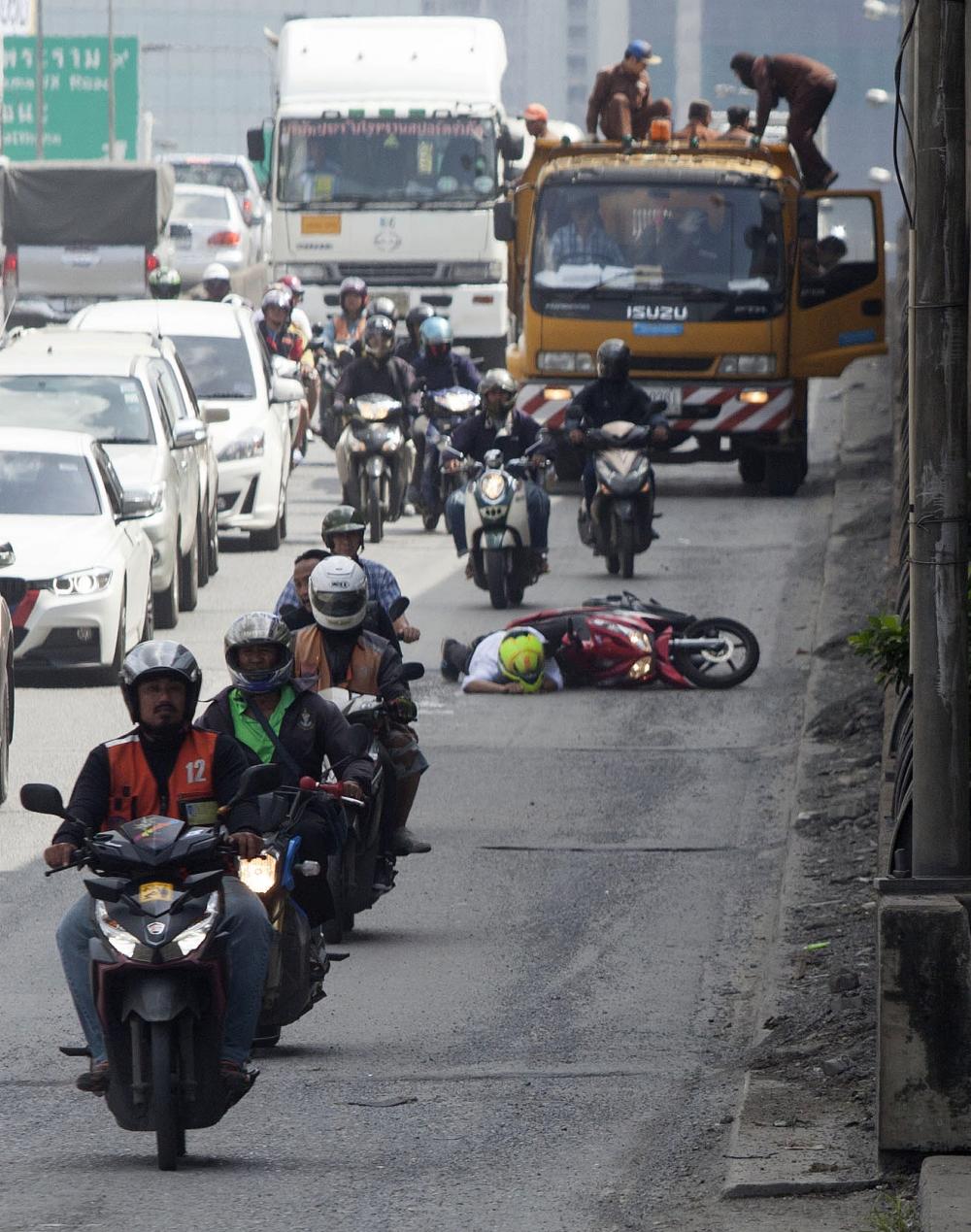 death on wheels: About eight in every ten road accidents involve a motorcycle, according to Department of Land Transport and the Interior Ministry's Road Safety Centre.

Malaysia launched a motorcycle lane project in Kuala Lumpur about 20 years ago and it continues to expand this project, Prof Pichai said. "As a result, Malaysia has successfully brought down the number of deaths from road accidents by as many as 83%," he added.

The Malaysian government agreed to implement the motorcycle lane project because most vehicles in the country also happened to be motorcycles and accidents involving motorcycles had been claiming numerous lives each year.

Countries in this region have a higher number of motorcycles than cars on the road because they are cheaper and far more convenient for people to use to navigate through traffic in the city.

"Bangkok is an ideal location for piloting a motorcycle lane project given the high number of road accidents involving motorcycles," Prof Pichai said.

The city can begin the project on roads which have several lanes such as Ratchaphruek Road which has six lanes, plus two service lane roads in both directions.

Out of these 10 lanes, one could be easily designated as a motorcycle lane, he said. 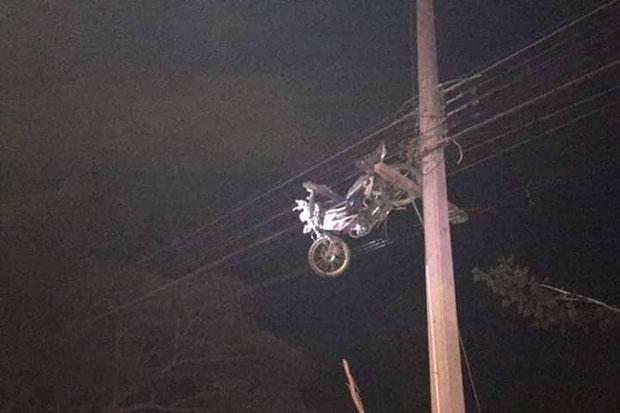 aerial manoeuvres: A motorcycle suspended from power lines after an accident in Kap Choeng district of Surin province in March. Photo from CB650F Thailand Facebook page

Stone or concrete barriers may be required to prevent cars from entering the motorcycle lane while the areas where motorcycle lanes will meet car lanes, such as intersections, right and left turns, will have to be redesigned.

"Of course, in the beginning, the idea of motorcycle lanes will face opposition by those who may think such a lane will steal precious space from cars which already face constant gridlock," Prof Pichai said.

So, at the start, the motorcycle lane project should be implemented on a 1km or 2km section of road in an area already crowded with pedestrians such as in front of a school or a temple, he added.

From past experience, such as Bangkok's plan to designate a lane on certain roads for bus rapid transit, opposition voiced by car drivers against the plan appeared to be far louder than from other types of commuters who use Bangkok's roads.

"Since the population of motorcyclists is far larger than any other category of motorists, the government should at least respect their rights and do something for them too. Motorists pay tax but so do motorcyclists," Prof Pichai said.

The government, he said, has operated a lopsided policy in investing a lot of money to build roads for car drivers. Moreover, as environmental and health concerns are taken more seriously, local administrations have invested in building separate bicycle routes.

"Unlike the bike lanes, motorcycle lanes will serve a larger number of people who need it for daily commuting," he added. 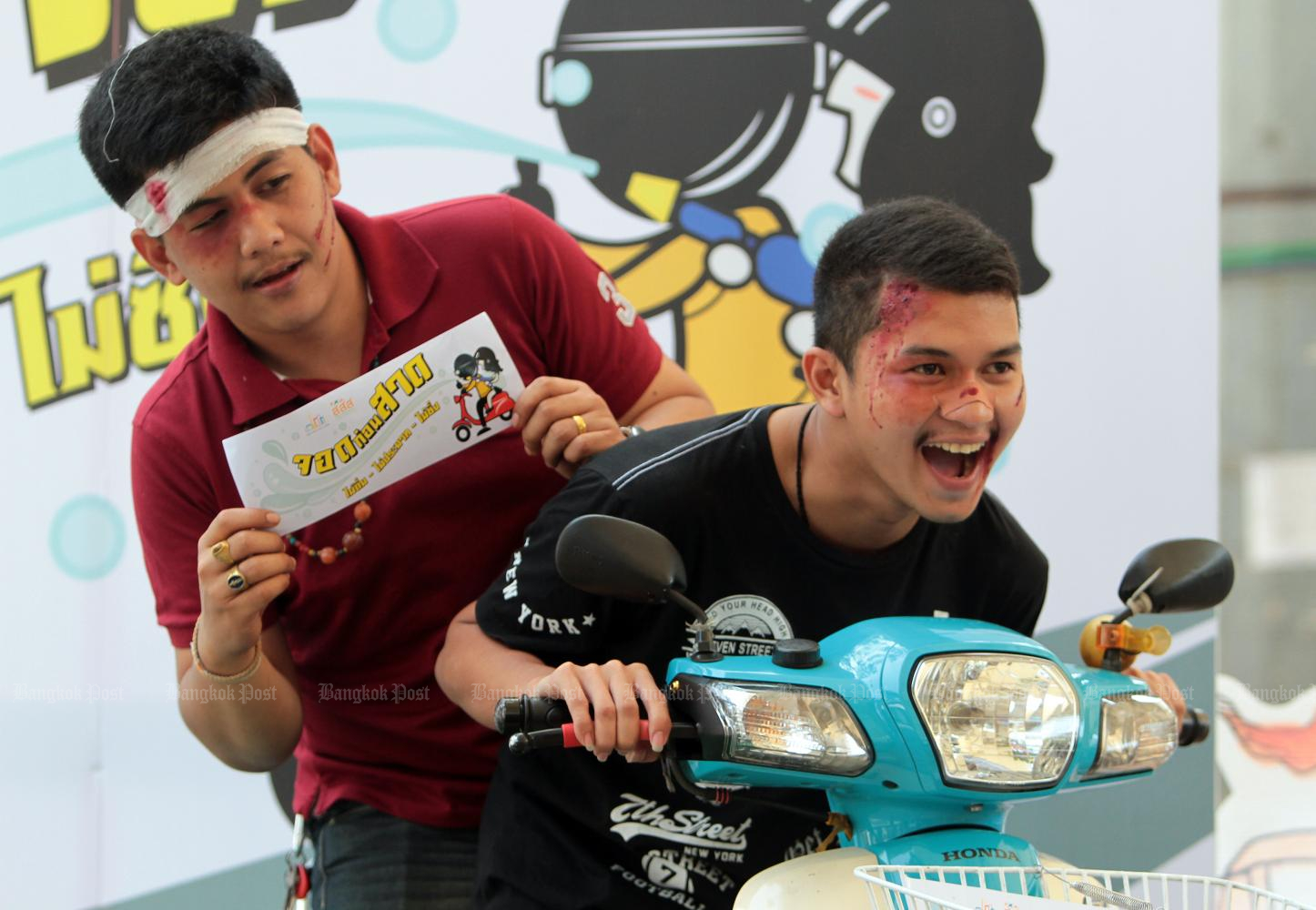 Among them is Thunchanok Kulma, a 29-year-old office worker who has been riding a motorcycle from home in the Ratchadaphisek area to work at a company on Ratchadamnoen Avenue.

"I totally agree with this idea of motorcycle lane because that will improve the safety of motorcyclists as they will no longer have to drive alongside cars," she said.

"Please treat us, motorcyclists, as people with the right to share the roads with you, car drivers," she said.

Athiwat Sachadamrongrit, a 55-year-old businessman in the Sukhumvit area, also agreed that a motorcycle lane will help curb road accidents, given the number of motorcycles on the road, which appear to be more than half of all vehicles out there.

"It will also be important to enforce the law to ensure that the motorcycle lane is reserved for motorcycles only otherwise it will become like the bus lane that is now -- full of cars," he said.

Former champions SCG Muang Thong United, winless in their first two Thai League 1 matches, are hoping for a change in fortune when they host Ratchaburi on Friday.

The government has denied delaying the process of receiving another 1 million doses of Pfizer vaccines against Covid-19 to be donated by the US.

At UN, West frustrated by slow pace with Iran

UNITED NATIONS (UNITED STATES) - The United States and European Union voiced frustration at the UN this week over the slow pace with Iran, saying its new government showed no indication it was ready to revive a nuclear accord.

Rules on travellers to ease