Devotees console each other after seeing their abbot shot dead at Wat Suwanpakdi in Muang district, Trat, around dawn on Monday. (Photo by Jakkrit Waewkraihong)

TRAT: A man was arrested after the abbot was shot dead at a temple in Muang district before dawn on Monday in full view of other monks and devotees attending morning prayer.

Phra Khru Kittisarakosol was lying dead on the monks' dais in the pavilion where prayers are offered when police arrived.

The abbot, 60, had three gunshot wounds, one in the stomach and two in the head.

About 60 horrified devotees were milling around in tears over the loss of the abbot.

Thammarit Jullasin, 56, spokesman for the temple who witnessed the attack, said a lone man carrying a pack of milk entered the pavilion and walked toward the abbot as if about to make an offering. Instead, he pulled out a gun and fired at the abbot in full view of people attending morning prayer. The gunman then left.

Police arrested Pinit Siriroop, 61, at his home in Muang district around 6am. He was taken Muang police station for interrogation. 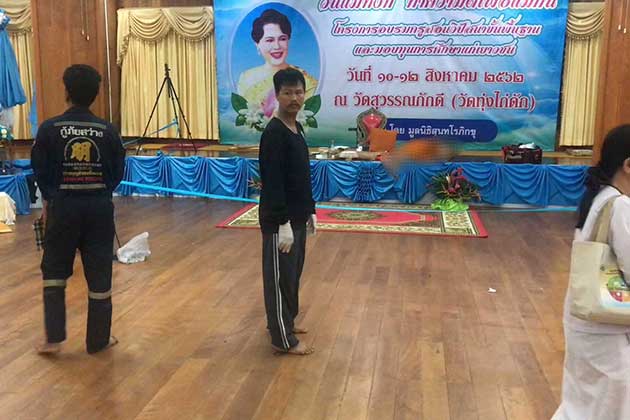 Rescue workers prepare to remove the body of the slain abbot from the dais at Wat Suwanpakdi in Muang district, Trat, on Monday morning. (Photo by Jakkkrit Waewkraihong)

CHON BURI: Although Pattaya is gearing up for reopening to tourists, tentatively set for next month, the famed Alcazar Cabaret Show theatre is not yet ready for it.