Elephant hit by truck, dies on way to hospital

Stunned rescuers mourn the death of a critically injured elephant they were taking to a university animal hospital in Nakhon Pathom. She was hit by a trailer truck on a road in a forested area of Nong Yai district in Chon Buri early on Thursday morning. (Photo: Department of National Parks, Wildlife and Plant Conservation)

A young wild elephant died on the way to an animal hospital after being hit by a truck on a road in Chon Buri province early on Thursday morning.

The elephant was hit by an 18-wheel trailer truck as it was crossing Road 344 near kilometre marker 56 in Nong Yai district of Chon Buri, according to the Department of National Parks, Wildlife and Plant Conservation said.

The accident was reported about 4.40am by a rescue unit from Wang Chain district in nearby Rayong province.

The animal, a female about 7-years-old and weighing about 3 tonnes, was following her mother in search of food at the time, according to a Twitter message on Mcot Plc.

The truck driver lost control after hitting the elephant, and his vehicle overturned. The elephant was knocked into a roadside ditch.

Wildlife official Padet Laithong, based in Sri Racha district of Chon Buri, said veterinarians called to the scene gave the elephant a painkiller and were taking her by truck to the Animal Hospital at Kasetsart University Kamphaeng Saen campus in Nakhon Pathom.

She stopped breathing as the lorry was passing through Bang Bung district of Chon Buri.

Veterinarian Thananon Panpetch said the elephant was seriously injured by the impact of the crash, with fractured legs and a broken back.

A crane was called in to lift the elephant onto the truck. The whole operation took about eight hours. 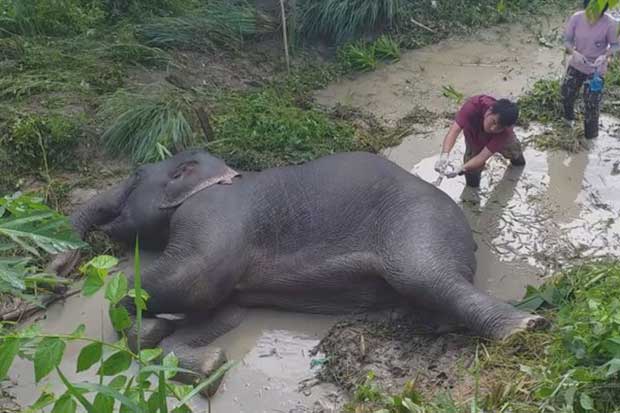