Officials from Airports of Thailand (AoT) put up signs in front of Central Village, a new luxury shopping complex due to open on Saturday. One sign warns it is AoT land and trespassers will be prosecuted. (Photo by Patipang Janthong)

Central Pattana Plc (CPN) has again insisted that its new Central Village mall near Suvarnabhumi airport received all legal clearances, but said it is ready to go to arbitration.

Preecha Ekkunagul, president and chief executive of CPN, said on Wednesday that the Central Village mall developer had taken all required legal and regulatory steps, particularly on three main issues.

First, the land used for the entrance and exit of the mall had legal access. There was no encroachment on state land or public areas. The site was not landlocked property.

The mall was located near Highway 370, a road accessing the southern boundary of Suvarnabhumi airport, in tambon Bang Chalong of Bang Phli district, Samut Prakan.

Although this land used to be state property, it was later given to the Department of Highways to build the highway and oversee it. This block was not a part of the land expropriated for Suvarnabhumi airport. Besides, Highway 370 was considered a public area, not land to which any agency could claim ownership, he said.

He cited a letter dated May 14 this year, saying that the department granted permission to AoT to put electrical wires underground.

On the second issue, CPN has strictly abided by the town plan. It had received permission from relevant agencies to build the mall in the green zone, in which a development could cover no more than 10% of the green area, he said.  No request had been made for an adjustment of the town plan, he added.

Thirdly,  the developer had legitimate permission from the Civil Aviation Authority of Thailand (CAAT) to build the mall in the area. The construction, including the height of the mall, did not contravene aviation safety standards, and no activities could pose an aviation risk, Mr Preecha said.

“It’s not necessary to hold talks with the AoT as the construction site of the mall project is outside the area of the agency. We have followed all required regulations and sought permission from the CAAT,'' he said. (continues below) 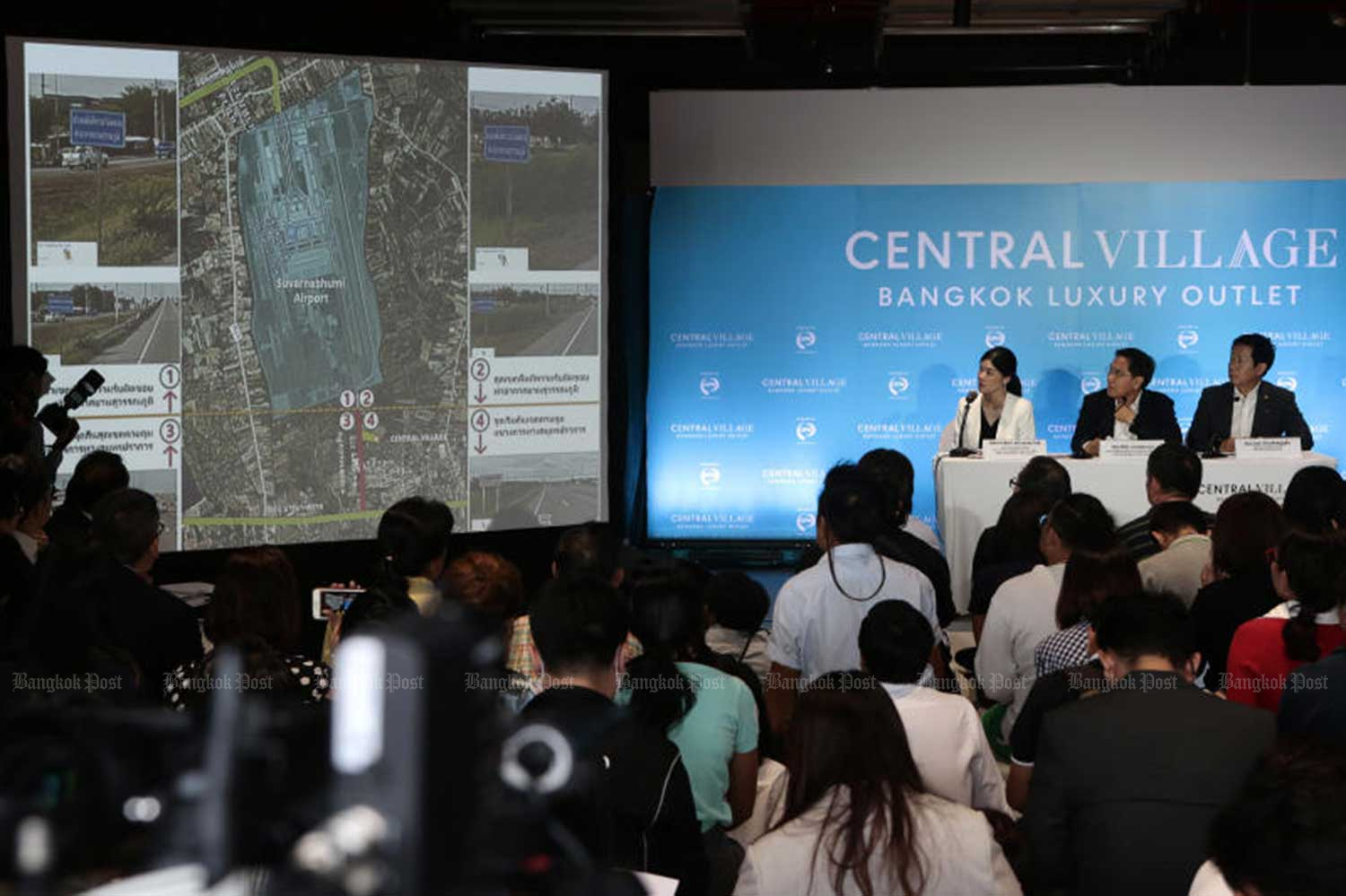 Preecha Ekkunagul, president and chief executive of Central Pattana Plc, (centre), holds a press conference on a dispute over land use for Central Village. (Photo by Patipat Janthong)

AoT and CPN have been at loggerheads over land use for the developer’s new luxury outlet, which was due to open this Saturday. A CPN statement earlier said AoT had blocked the entrance last Thursday.

The airport operator has challenged the 184-rai luxury mall project, saying it could cause traffic congestion on roads to Suvarnabhumi, and the lighting in the area could confuse pilots making landings at the airport

On reports that AoT president Nitinai Sirismatthakan had opened way for negotiations to settle the dispute, Mr Preecha said CPN was ready to sit down at the negotiating table, but everything must be according to legal procedure, not the interpretation of one party.

The CPN executive declined to comment on speculation that the land use dispute might stem from a business conflict. He said CPN did not see that it must compete with other operators. It had set a target to open the new mall on Aug 1.

If the Administrative Court issued an injunction ordering AoT to remove obstacles that blocked the entrance, the new mall would still open as scheduled.  If the court ruled another way, CPN had another plan, he said, but declined to disclose it.

The CPN president said the company would go to court if the dispute affected the firm's business.

Meanwhile, the AoT president insisted it was neither persecuting any business operator nor protecting anyone's interests.

Mr Nitinai said on Wednesday that AoT, as the airport operator, was duty-bound to ensure Suvarnabhumi's safety. Everything must be done righteously and according to the law, he said.

Those who raised doubts over AoT’s move should follow the legal procedures. He insisted AoT had never prosecuted any operator.

Construction of Central Village was contentious because the land belonged to the state. The Department of Highways had first asked for the use of the land to build Highway 370, the AoT president said.

Later, the private sector had sought use of the land as an accessway, and the Department of Highways had approved it.

“AoT is coordinating with Bang Chalong tambon administration organisation in investigating the matter. If there is land encroachment, legal action must be taken. As the developer of Suvarnabhumi airport, AoT would file a complaint,’’ said Mr Nitinai.