Mum thanks bikers for saving life of her son
Thailand
General

Mum thanks bikers for saving life of her son

A Grab food delivery driver takes a mother and her seriously ill son to a hospital on Monday. (Photo from Ployly M Kaewya Facebook page)

The mother of a boy on Wednesday thanked two motorcyclists for heroically helping save the life of her two-year-old son.

"Thank you, my two heroes, for helping the boy," the mother wrote in a message on her Ployly M Kaewya Facebook account. She also posted a video clip of her smiling son, Pla Wan.

"Thank you everybody for showing support for Pla Wan," she added.

The boy and his parents were stuck in traffic congestion on a flyover when Pla Wan suddenly suffered a spasm. The parents desperately needed to take him to a hospital but the traffic made that impossible.

That was when a Grab food delivery motorcyclist drove past.

"Please help us. The boy is seriouslly ill," the mother said as the Grab rider stopped. She and her sick boy clambered onto the back of the motorcycle -- damaging the pizza in the box -- and sped to the hospital.

The nearest hospital was on the other side of the road with no U-turn nearby, so the Grab rider asked for help from a taxi motorcyclist. He carried the boy across a pedestrian bridge to the hospital with his mother, saving valuable time in the medical emergency.

The Grab biker then continued on his way to deliver the pizza -- and explained to the ride-hailing app why it was damaged.

"It took me some time to decide whether I should post this clip...because everytime I see it, as a mother, I feel like my heart is breaking," she wrote on Facebook.

The mother said she decided to post the video as a lesson for others that thinking clearly and staying calm were vital in an emergency.

The Grab biker was later identified on the Traffic Police Division Radio Facebook page as Watchara "Pop" Kasien, 33, while the taxi motorcyclist was Tawan "Win" Kraipetch.

"That Grab was my only hope (to take my son to the hospital) as quick as possible," she added. 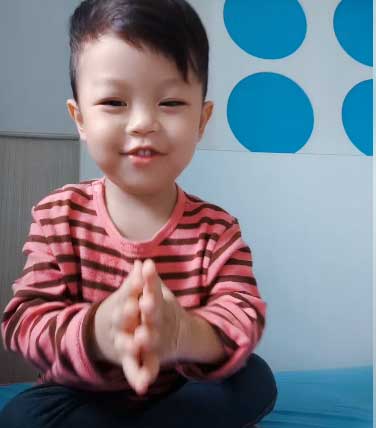 And Pla Wan had a message for his well-wishers on Wednesday. "Pla Wan is safe now. I will return home from the hospital today," the boy said on his mother's Facebook page.

"Thank you, my heroes," he said before giving them a wai to show his appreciation.