A woman uses a small boat to get around her flooded village in Chum Saeng district of Nakhon Sawan province on Monday. (Photo by Chalit Phumpuang)

Provinces in northern and northeastern regions already battling flooding can expect no respite, with more rain on the way to exacerbate their problems.

The Meteorological Department on Tuesday issued warnings for both regions, that heavy rain could trigger flash floods and runoff in some areas from Wednesday to Sunday. The rain will ease off in other parts of the country during that period, it added.

Rain continues to fall in many areas, although the latest storm, Kajiki, has left the country with no new storm on the way.

Flooding has claimed 28 lives and damaged 370,749 households. In the Northeast alone, 52 rural roads have been rendered impassable.

In Ubon Ratchathani, Muang and Warin Chamrap districts were under water on Monday as  the Moon River overflowed its banks. Many people were forced to leave their homes and stay at temporary shelters. Provincial authorities said it was the worst flooding in Ubon Ratchathani in 17 years. 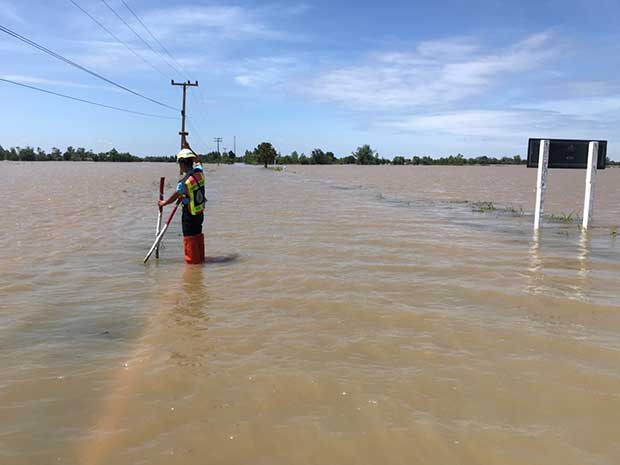 Fifty-two roads in the northeastern region are impassable due to flooding.