Riverside communities in Kanchanaburi are warned of possible flooding as the rate of discharge is increased from Vajiralongkorn Dam in Thong Pha Phum district. (Photo by Piyarat Chongcharoen)

Riverside communities in Kanchanaburi province are being warned of likely flooding as irrigation officials increase the discharge rate from Vajiralongkorn Dam in Thong Pha Phum district.

Waiwit Saengpanit, director of Vajiralongkorn dam, said about 25 million cubic metres of water will be discharged from Sept 10-15, up from the planned 20 million cu/m, due to the steady inflow from upstream.

The water level has reached 87.65% of retention capacity. The reservoir can hold up to 1,094 million cu/m of water. The dam inflow is estimated at 1,900-2,000 cu/m of water until the rainy season ends, so officials need to increase the discharge rate.

Mr Waiwit said businesses and communities along the Kwai Noi River in Sai Yok district are being informed of the situation. Authorities will also survey flood-prone areas to keep damage at a minimum.

He said the dam operator will not repeat last year's discharge of huge amounts of water through the dam's spillway gates.

Last year the spillway gates were opened for the first time in 16 years to maintain the reservoir at a manageable level. This caused massive flooding downstream.

The filling of the dam reservoir this rainy season has once again flooded Wat Wang Wiwekaram, which is sited within the reservoir boundary in Sangkhla Buri district. Also known as Wat Tai Nam, it is a featured attraction in the Unseen Thailand tourism campaign.

The temple bell tower and the ordination hall are barely above water.

The ordination hall is expected to be completely under water soon, with only the top 80-90cm still visible.  (continues below photos) 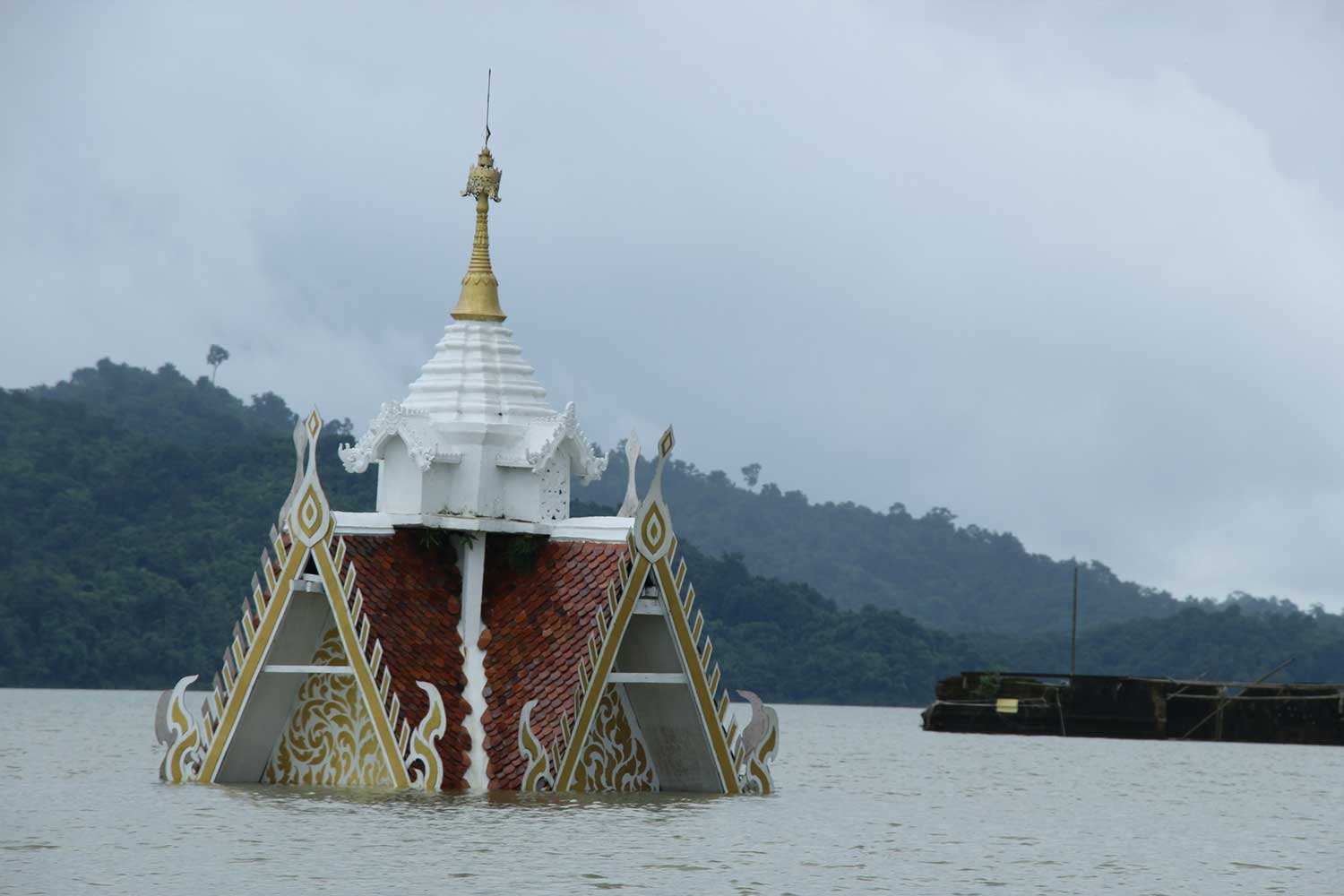 The temple bell tower, (front), and the ordination hall (behind), of Wat Tai Nam, an attraction featured in the Unseen Thailand tourism campaign, are barely above water. (Photo by Piyarat Chongcharoen) 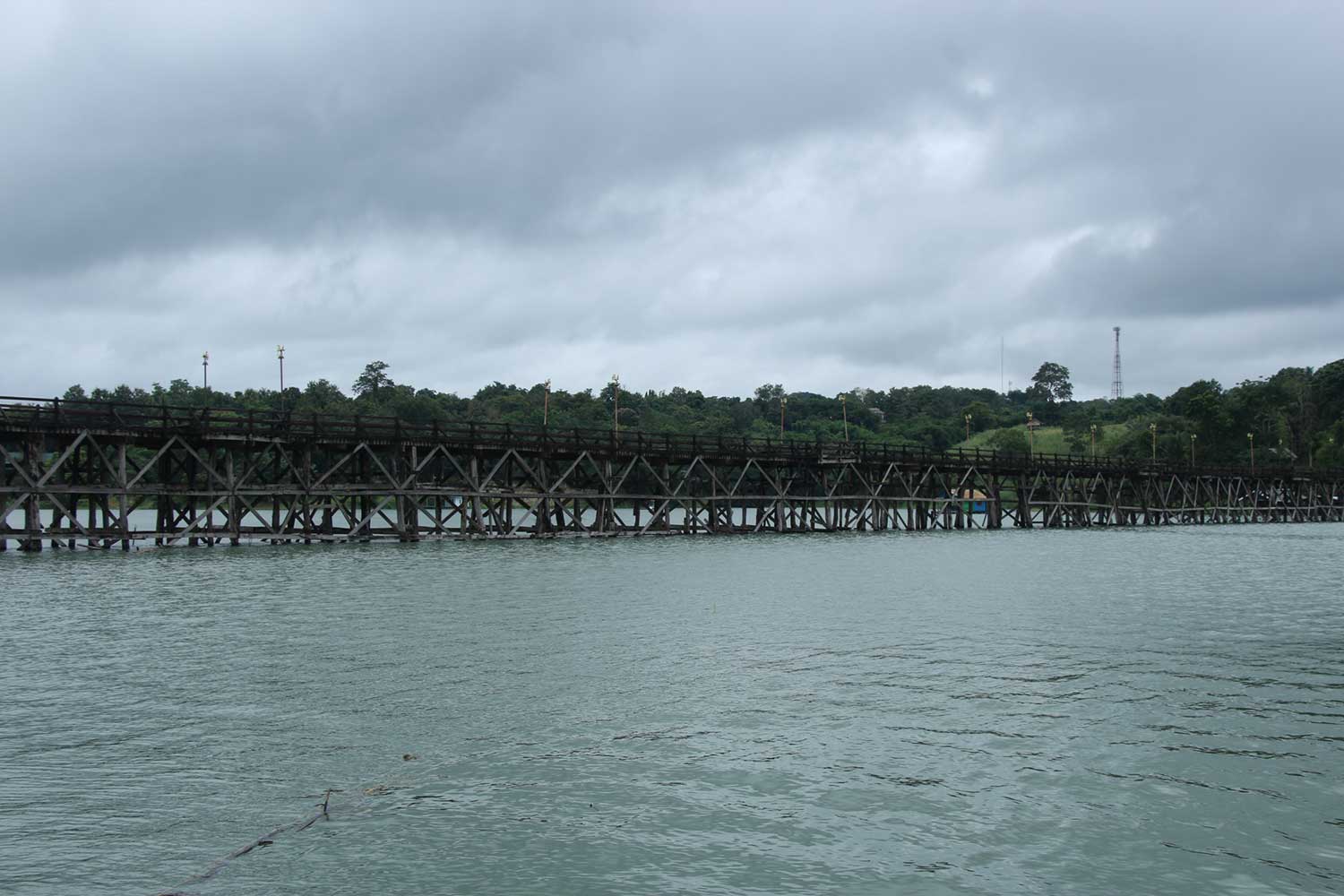 A total of 17 districts in Ubon Ratchathani in the northeastern region, have been declared disaster zones as the flood situation worsened.

By Wednesday morning the Mun River had risen 12 centimetres to 10.67 metres.

In the municipal area of Warin Chamrab district, business operators build flood embankments to protect their premises from a metre-high flood. Schools in the area will remain closed until Monday.

Seventeen of them were declared disaster areas and allocated a budget of 200,000 baht each for flood relief operations.

Forty-eight shelters are up and running in seven districts with more than 4,800 families from 51 communities evacuated there.

He said all sluice gates at Siridhorn and Pak Mun dams were raised to full capacity to speed up drainage of water into the Mekong River and 30 water pumps were installed at a bridge across the Mun River in Warin Chamrap district.

A 6km stretch of the highway was under 30-70cm of flood water and impassible by small vehicles. Flat bottom boats were provided to transport people who need to travel between the two districts. 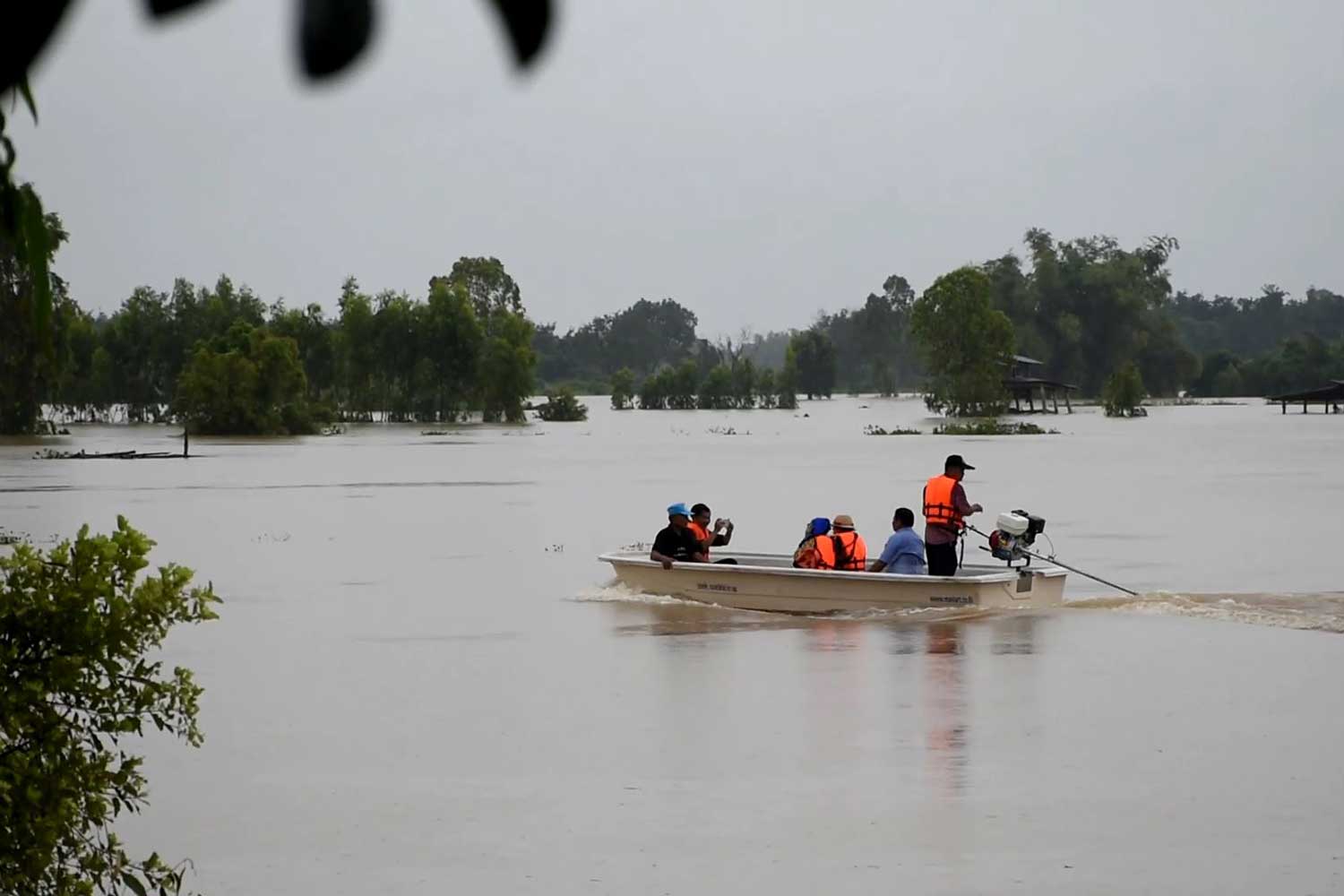 A boat takes people across a flooded area as the Mun River overflows into communities in Yang Chum Noi district of Si Sa Ket province in the Northeast. (Photo by Sanoh Worarak)

NAKHON SI THAMMARAT: A man was shot dead after he and another man went into the grounds of a house in Nopphitam district in the small hours on Monday as the house owner thought they were burglars, police said.