Face masks the order of the day in Hat Yai municipality as smoke haze from Indonesian forest fires moves in and air quality plummets. (Photo by Assawin Pakkawan)

SONGKHLA: The annual haze from forest fires in Indonesia is again making life unpleasant in parts of the South, with fine-dust readings in Songkhla and Satun once more at hazardous levels - a problem shared with neighbours Malaysia and Singapore.

In Hat Yai, local authorities have begun handing out face masks to residents and tourists. In Trang, masks are being delivered to district offices for distribution.

The Region 16 Environmental Office in Songkhla province on Friday reported the level of PM2.5 at 54 microgrammes per cubic metre of air, which exceeded the safe threshold set at 50 in Thailand. Satun was also above 50, but other provinces remained in the safe zone.

The Pollution Control Department, however, reported the PM2.5 level in Hat Yai, Songkhla, at 69, the worst in the southern region, followed by Muang district of Satun at 59.

The Region 16 office advised people in Hat Yai to wear masks for outdoor activities, and immediately consult doctors if they have breathing problems.

The Health and Environmental Office of Hat Yai Municipality handed out masks for to residents and tourists in the city, having previously stocked up on 250,000 of them.

Office director Punyaporn Saensrichan said the situation was being closely monitored and they would buy more masks to ensure there were enough on hand if the situation deteriorates.

In Trang, the Provincial Health Office delivered 12,000 masks to district offices to prepare for the worst. Provincial health chief Dr Banjerd Sukpipatpanon said the dust level in the province was measured at 40.

The annual forest fires from the nearby island of Sumatra, in Indonesia are sending wind-born smoke and ash to across other Southeast Asian countries, also including Singapore and Malaysia. (continues below) 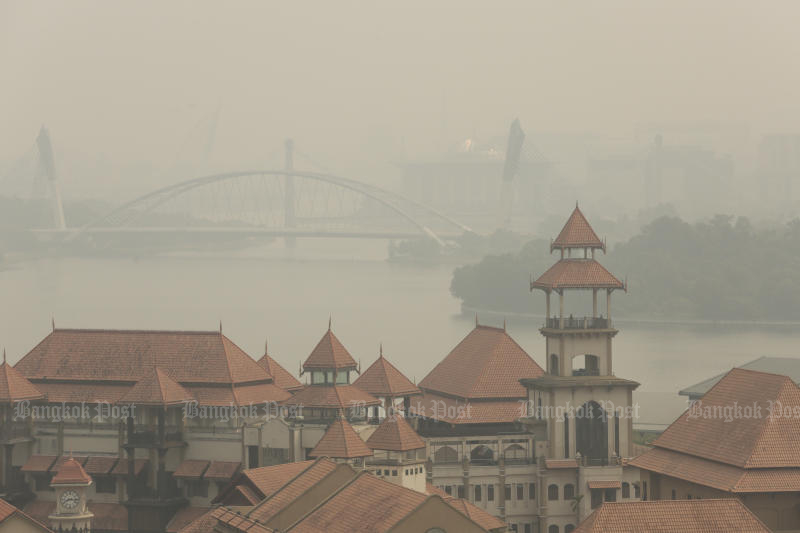 In Singapore, with students to head back to classes on Monday after a week-long break, schools have issued advisories to parents outlining precautions they are taking to mitigate students’ exposure to the haze.

Households in the city-state are expected to spend an extra S$15 million (332 million baht) on water and electricity should the haze come in full force and the Pollutant Standards Index readings double, said Sumit Agarwal, a professor at the National University of Singapore Business School.

The haze is also likely to impact tourism, said Agarwal. A doubling of PSI readings would lead to hotel revenues falling by an estimated S$280,000. “We observe risk avoidance behaviours not only among locals but also in foreigners who avoid visits to Singapore and other haze-affected cities in this region,” he said.

Malaysian Prime Minister Mahathir Mohamad and the Indonesian president struck a cordial tone with each other. Mahathir wrote a letter to Jokowi, as Widodo is known, offering help to put out the forest fires -- the two countries’ environment ministers took a less amiable tone, laying blame on each other's country for the haze.