Thongphun Un-chit could not believe his eyes when he spotted a Thai crane foraging for food in a neighbour's rice field in Buri Ram's Muang district back in 2011.

The last reported sighting of a Thai crane -- also known as the Eastern Sarus crane -- which is native to the area along the Thai-Cambodian border, was back in 1968, when Mr Thongphun was only eight years old.

"It looked very friendly and it didn't seem to be afraid of me," recalled the village head of Ban Sawai So. 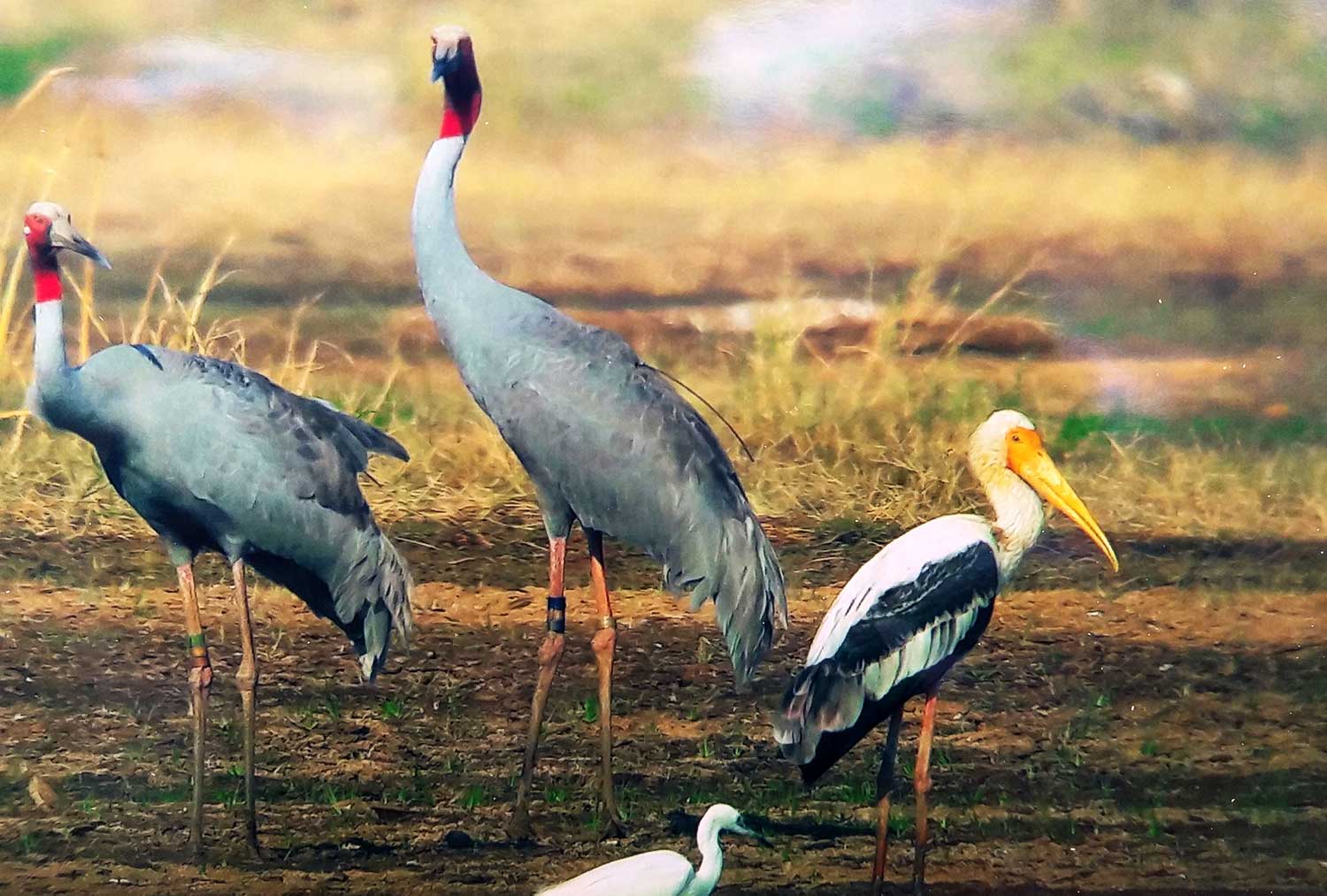 "My eyes were fixed on the bird for several minutes. It is still one of my greatest moments in my life." — Thongphun Un-chit, village head of Ban Sawai So, Buri Ram

Since then, there have been more sightings of the crane, which was thought to be extinct in Thailand, thanks to the Zoological Park Organisation (ZPO)'s tireless conservation efforts.

"And that's how the people and the crane meet again."

When Mr Thongphun first saw the crane, he was immediately taken by its majestic appearance. The village headman took out his mobile phone and captured the moment in a short video clip.

Mr Thongphun thought he saw a rare Thai crane, but he could not be totally certain of his guess. So he posted the clip on social media, complete with a plea to anyone who could tell him what bird it was.

He then received a reply from the ZPO. 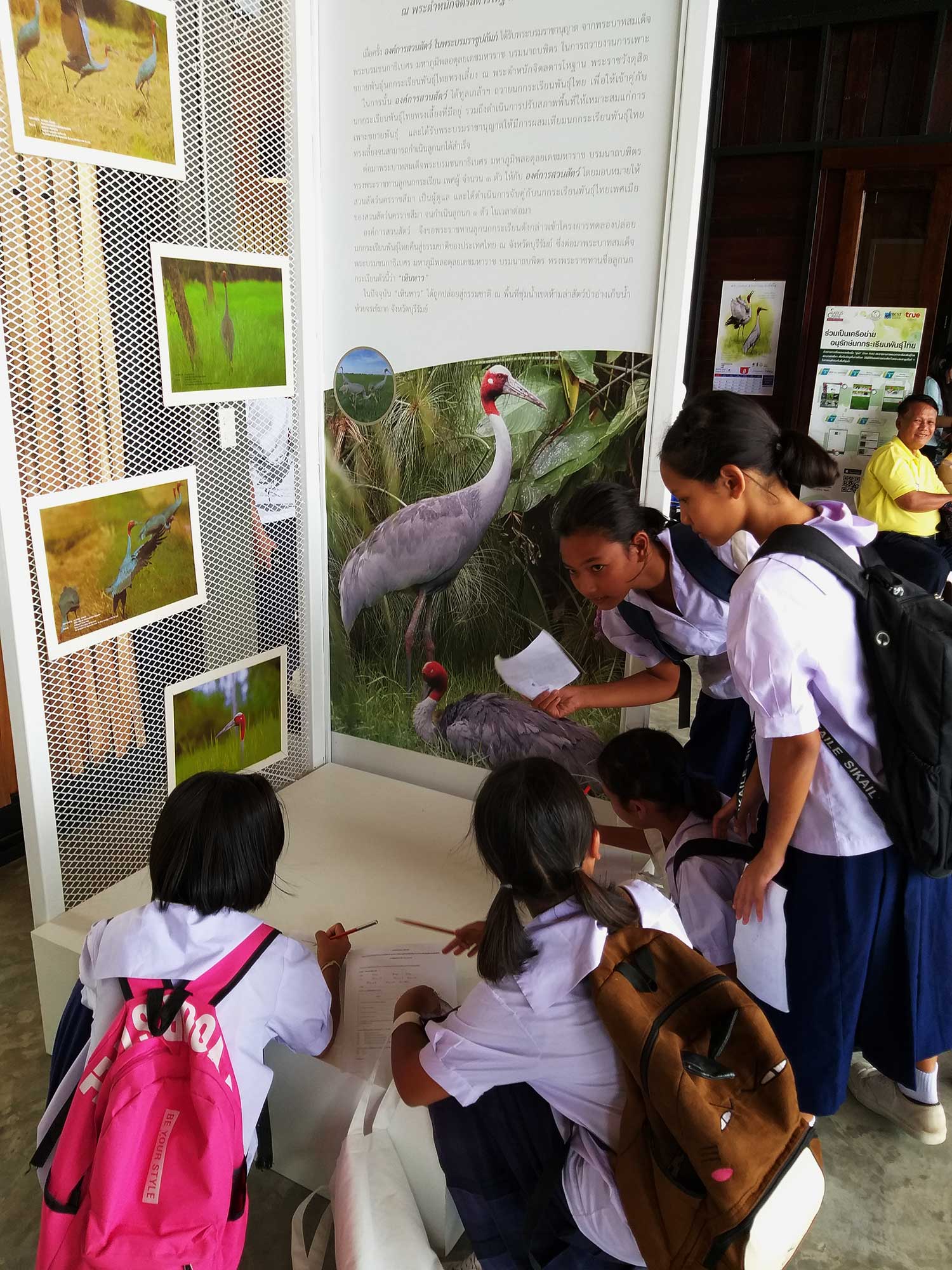 A ZPO officer explained the bird he filmed was most probably one of the 10 Thai cranes which the Nakhon Ratchasima Zoo had bred and released into the wild.

One may have flown over to Buri Ram and landed on the rice field in Ban Sawai So, the officer said.

"I was so thrilled to hear that," he said.

Mr Thongphum could still remember the story he was told as a child, when Thai cranes were still a common sight in Buri Ram and its surrounding provinces.

He never actually saw the bird, nor heard anyone in the neighbourhood who had the privilege of sighting the cranes, dead or alive, until that fateful day in 2011.

"Suddenly, it was right there in front of me. My eyes were fixed on the bird for several minutes. It is still one of my greatest moments in my life," he said. 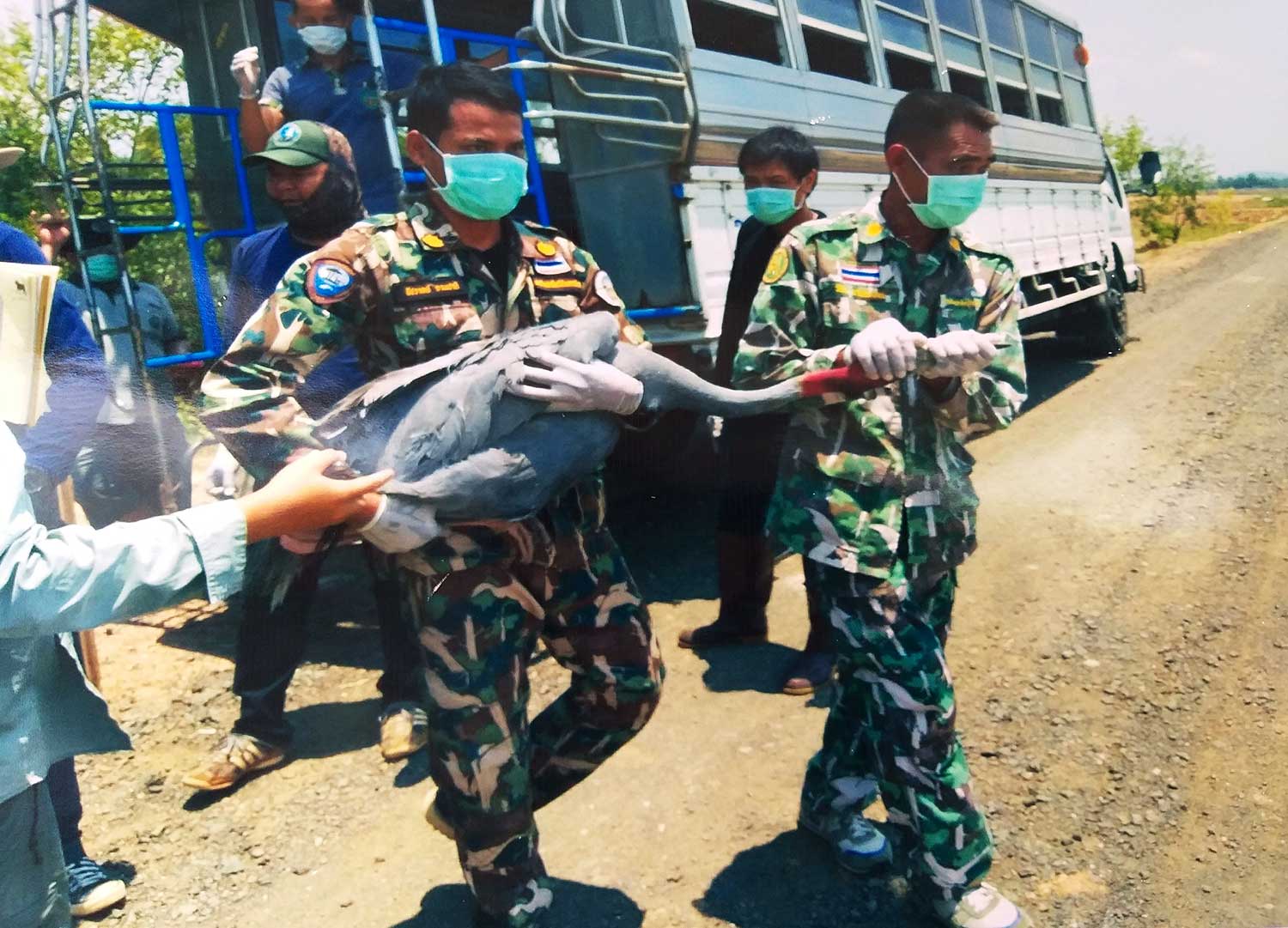 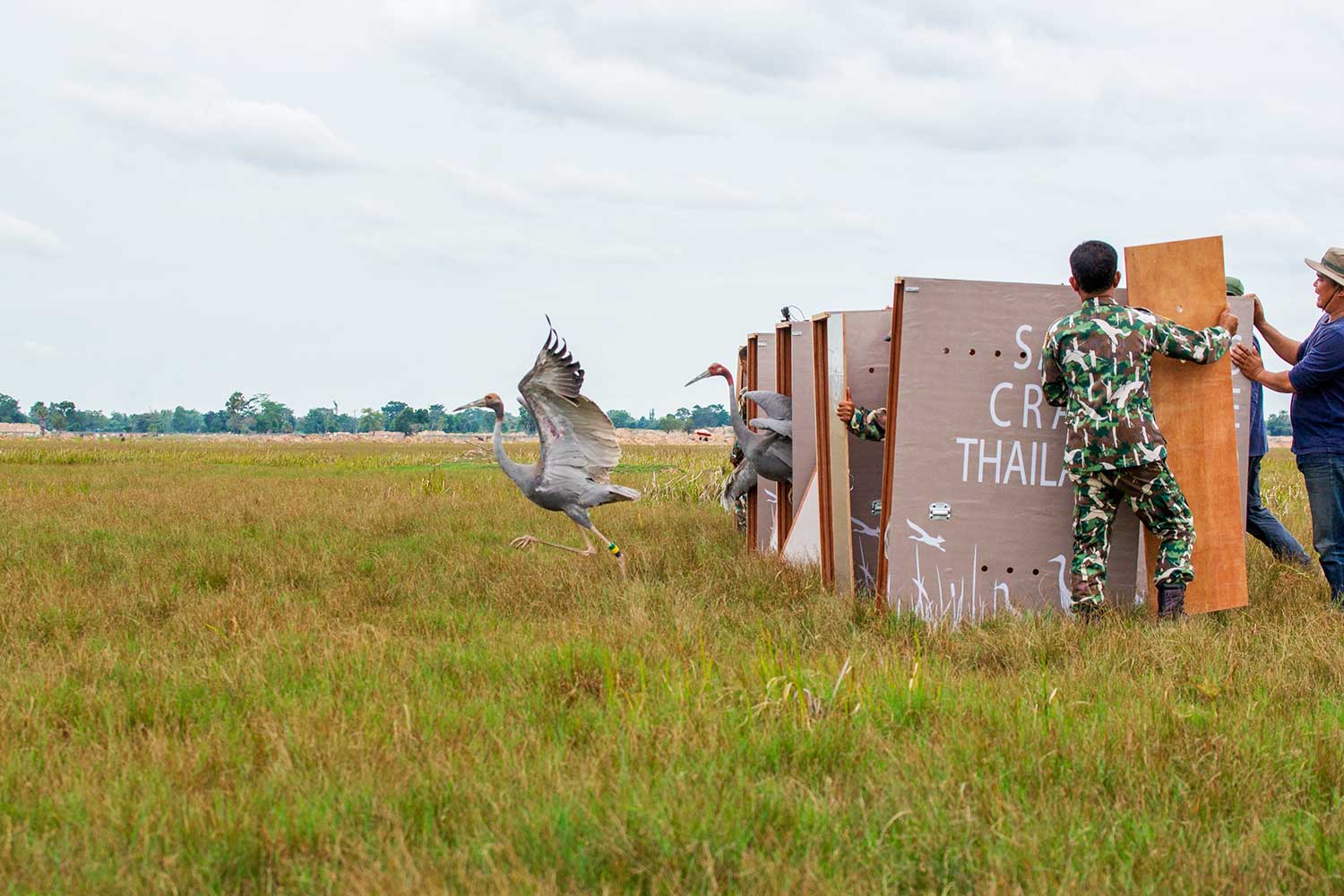 Officials release cranes bred at the Nakhon Ratchasima Zoo into the wild. (Photos by Onnucha Hutasingh and the Department of National Parks, Wildlife and Plant Conservation)

Thai cranes are among the 19 wildlife species protected by the 1992 Wildlife Protection Act. That said, because of the damage to their natural habitat, the species was believed to have gone extinct in the wild in Thailand.

The cranes' disappearance from its natural habitat led to efforts to breed the birds in captivity. Their disappearance kickstarted the International Crane Foundation's (ICF) breeding project, which began in 1982.

The breeding efforts were not successful at first.

Later in 1997, Nakhon Ratchasima Zoo invested in the construction of the country's largest crane breeding facility. In the following year, the zoo received its first pair of Thai cranes, donated by villagers along the Thai-Cambodian border for the zoo's crane breeding project, in which both natural and artificial breeding techniques were employed.

By 2007, a total of 100 Thai crane offsprings were bred. Four years later, the zoo was able to return the first batch of 10 Thai cranes, aged between five and eight years, to the wild.

Nakhon Ratchasima Zoo also presented a pair of Thai cranes to His Majesty King Bhumibol the Great, which were kept at Chitralada Palace.

The late king later granted permission for the male crane to be mated with a female crane from the zoo. The offspring, which the late king named "Hoen Hao", was among the cranes returned to the wild at Huai Chorakhe reservoir.

So far, 115 Thai cranes bred in captivity by the ZPO have found new homes in the wild.

According to the ZPO, Thai cranes are not a migratory species. Native to Southeast Asia, the birds typically live with their mate until either of them dies. Their natural habitats are found close to shallow ponds and they feed on plants and small animals.

"Humans pose the biggest threat to Thai cranes' existence. The birds were hunted for their meat and eggs," said Mr Thongphun.

Hunting, however, has decreased considerably as conservation campaigns gained traction in recent years, raising public awareness about the dwindling population of the cranes, he said.

However, the threat remains as excessive use of chemicals in farming endanger both the birds and their prey. Chemical residue often gets washed into natural ponds, killing off plants and small animals which the cranes feed on.

Without sufficient food, the birds are forced to move elsewhere outside of their natural range.

Early last month, 10 more cranes were released by the ZPO to coincide with the opening of a centre for conservation of swampland and Thai cranes in Buri Ram.

The centre was established by the ZPO in conjunction with its partners including the Buriram Sugar Plc, Thai Airasia and other local organisations.

The purpose of the centre is to hammer home the critical message about the importance of conserving Thai cranes and their natural swampland habitat. Many swamps can also be developed as valuable ecotourism sites, which can also double as a public educational site for those interested.

True Corporation, a project partner, has developed a smartphone application called "Doo Nok" or "Bird Watch", which can be used to identify the variety of bird species who live near Huai Chorakhe reservoir.

Visitors can also use the application to access more than 500 additional photographs of local birds in the area, as well as information which has been compiled and verified to comply with professional and academic standards.

The app can be downloaded in both the iOS App store and Google Play store.

That said, app users are reminded to keep a distance of at least 200 metres from the birds during a sighting trip.

As the centre is expected to draw a large number of visitors, Buriram Sugar Plc, a project partner, is supplying the centre with biodegradable food containers made of sugarcane paper, which degrades 14 days after use.

Local residents have also voiced suggestions to take the environmental conservation cause even further.

Pratthana Ounchit, 49, president of a community enterprise group in Ban Sawai So, said a ban against littering at the centre should be put in place, as the birds may eat discarded food, or even plastic containers, which they cannot digest.