Oath debate to end by 6pm

Prime Minister Prayut Chan-o-cha returns the wai of Deputy Prime Minister Somkid Jatusripitak, left, in parliament as the opposition launches its grilling of the prime minister on Wednesday morning. (Photo by Wichan Charoenkiatpakul)

The opposition will conclude its debate on Prime Minister Prayut Chan-o-cha’s failure to recite the complete oath of office by 6pm, so cabinet members can attend a ceremony for the late King at Dusit Palace.

Opposition chief whip Suthin Khlangsaeng said before the debate began on Wednesday that a religious ceremony to pay tribute to Rama IX was scheduled for 6pm. The seven-party opposition would cooperate and conclude the debate in time to ensure all cabinet ministers were free to attend the ceremony.

The debate, which began at 9.30am, would not last beyond 6pm. The number of speakers remained unchanged at 15, but the time allocated to each of them would be shortened with all speakers keeping their contributions to the point, the opposition chief whip said.

He warned the government not to cause a disturbance during the debate as the opposition had only limited time to get its argument across.

“There might be attempts to disturb the debate by asking government MPs to delay signing their names to attend a parliament meeting, in a bid to have the meeting open late. A Constitutional Court ruling (on Gen Prayut’s qualifications), protests by MPs, a closed-door meeting and other attempts to have the debate end sooner, around 4-5pm, may be cited by government MPs." Mr Suthin said.

"Walkouts by opposition MPs may be the last resort, if necessary.’’ .

Gen Prayut arrived at parliament on Wednesday morning to attend the debate.

His Majesty the King has designated Gen Surayud Chulanont, acting president of the Privy Council, to preside over the ceremony this evening, with the Supreme Patriarch serving as chairman of the clergy.

A total of 159 Buddhist monks are to attend the ceremony to pay tribute to the late King Bhumibol Adulyadej and bless His Majesty the King, Her Majesty Queen Sirikit the Queen Mother, and Her Majesty the Queen, Thai media reported. 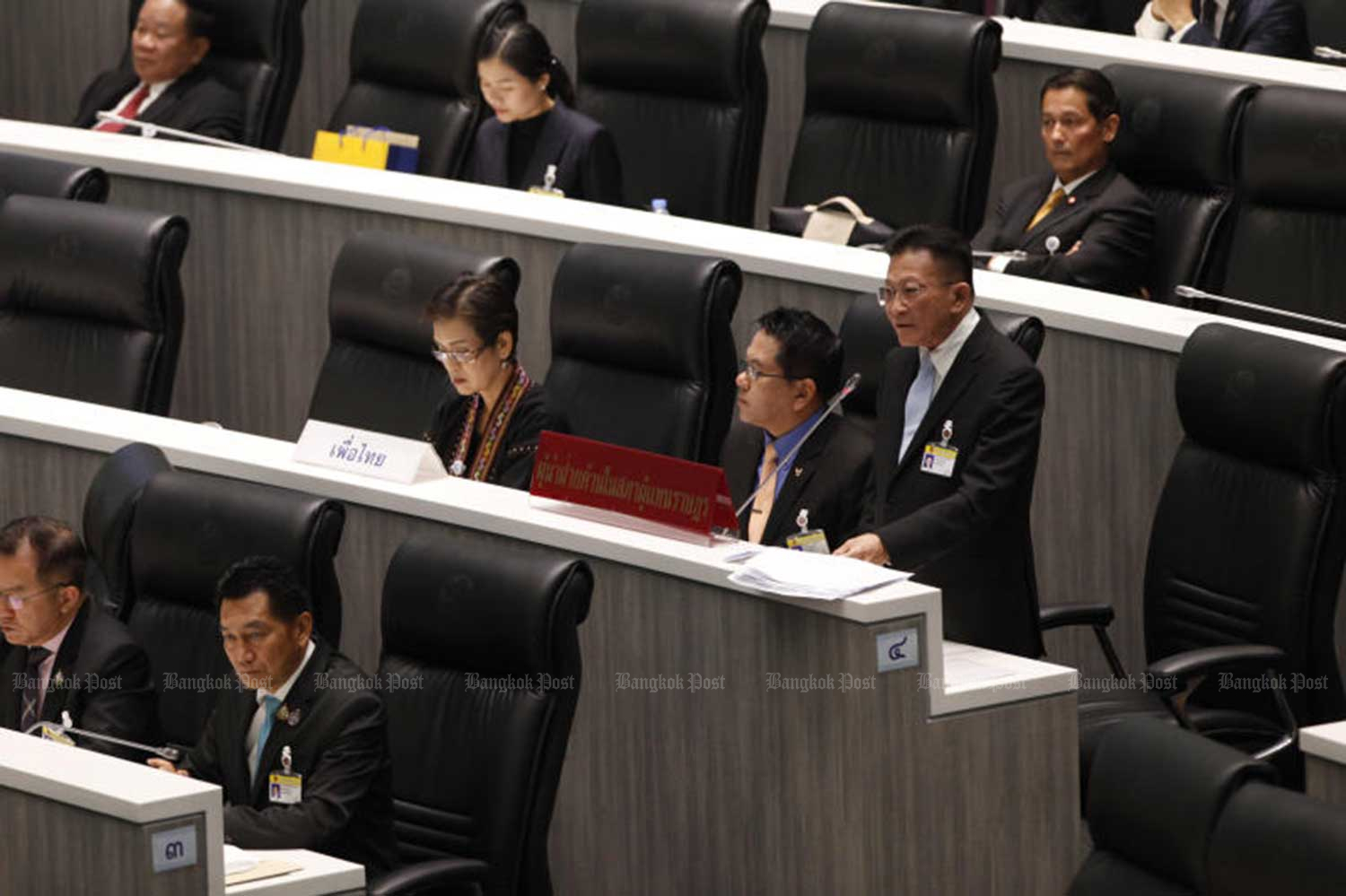 Pheu Thai Party and opposition leader Sompong Amornwiwat speaks during the debate in the House on Wednesday. (Photo by Wichan Charoenkiatpakul)