Police to ask for autopsy results on 'pretty'
Thailand
General

Police to ask for autopsy results on 'pretty'

Police investigators will ask for the post-mortem results of Lunlabelle, a young product presenter, and believe they can solve her mysterious death at a male companion’s Bangkok condominium within 48 hours.

The family of the woman has pinned their hopes on a Line chat coversation that could shed light on her death.

Pol Maj Gen Samrit Tongtao, chief of the Metropolitan Police Division 8, on Thursday called a meeting with investigators at Bukkhalo police station to follow up on the investigation of Thitima Naraphanpiphat’s death.

Thitima, 25, also known as Lunlabelle or Belle, was found dead on a lobby sofa at a condo in Talat Phlu of Bangkok’s Thon Buri area in the early hours of Tuesday.

Footage from the condominium security cameras showed a young man carrying an apparently unconscious Thitima into the building around 6pm on Monday, and then taking her to a room on the sixth floor. After a few hours, the same man put her on the sofa in the lobby where she was later found dead.

A doctor’s preliminary examination suggested that she died of heart failure.

Pol Maj Gen Samrit earlier said hers was an unnatural death. An initial inspection found no traces of drugs or other substances in her body but it was not clear whether they had tested her for alcohol.

Speaking after the meeting, Pol Maj Gen Samrit said the investigation had progressed by 80%, but more time was needed as other documentary evidence had yet to be made official.

Citing a doctor who performed the autopsy, Thai media reported on Wednesday fluids were found in her vagina and there were traces of vaginal tear, but police have not confirmed it.

Pol Maj Gen Samrit said Pol Col Phong Iemsakul, chief of Bukkhalo police, would meet the doctors who performed the autopsy as the investigation team had yet to receive an official report on the post-mortem examination.

If fluids were found as reported, the investigators would ask for the results in writing so they could seek an arrest warrant from the court, said Pol Maj Gen Samrit.

A TV talk show revealed the chat messages in a Line group of which Rachadech Wongtabutr, 24, or Nam Oun, the prime suspect in the case, was allegedly a member. The person believed to be him had chatted with the group before and possibly after Belle died. 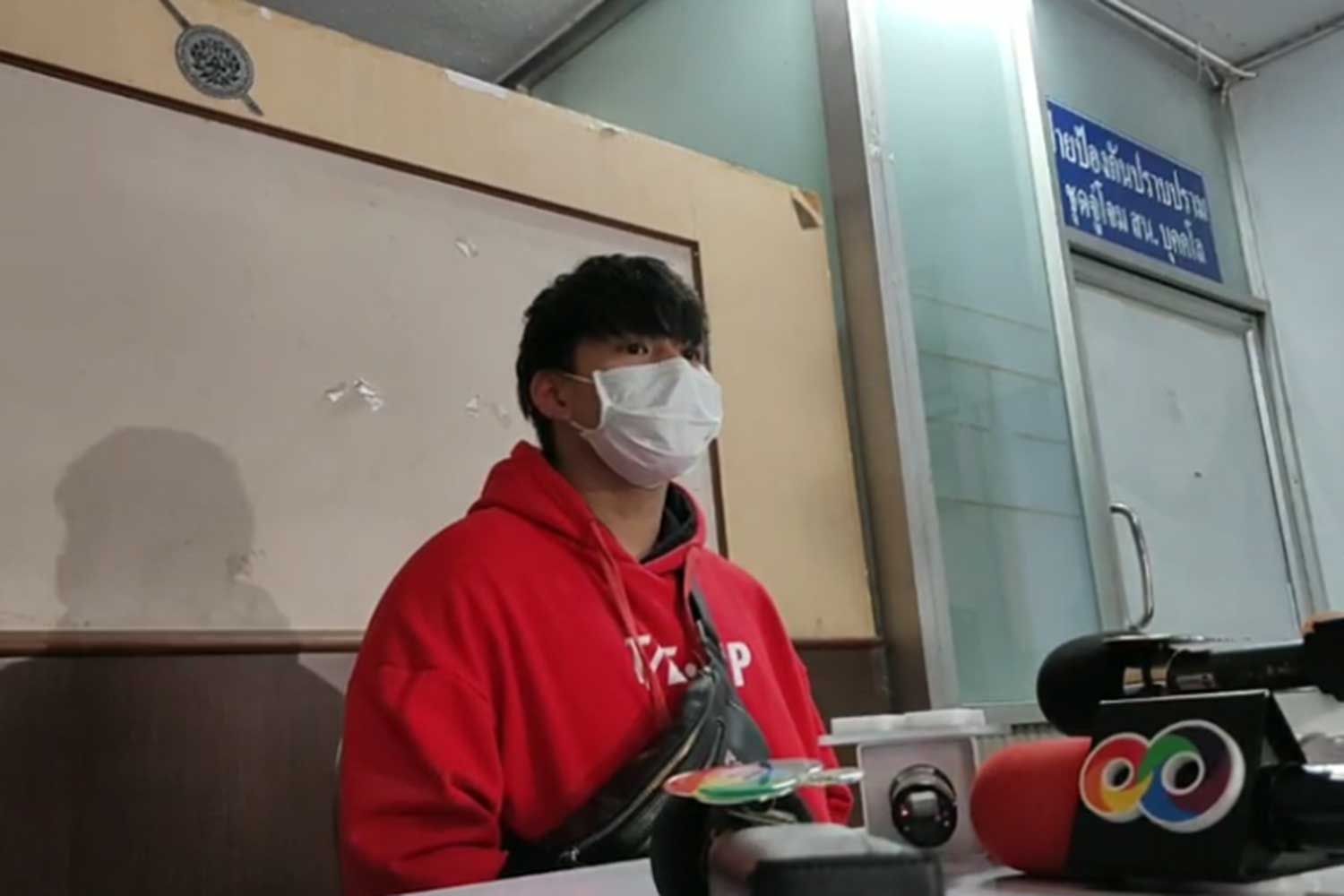 Rachadech Wongtabutr, or Nam Oun, 24, is being questioned about the death of a presenter whose body was found on a sofa at his condominium building early on Tuesday. (Photo taken from FM91bkk.com)

Mr Rachadech might have drugged the woman, which led to the death, said the police commander. Police were compiling evidence about the timeline.

He insisted the case was not complicated and it would become clear 48 hours from now.

During the interrogation, Mr Rachadech, who also works as product presenter or “pretty boy’’, told police on Wednesday that he and some friends, including Thitima, were drinking at a house where they were hired to work in Bang Bua Thong area of Nonthaburi. He said Thitima had several glasses of alcohol, became drunk and then unconscious. He then took her to his condo.

Thitima’s boyfriend, Natthanai Homthianthong, 31, on Thursday gave his statement and the chat messages given to him by someone from the same Line group to police at Bukkhalo police station. 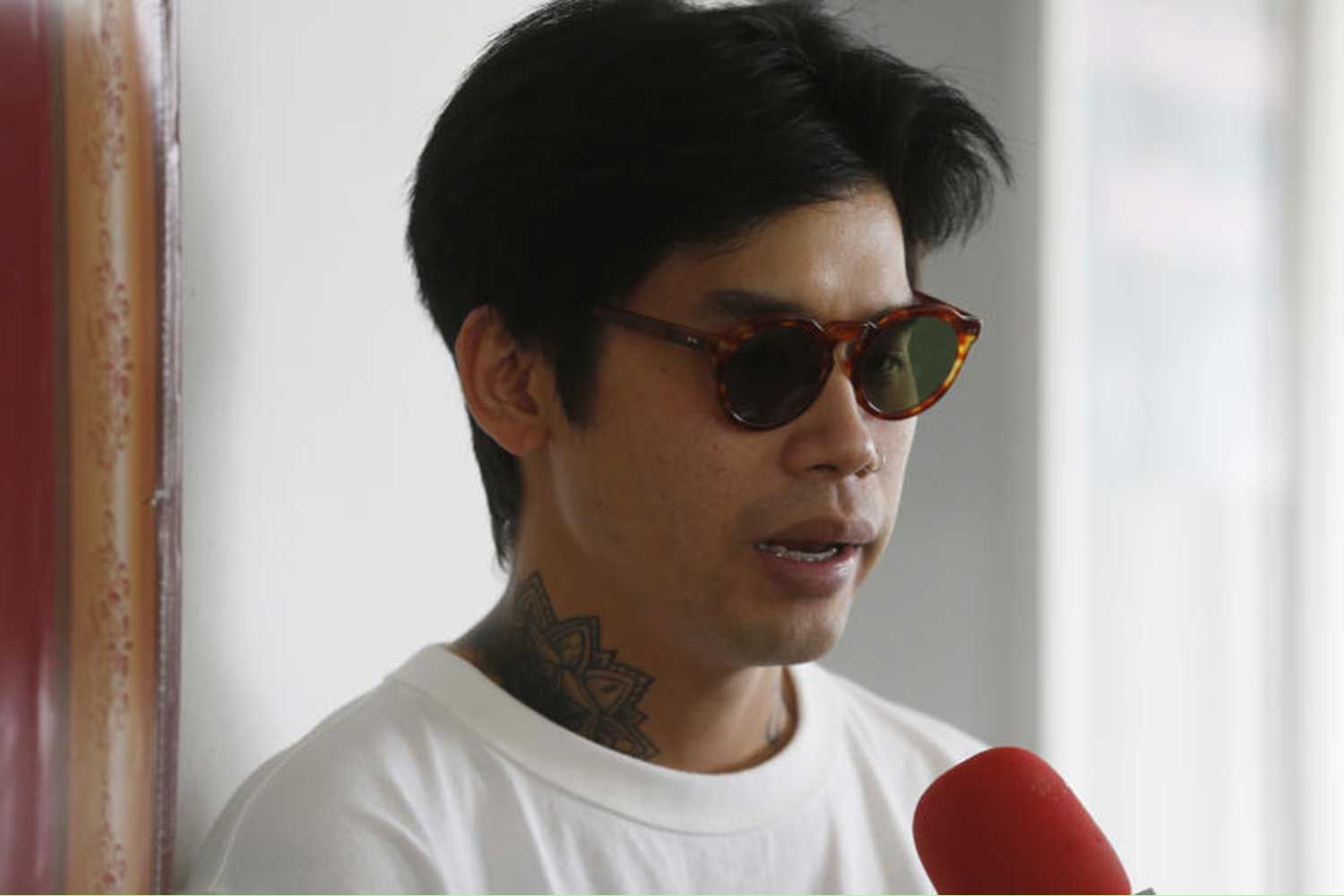 Natthanai Homthianthong, 31, boyfriend of the dead pretty “Lunlabelle’’ gives evidence to police at Bukkhala police station. He says “We pin our hope on this piece of evidence that will turn a “person of interest’’ into the culprit’’ (Photo by Pornprom Satrabhaya)

Mr Natthanai said the chat messages were a conservation between Mr Rachadech and his friends. He did not know how many people there were in the group, which also featured the photos of Thitima.

"We wonder why nobody knew when Nam Oun (Rachadech’s nickname) took Belle from the house in Bang Bua Thong. I personally don't believe everybody was sleeping at the time like they told police.

"I don’t know what Nam Oun told police. But to me, he told a lie. We'll let police investigate whether the chat messages are real or not. We're pinning our hope on this piece of evidence, which should turn a person of interest into a suspect," said the woman’s boyfriend.

Thai media reported a set of Line chat screenshots showing a conversation of someone by the name "P.Mhee.Model" in the group while other members and some of their replies were pixellated.

The person posted a photo of an unconscious Thitima in a car at 4.48pm on Monday. Another member wrote: "Next time, have her drink only a little".

A photo of the woman in front of a lift was posted at 6.17pm with a message: "What should I do next?" Someone replied: "Carry her inside and clean her up."

At 7.27pm, a message read: "Her eyes are unfocused and he mouth is foaming. I thought RIP."

"At first I was told four bottles till drunk, so I gave her plenty."

Another message at 12.54pm read: "I couldn't wake her up." Then a reply: "Throw water at her. Do whatever it takes. It's no longer funny. Feel her pulse."

After a few pixellated replies, the person posted at 1.41am: "So tired. Just carried her down to lobby."