Procession for the ages
Thailand
General

Procession for the ages

prepping for the big day: The royal navy puts on a rehearsal of the royal barge procession for His Majesty the King comprising 52 barges and boats in preparation for the royal 'kathin' (monk's robe-giving) ceremony next month, including the principal Suphannahong Royal Barge (pictured).

The Oct 24 royal barge procession -- when His Majesty the King will attend the royal kathin (monk's robe-giving) ceremony -- is fast approaching.

His Majesty will travel along the Chao Phraya river in a flotilla of 52 ceremonial barges and boats. The procession will begin at Wasukri pier and end at Wat Arun Ratchawararam. Rehearsals have been underway for months.

The royal barge procession can be traced back to the Ayutthaya period more than 300 years ago. A piece of literature known as lilit phayuha yattra phetphuang, penned by Chao Phraya Phrakang Hon in 1887 during the reign of King Chulalongkorn of the Rattanakosin period, mentioned the launch of the phetphuang royal barge procession, modelled on a similar ceremony in the Ayutthaya period, joined by boats whose masthead figures were elaborately carved into mythical animals.

In the past, other processions by boats served either royal functions or river festivals enjoyed by ordinary people.

The royal procession also signifies the military's mission to defend the nation. In peacetime, men were called to take up positions on the barges and boats in an exercise to prepare them for armed conflicts with rival kingdoms.

The best time for the drill was usually during the rainy season, which coincides with the kathin (monk's robe-giving) ceremony to be presided over by the king.

The royal barge processions in the old days also provided a means of transport for the monarch during important occasions, such as the coronation, the relocation of principal Buddha images from the provinces to Bangkok and the reception of foreign envoys. 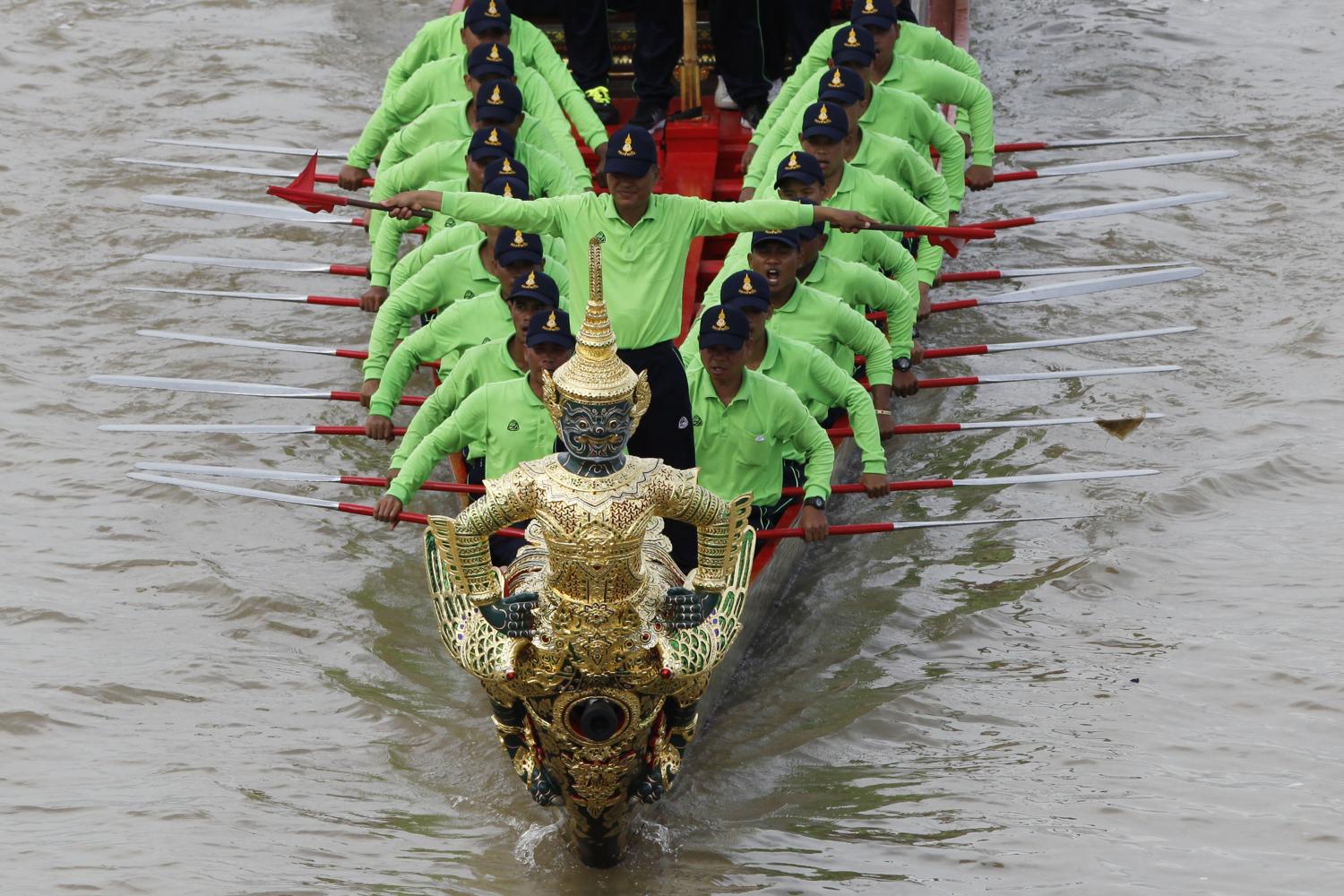 all together now: Oarsmen are given instructions on how to engage in rhythmic paddling aboard an escort barge. 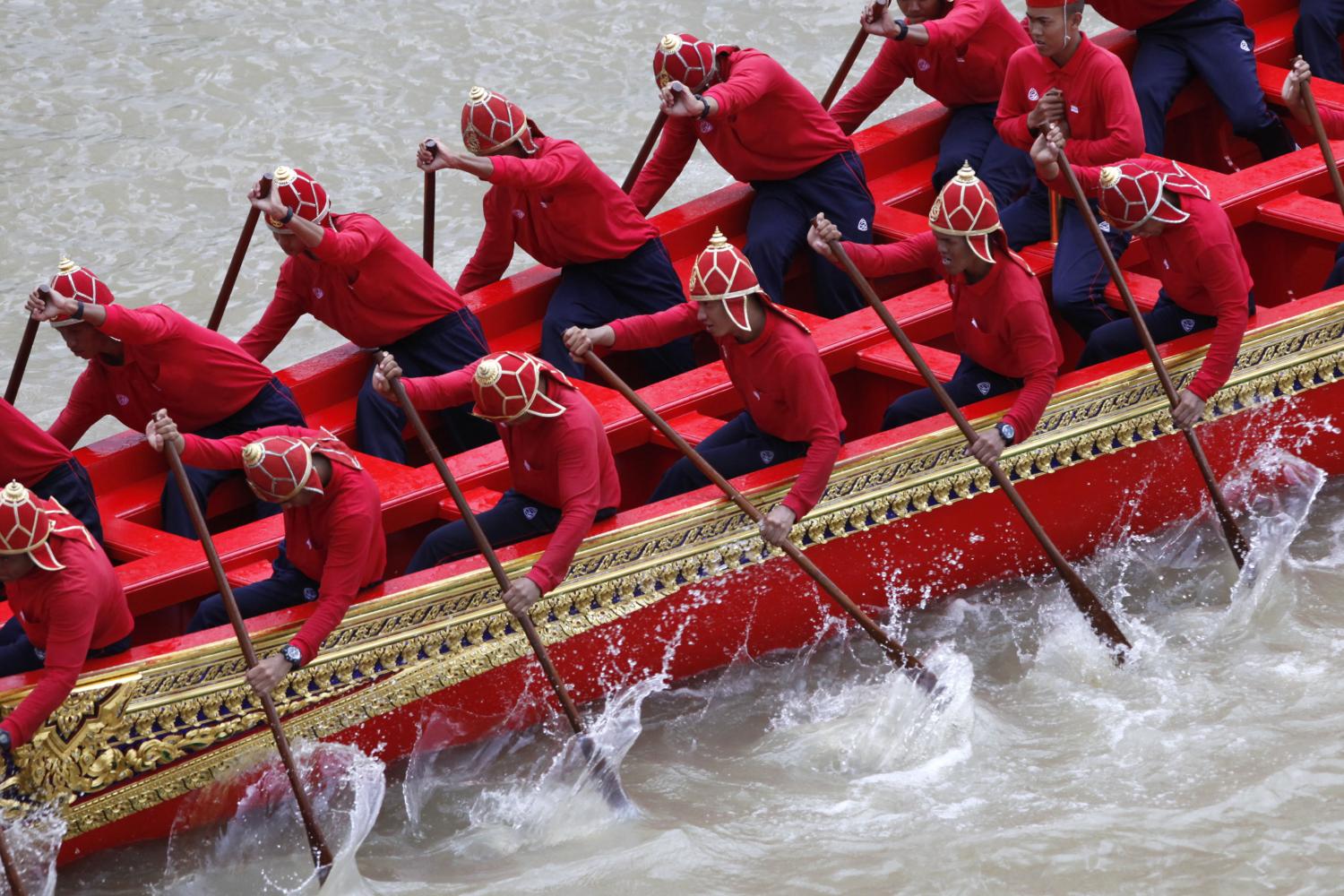 packed with action: Oarsmen in a dress rehearsal go at full steam as they paddle a royal barge. 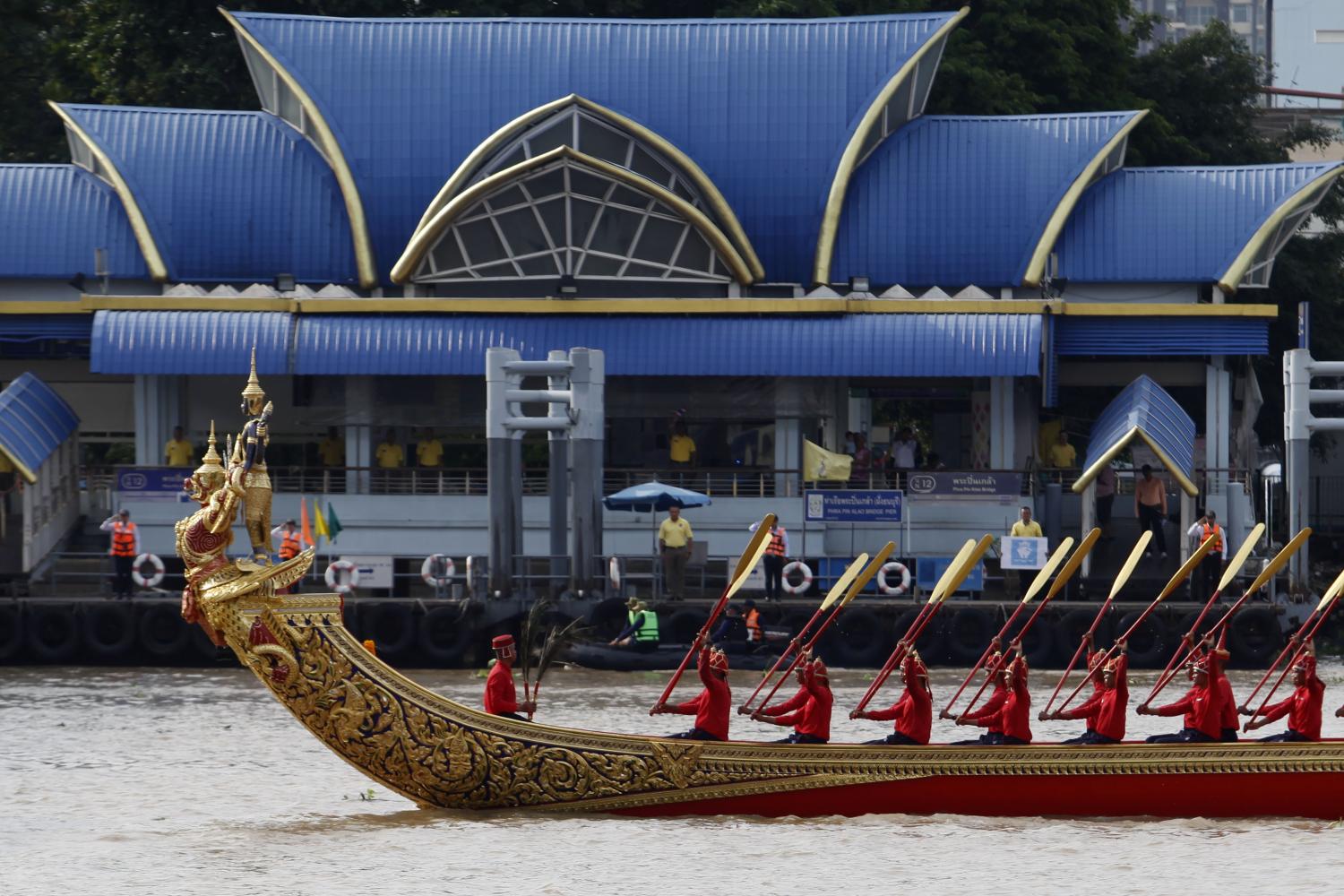 river rituals: Naval personnel show off an elaborate arm-raising paddling movement aboard the Narai Song Suban HM Rama 9 Royal Barge which was built especially for His Majesty King Bhumibol Adulyadej The Great. The barge was constructed by the Fine Arts Department in collaboration with The Royal Navy and the Bureau of the Royal Household. 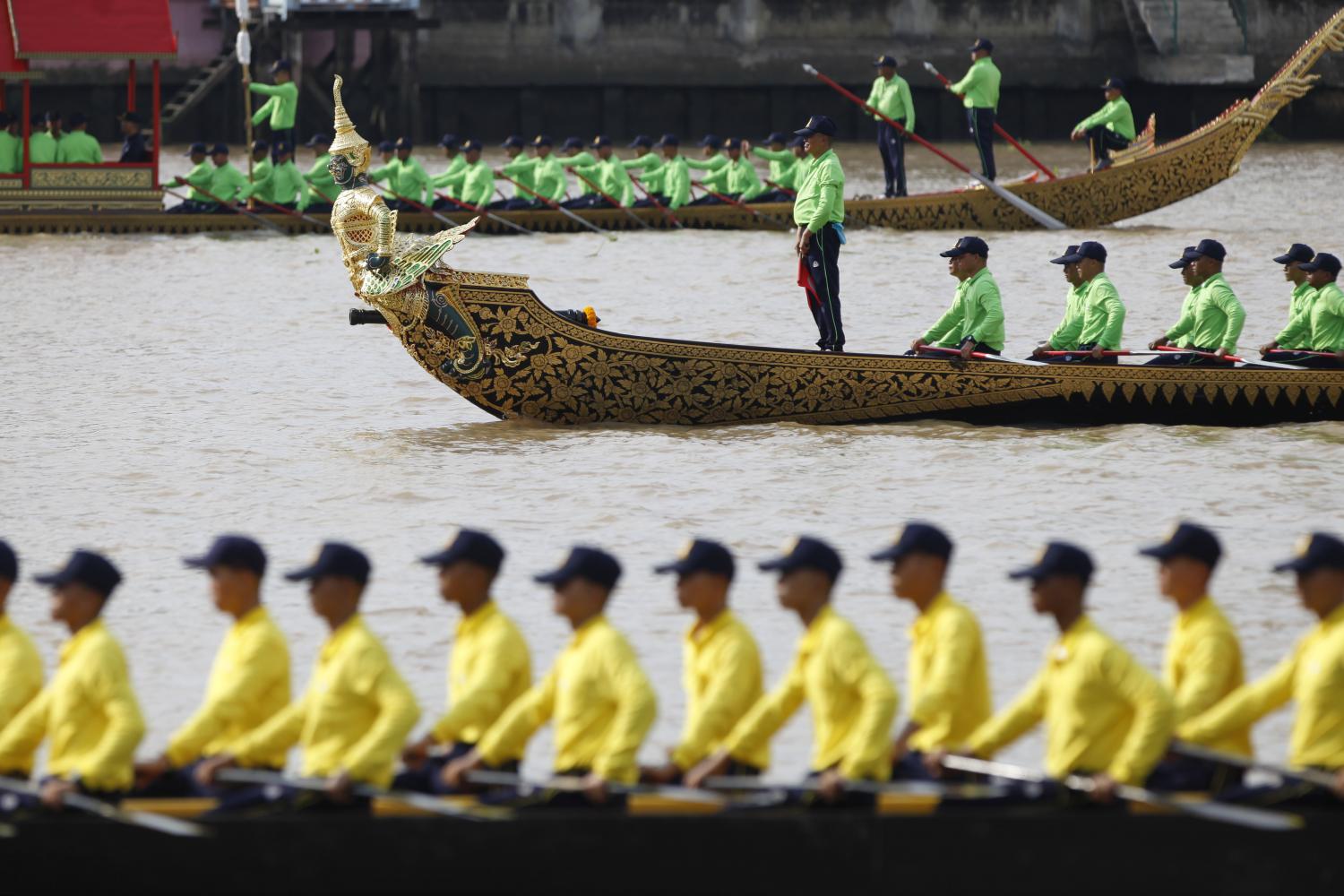 time for an escort: Escort barges are launched in the Chao Phraya river as oarsmen ready for a rehearsal. 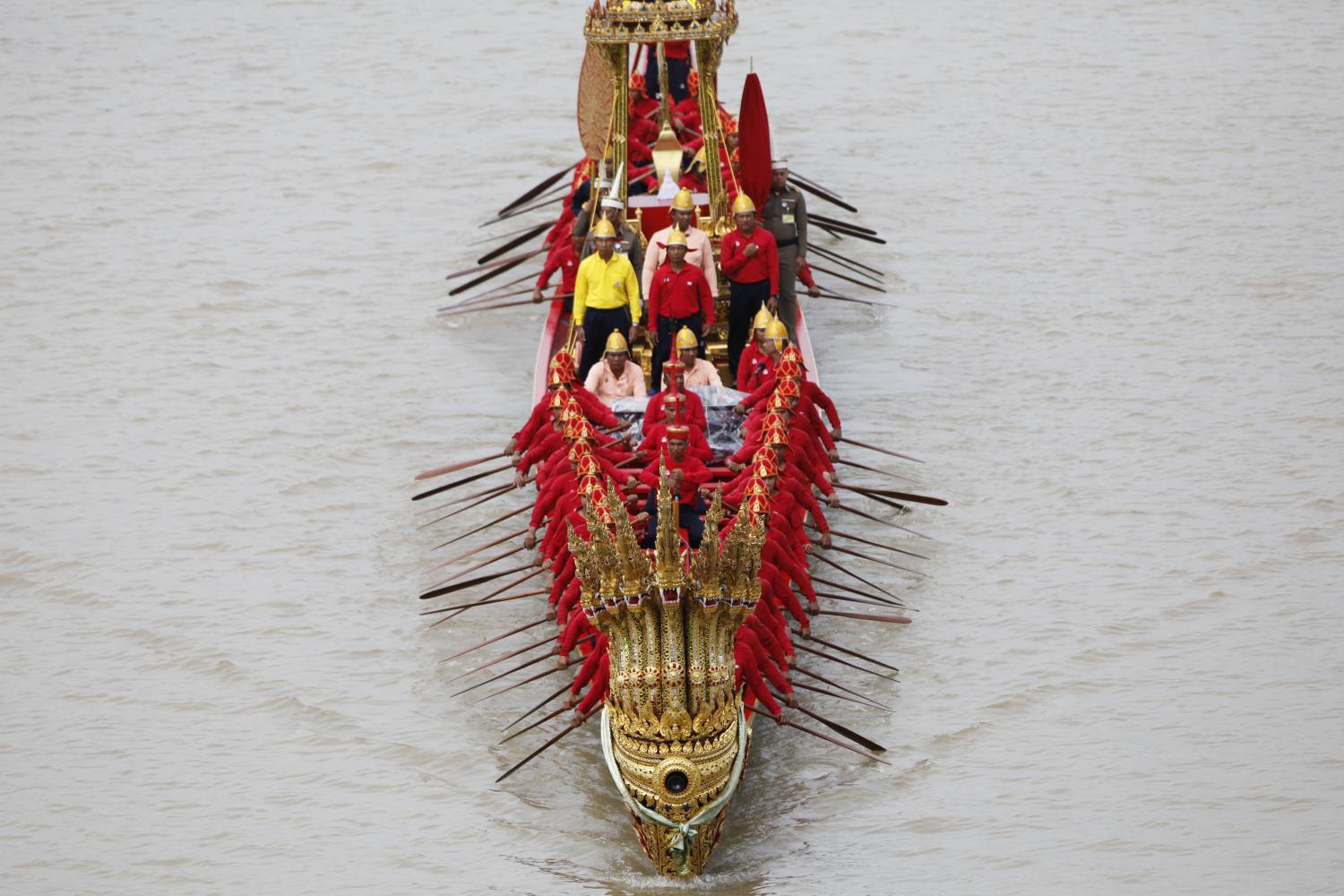 full finery: The Anantanakkharat Royal Barge cruises on the Chao Phraya river during a rehearsal for the royal barge procession, which will be held on Oct 24 to mark His Majesty the King's coronation which took place in early May. 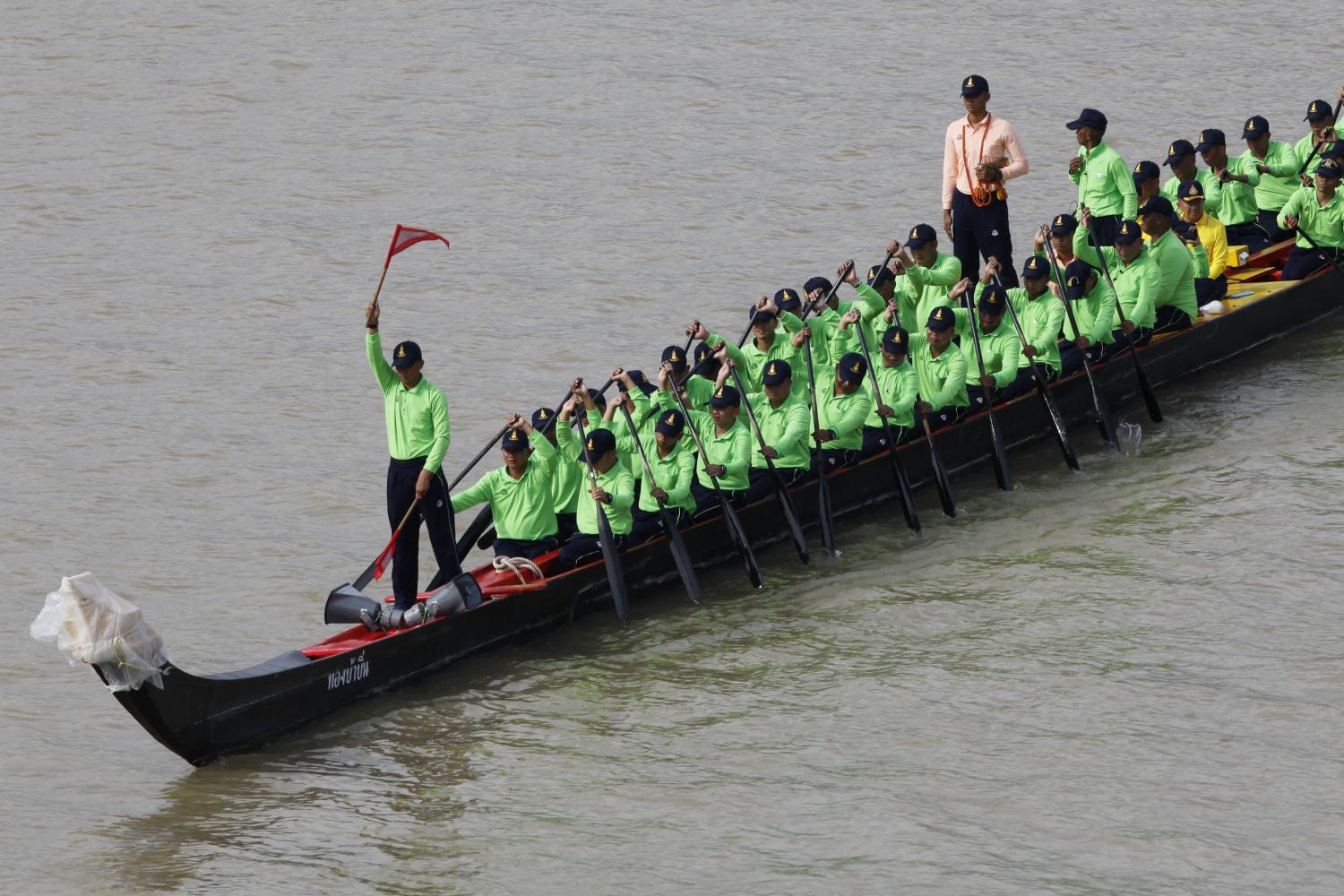 get ready: A signal is given to oarsmen as a vessel is steered slowly to a position in the river to form a procession.