A motorcyclist in Hat Yai district in Songkhla rides on a road shrouded by haze from Indonesian forest fires. (Photo by Assawin Pakkawan)

SONGKHLA: The Hat Yai municipality on Sunday endured the thickest haze yet from the current spate of Indonesian forest fires, while levels of PM2.5 reached the 'dangerous' bracket in Trang and Satun.

The Pollution Control Department reported the level of PM2.5 in the southern business and tourism city to be 79 microgrammes per cubic metre of air on Sunday, the highest level since the current outbreak began. PM 2.5 reached 70 on Thursday.

PM2.5 levels above 50 are deemed unhealthy and a red alert is issued if the level goes beyond 90, according to the department.

Muang district in Satun was the second-worst-hit area, with the small particle reading rising to 66 from 39 on Saturday, while the PM2.5 level in Trang breached the safety threshold for the first time, hitting 52 on Sunday.

Air pollution in Yala's Muang distrct returned to safe levels on Sunday after the municipality was shrouded by dangerous haze from Thursday to Saturday.

"Outdoor activities should be curbed and people should wear face masks when they leave home," the Songkhla Provincial Public Health Office warned. "All doors and windows should be shut to prevent haze entering the house," it added.

The haze obscured the panoramic view of Hat Yai from Kor Hong mountain, one of the top choices for tourists to see the city from above.

Workers at Songkhla Zoo in Muang district had to spray water into the air to alleviate the haze for animals. 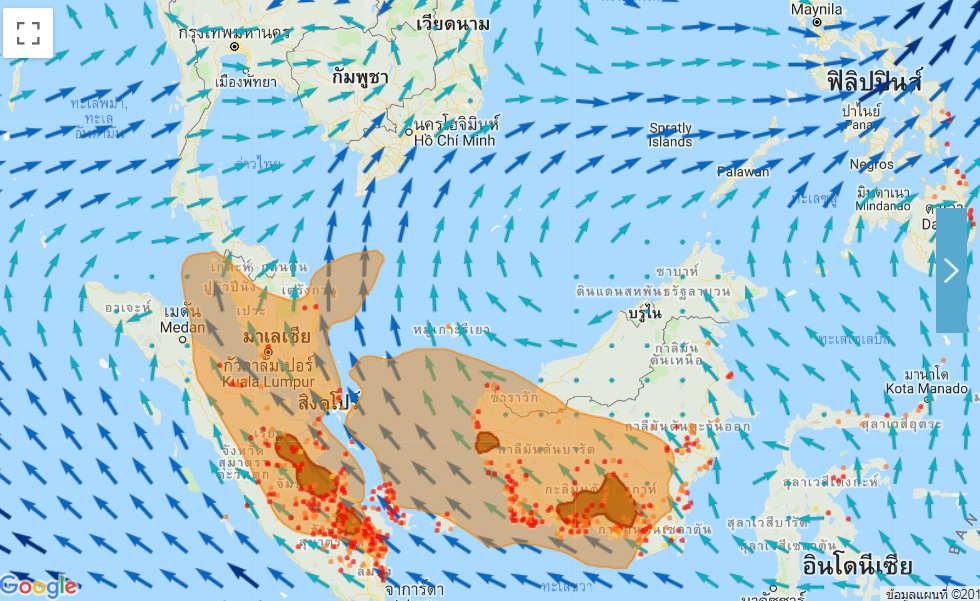 Hot spots in Indonesia and the direction of winds spreading haze to neighbouring countries on Saturday. (Photo from Google Maps via Pollution Control Department)

A satellite image posted on the department's website on Saturday showed hot spots on Borneo and Sumatra islands -- and southeasterly winds blowing in the direction of Singapore, Malaysia and southern Thailand.

Forest fires on the Indonesian islands have caused respiratory problems for 900,000 Indonesians so far.

SEOUL: The mayor of Seoul, a former human rights lawyer and potential South Korean presidential candidate, died in an apparent suicide a day after being accused of sexual harassment.