Pol Lt Gen Montri Yimyaem, centre, commander of the Provincial Police Region 2, and other senior police look at the packs of speed pills and crystal methamphetamine seized from five suspects in Chon Buri and three other provinces, prior to the news conference on Tuesday evening. (Photo by Chaiyot Pupattanapong)

CHON BURI: Pattaya police have made their largest drugs seizure in 10 years - almost a million speed pills and a kilogramme of crystal methamphetamine, valued at 100 million baht - and arrested five suspects.

Arresting officers seized from them 990,000 methamphetamine pills and 1kg of crystal meth, along with three cars and two motorcycles as evidence, Pol Lt Gen Montri Yimyaem, commander of the Provincial Police Region 2, said during a media conference on Tuesday evening.

The seized drugs were worth over 100 million baht, he said.

An officer then went undercover, posing as a drug buyer and contacting a member of the drug network to  make a purchase.

When Mr Supoj, Mr Supanatchakun and Mr Chalermphon showed up to deliver 1kg of crystal meth and 10,000 speed pills in front of a house in Muang district of Nonthaburi, waiting police moved in to arrest them, the provincial police region chief said.

An extended investigation led to the arrest of two more drug suspects, Mr Paithoon and Ms Chonthicha, in Lad Lum Kaew district of Pathum Thani, and seizure of 100,000 speed pills hidden in their pickup truck.

The pair allegedly confessed they had received the drugs from a man identified as Somsak Pandontri.

However, Mr Somsak, alias Bang Ei, managed to flee when police moved to arrest him. He abandoned a Toyota Fortuner with about 700,000 speed pills hidden in it. Police  then searched his house in Suphan Buri and found 100,000 more speed pills buried in the grounds, Pol Lt Gen Montri said.

The hunt for him was continuing.

The five arrested suspects had prior criminal records involving drugs, illegal possession of weapons, fraud and gambling, he said. They were held in police custody for legal action.

A source said the seized drugs had a combined worth of more than 100 million baht. It was the largest seizure by Pattaya police in 10 years. Investigators spent more than two years gathering information that led to the arrest of the five suspects. 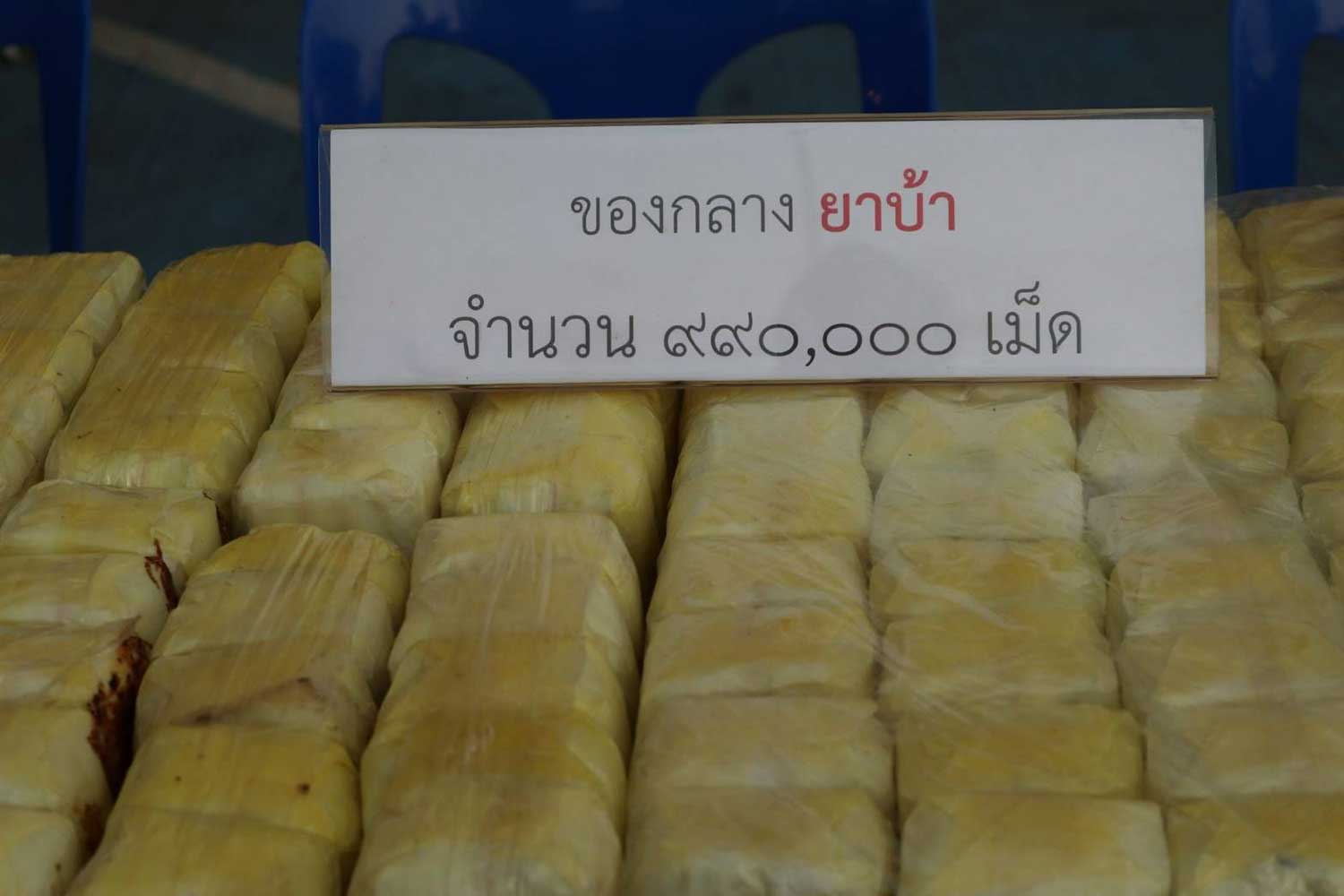 A police sign says these packages contain the 990,000 "yaba" pills seized from suspects during the arrests. (Photo by Chaiyot Pupattanapong)