Two park officials brave the strong current at Haew Narok waterfall as they prepare to dismember a dead wild elephant. (Photo from the Department of National Parks, Wildlife and Plant Conservation)

The corpse of one wild elephant has been dismembered and removed from Haew Narok waterfall as the operation to clear the area was battered by heavy rains over Khao Yai National Park on Friday.

Park officials, with help from veterinarians and volunteers of the Disaster Response Associations of Thailand, decided to dismember the deteriorating flesh of one of the first two wild elephants found floating downstream from the waterfall. The animal was cut into pieces, which were put in big plastic bags and taken to Wat Tha Dan in Muang district in Nakhon Nayok for cremation. 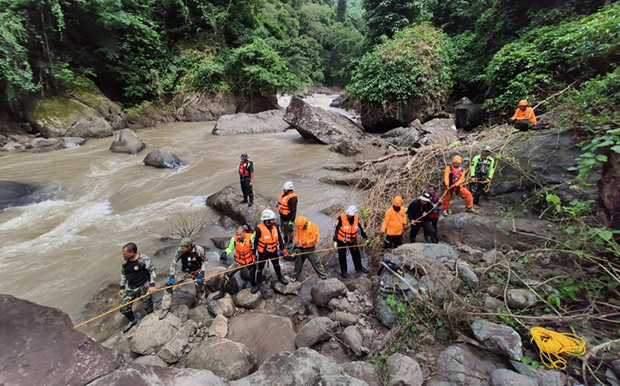 Officials and rescue volunteers took boats upstream along the Ton Sai canal for more than six kilometres and continued on foot for almost three kilometres up to the fifth level of the waterfall on Wednesday. There they found the bodies of two of the wild elephants trapped by rocks that had prevented them from floating downstream. Three more dead elephants floated into the same area on Thursday.

They were among 11 wild elephants found dead at the bottom of Haew Narok, with the first five spotted last Saturday. 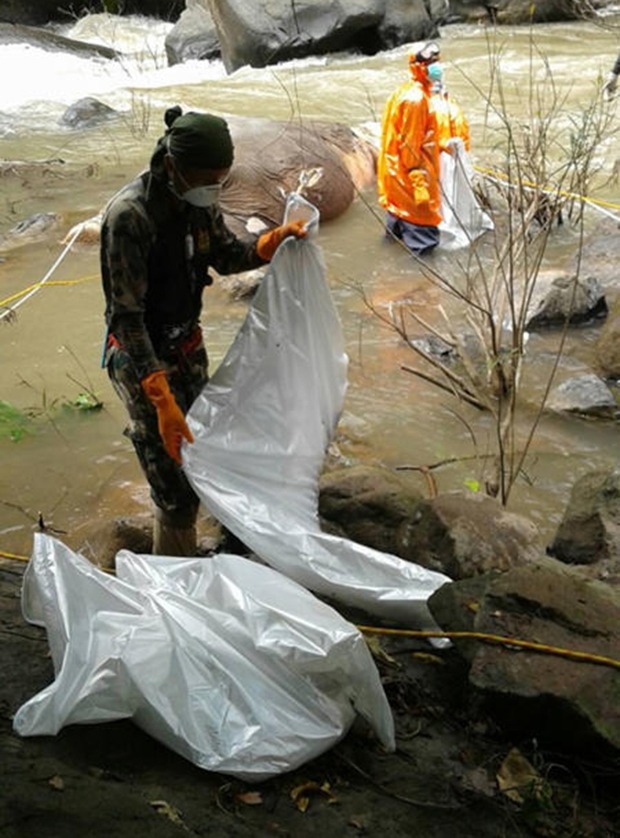 Large plastic bags are being used to hold body parts of the dead elephants. (Photo from the Department of National Parks, Wildlife and Plant Conservation)

Park staff and volunteers have set up two giant nets across the canal to prevent the deteriorating carcasses of the 11 elephants from fouling the water in the Khun Dan Prakan Chon dam, which receives water from the falls.

With rocks making the carcasses difficult to move downstream, they decided to chop them into pieces.

“We will remove all carcasses of wild elephants until the operation is completed,” Witthaya Hongwiengchan, director of the Protected Area 1 Office which also oversees the park, was quoted as saying by INN News.

Park officials and volunteers install nets in a bid to catch the dead elephants.

Heavy rains and swollen streams were posing problems for the operation as the weather made it difficult for officials to manoeuvre the carcasses and also made the trail to the area more dangerous, Mr Witthaya added.

More rain is forecast this weekend in Nakhon Nayok, the province where the waterfall is located, according to the Meteorological Department.