KHON KAEN: A monk who broke into a store to get soap and talcum powder in the early hours of Wednesday morning was shot and fatally wounded by the alarmed owner.

The burglary and shooting at Ban Than Tawan was reported to police in Ubon Ratana district about 3am.  Shop owner Theerapol Theparos was waiting and immdiately handed over a shotgun when police arrived. (continues below) 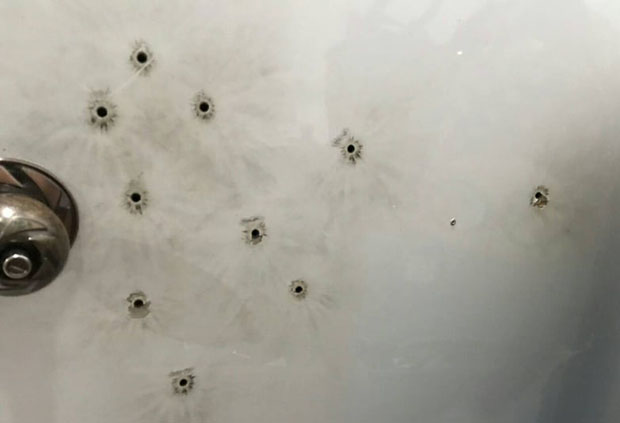 Shotgun pellet holes in the door between the shop and the store owner's sleeping area. (Photo by Chakkrapan Natanri)

Phra Winai Sutthiyano, 48, was lying on the floor inside the shop, bleeding heavily. He was rushed by ambulance to Ubon Ratana Hospital, and declared dead on arrival.

Mr Theerapol told police he fired through a door at a burglar, unaware the intruder was a monk he saw most days collecting alms in the village.

The shop owner said he was asleep in another room and heard noises coming from the shop. "I called out, thinking it might be someone I knew, but there was no answer," he said.

"When I tried to open the door into the shop, something held it shut," he said. Fearing for the safety of his family, he fired his shotgun through the closed door into the store, Mr Theerapol said.

When he then managed to open the door, he found a monk collapsed on the floor on the other side.

Ubon Ratana police chief Naris Piakas said two bars of soap and a can of talcum powder from the shop were found in the monk's bag. (continues below) 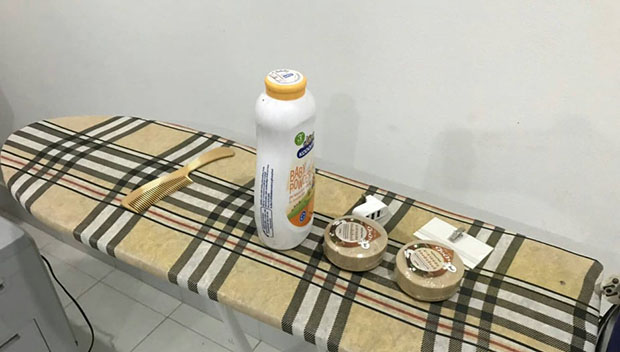 The two bars of soap and container of talcum powder found in the dead monk's sack. (Photo by Chakkrapan Natanri)

The monk was from Wat Manee Sila-art in the same village. Police were looking into why he felt the need to break into the store at 3am.

Pol Col Naris said the shop owner was initially held for intentionally causing the death of another person, although a preliminary investigation showed he had no intention to kill the monk.