Six staff members from Chevron Thailand Exploration and Production working on a platform in the Erawan offshore field helped cut a rope tied to the tail of a whale shark. (Photo from Nat Panupong Taps Facebook page)

SURAT THANI/SONGKHLA: Following an offshore drilling team's rescue of Boonrod the dog earlier this year, a drilling team working on another platform off the southern coast has saved a whale shark.

Six drilling team members from Chevron Thailand Exploration and Production in the Erawan offshore field spent about 30 minutes cutting a rope tied to the tail of a whale shark that apparently swam towards the structure seeking help.

The rope was believed to have been fastened to its tail by fishermen after the fish became trapped in a net -- but somehow the shark managed to escape, dragging the rope with it.

The rescue mission's account was posted on the Facebook account of Nat Panupong Taps, and drew widespread praise. "Thumbs up for you guys. It wasn't an easy job," one commentator wrote.

The platform is about 140 kilometres off the shore of Nakhon Si Thammarat province.

Pitak Jiaknguluem, who filmed the operation, said the mission took pace at 2pm on Saturday. All the staff members were overjoyed to save the shark, he added.

Mr Pitak said it could be the same fish seen earlier near the offshore rig before disppearing. It reappeared later with the rope around its trail, he said.

Another staff at the platform said the shark was about five metres long and weighed 200 kilogramme. The operation took around 30 minutes in rough seas before the team was finally able to cut the rope from the shark's tail, the staff added.

Whale sharks have been sighted in many areas in the Gulf of Thailand, the latest one about two weeks ago off Bang Saphan district of Prachuap Khirikhan.

The Marine and Coastal Resources Department said the sightings indicated the richness of marine resources in the gulf. 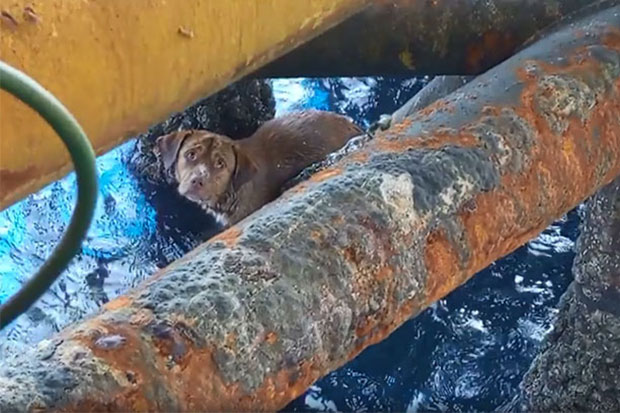 A dog, later named Boonrod, was found under an oil platform in the Gulf of Thailand in April before being rescued in April. (Photo from Vitisak Payalaw Facebook account)

In April, another drilling team from the same company rescued a stranded dog found at sea about 200 km from the Songkhla shore. The dog was later named Boonrod. The animal was adopted by a Chevron official working at the platform and he took the pet with him to his house in Khon Kaen province during his work leave.