Eyes for safety: An officer inspects areas inside the Impact Exhibition and Convention Centre in Nonthaburi as authorities prepare the venue for the three-day 35th Asean Summit, which will start this Saturday.

In 2017, South Korean President Moon Jae-in announced the "New Southern Policy", which is aimed at deepening relations with Southeast Asia to the extent that four other major powers -- the United States, China, Japan and Russia -- have done.

In his tenure, he has visited all 10 Asean member states, and last month he embarked on a week-long journey across Thailand, Myanmar and Laos.

The conclusion of his trip fulfilled his campaign promise to engage with the bloc ahead of the third Asean-ROK Commemorative Summit, which will be held in Busan on Nov 25-26 to mark the 30th anniversary of the country's dialogue and partnership with Asean, which will be followed by the inaugural Mekong-ROK Summit.

As Bangkok gears up to host the 35th Asean Summit and Related Summits, experts are encouraging Thailand, as the current chair of Asean, along with other countries along the Mekong River to engage South Korea to help in forging a sustainable water management model for the Mekong region.

To Minh Thu, the deputy director-general of the Diplomatic Academy of Vietnam's Institute of Foreign Policy and Strategic Studies, said that there is no doubt that the Mekong River is on the brink of an environmental disaster -- citing the drying-out of a lake and paddy fields in Suphan Buri's Bang Pla Ma district as an example.

Ms To attributed the drop to climate-change-induced drought, as well as the damming of the river's upper reaches. 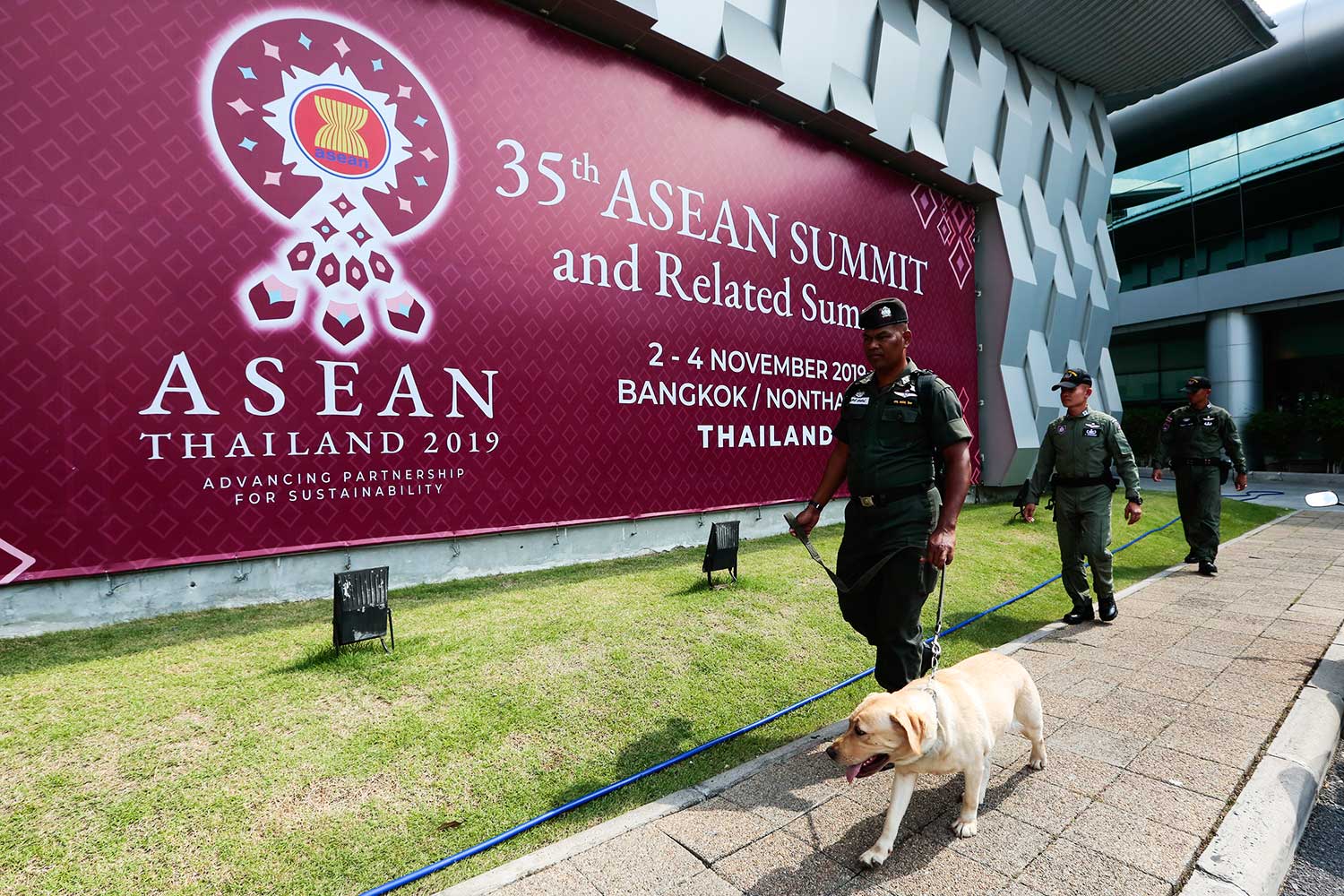 A team from the explosive ordnance disposal unit patrols as part of security measures at the Impact Exhibition and Convention Centre in Muang Thong Thani, Nonthaburi, the venue of the 35th Asean Summit from Nov 2-4. (Photos by Patipat Janthong)

"The slew of dam projects upstream has led to a shortage of water across the lower Mekong Basin," she said.

At present, Ms To said, there are 19 dams -- either completed, under construction, and/or being proposed -- in the upper reaches of the Mekong River. Six dams in China are fully operational, while Laos and and Cambodia will have a total of nine and 12 dams each, respectively.

"These dams [in the upper Mekong] are designed to hold enormous amounts of water, which explains why water levels are dropping downstream," said Ms To.

Ms To said the scale of the proposal to dam the Mekong River -- considered a lifeline of the Indo-Chinese peninsula -- poses environmental threats and social challenges to many communities along the river.

"Millions of people have to be resettled and/or forced to give up their land to make way for dams," she said. "Farmers and fishermen alike are suffering from this unsustainable model of water management."

She said that Mekong countries have developed many cooperation mechanisms, but they still face limitations -- stemming from conflicts of interest among the region's riparian states.

"Vietnam, for example, is located downstream of the Mekong, so it does not want Laos to build dams, nor does it want Thailand to use a lot of water, which they need to pursue their own development agenda," said Ms To.

The expert in non-traditional security also said that Mekong countries are trapped by the strategic competition between the United States and China.

"Beijing has poured a lot of money through the Lancang-Mekong Cooperation and the Belt and Road Initiative -- but these funds come with conditions that we have to take into account," she said.

As such, Ms To is urging Mekong countries to work together with Seoul to develop a sustainable water management strategy that takes into account the development of each countries' agricultural sector and rural development agenda.

"These are the areas which need more work -- it is important to carry out studies on the impact of keeping the Mekong's waterways open to logistics and transport, for instance," she said.

That said, Ms To added that the most important thing is to improve cooperation among countries on the Mekong Delta to promote a sustainable water management model.

"Our use of water resources are not guided by any enforceable rule, and the only mechanism available to regulate the use of Mekong's water is the MRC, whose role is limited to issuing recommendations," she said.

She proposed that South Korea, as one of the region's partners, can lead the charge towards sustainability.

"I suggest that the Mekong-Korea Business Forum be strengthened and expanded in scope so the private sector can help promote the sustainable use of the river," she said.

"They can also offer human resources training and provide scholarships. We stand to learn a lot from South Korea and their extensive know-how to help make the transition to a more sustainable model," she said.

"The first problem is finding a way to harmonise development with environmental concerns to ensure sustainability. Other problems concern conflicts of interest between upper and lower Mekong countries over the use of water resources and the growing strategic competition," said the former secretary-general of Asean-Korea Centre.

"Seoul is well-positioned to be a benign and true partner since they have no historical baggage, no territorial disputes with Mekong countries, and no hegemonic intention in this region," he said.

"The size of the fund was doubled to US$2 million (about 60.4 million baht) this year and will be increased to $3 million next year. South Korea's Official Development Assistance for Mekong countries has also been steadily increased," he said.

This year, he said, MRCF has endorsed seven projects, which include Myanmar's community forest programmes and Thailand's capacity-building projects to promote a circular economy.

Mr Kim also said that the Mekong-Korea partnership should comply with the Asean-Korea cooperation agenda and complement other cooperation mechanisms for sustainability.

"That is why South Korea made the decision to become a development partner for the Ayeyawady-Chao Phraya-Mekong Economic Cooperation Strategy (Acmecs)," he said.

"However, Mekong countries should build its own regional architecture with a unified voice, and on Asean's part, it should play a more active role in shaping policies about the Mekong."

Ukrist Pathmanand, the director of the Mekong Studies Centre at Chulalongkorn University's Institute of Asian Studies, said Thailand has not implemented enough sustainability-oriented policies in and around the Mekong region despite its position as Asean chair.

"Vietnam conducts research on the Mekong River because it lies downstream. Even South Korea is looking at how water is being managed in the Mekong River. But when it comes to Thailand, only a few universities carry out environmental studies on dam construction," he said.

"The government has not shown enough interest in the Mekong."

The director went on to lament how Acmecs -- once a promising cooperation mechanism crafted by the Thaksin Shinawatra government -- was simply left to decay as other governments decided to not pursue the initiative.

"[Acmecs] turned Thailand from an aid recipient to a donor -- it gave Thailand a new role in the Greater Mekong Subregion (GMS)," he said.

"Unfortunately, no subsequent leaders have shown any interest in developing the GMS. We attend the meetings as a partner, without ever coming up with a tangible solution. We could have shown more leadership and played a bigger role.

"For example, Thailand Incentive and Convention Association (Tica) has granted funds to students from neighbouring countries, but the scale is relatively small. We need to put in more effort," he said.

The director called on Thailand to show initiative in the Mekong region by deepening its engagement with South Korea through the Acmecs scheme and enhancing water security for neighbouring countries.

"Our government should be more proactive when it comes to Mekong River, because the river connects our mainland to the sea."