Self-exiled Cambodian opposition party founder Sam Rainsy poses prior to his departure to Bangkok on Thursday from his Paris base on Wednesday. (Reuters photo)

Wanted posters of Sam Rainsy and his colleagues have been posted at all checkpoints along the Thai-Cambodian border ahead of his planned return on Saturday.

Lt Gen Srey Doek, commander of the Cambodian Armed Forces’ Division 3, said on Tuesday the army is ready to arrest them.

“Posters of those traitors have been placed along the Cambodia-Thailand border,” Lt Gen Doek said, adding Thai soldiers have also been informed of the group’s planned arrival and that they need to be arrested to ensure the safety of Thai people. “We are ready to arrest those people.”

Phnom Penh Municipal Court in September charged Rainsy for allegedly attempting to overthrow the government. The move was made after he called on the armed forces to turn their guns against the government.

Ath Khem, chief of the Banteay Meanchey provincial police, on Tuesday said he will arrest Rainsy and his colleagues if they choose to enter Cambodia through the province.

“We are ready to arrest those people. The wanted posters are placed in all checkpoints along the Cambodia-Thai border,” Pol Maj Gen Khem said.

Maj Gen Mao Phalla, spokesman for the Cambodian Army, said Thai and Cambodian officials held a meeting about Rainsy’s arrival, but he did not disclose any information. 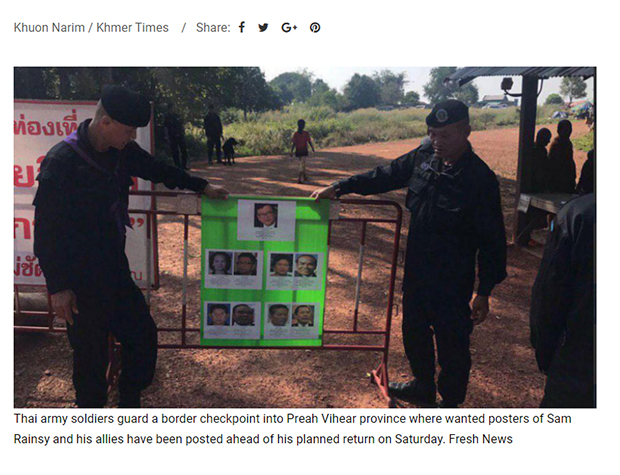 The Khmer Times website shows a picture of Thai army soldiers guarding the border checkpoint into Cambodia's Preah Vihear province where wanted posters of Sam Rainsy and his allies have been posted ahead of his planned return on Saturday.

Political analyst Lao Mong Hay said Thai authorities are looking after their people when they said Cambodian migrants will not be allowed to join Rainsy.

“The Thais have taken these measures to bar Cambodians from drawing [Thailand] into [Cambodia’s] current confrontation,” he said.

Gen Khieu Sopheak, spokesman for the Interior Ministry, said police officers will arrest anyone attempting to overthrow the government.

Defence Minister Tea Banh on Monday after leaving a National Assembly plenary session said members of the armed forces are ready to apprehend Rainsy on Saturday.

“We will on November 9 celebrate our independence from France,” Gen Tea Banh said. “The extremist group always disturbs and attempts to destroy development and peace in the Kingdom.”

“We have clear measures on how to stop the group. We are ready to arrest those people,” he added.

Deputy Transport Minister Thaworn Senneam has put the brakes on a plan to transfer four airports under the supervision of the Department of Airports (DOA) to the Airports of Thailand (AoT) Plc to manage, saying a thorough study is necessary to avoid legal problems and benefit the public.

Govt to consider joining Asia-Pacific trade pact in a month

The cabinet has agreed to set up a committee to consider whether Thailand should seek membership in an Asia-Pacific trade agreement after widespread opposition last month amid concerns joining the pact may harm the agriculture industry.

KRABI: The naked body of an unidentified foreign man with flower tattoos on his left arm was found floating in the sea near Koh Pada off the coast of Krabi province.