Three men have been arrested following a fight in the emergency room of Ang Thong Hospital in the wee hours on Sunday.

The three were being interrogated at the province's Muang police station after a brawl inside the hospital. They were among a number of people captured by security cameras in the area where the fight took place at 1am on Sunday.

Members of two gangs engaged in a fistfight at an entertainment venue in Muang district on Saturday night, ending in some being sent to the hospital. When other members of the gangs went to the hospital to visit their injured friends, another fight broke out in the emergency room. Those involved in the second brawl then escaped the compound.

Pol Lt Col Rungkiat Nathai, the chief interrogator at the police station, said the three were charged with assault and breaking into a state agency during night hours.

Police have indicated that more could be apprehended if evidence points to their wrongdoing.

Hospital director Prapas Leesutthipornchai on Monday called for legal action against the brawlers, saying the safety of medical personnel and patients had been jeopardised by the violent attacks.

A nurse posted a Facebook message under the account of Thankyou Love on Sunday showing bloodstains on the floor of the emergency room. 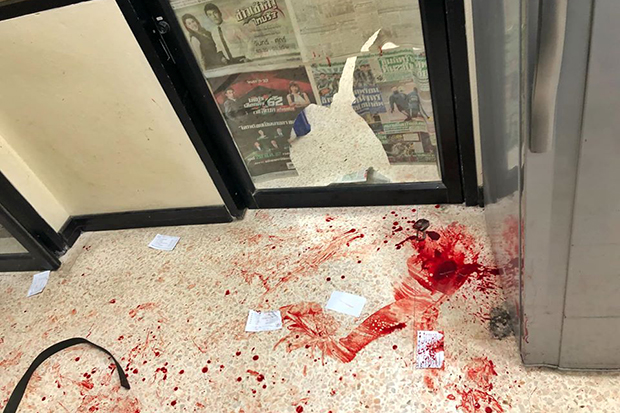 "I was one of the staff working on that shift," she said. "I was scared and shaking. We ran away to take cover," she added.

"None of our team members hurt. Now we are afraid and suspicious if we hear someone opening the doors (of the emergency room)," she went on.

"Let me repeat it. It happened in the emergency room. They didn't respect us and didn't listen to us," she wrote, referring to the fighters.

A number of brawls have taken place at hospitals in recent years. This year alone, fights broke out at Bang Saphan Hospital in Prachuap Khiri Kha and two hospitals in Nakhon Ratchasima, in Huay Thalaeng and Prathai districts.