How Catholicism took root in Thailand

The first Christian to establish diplomatic relations with Siam was Alfonso de Albuquerque, the Portuguese governor-general assigned to Asia. Portugal was at the time occupying Malacca, in modern-day Malaysia, and sent its diplomats to the Ayutthaya Kingdom during the reign of King Ramathibodi II to forge relations in 1511.

It is believed the first missionaries came to Siam to propagate Christianity and to take care of Portuguese Christians residing in Ayutthaya.

In 1662, Christianity established a firmer foothold in the kingdom with the arrival of the Paris Foreign Mission Society (MEP), led by Bishop Lambert de la Motte and tasked with establishing a native clergy. By then, the number of Portuguese missionaries in Ayutthaya had increased to 10, along with one Spanish priest, while 2,000 local people had already converted.

Two years later, the first Synod Assembly (council) for clergy in Siam was established to settle problems affecting Christians, including disputes among missionaries over who would lead the community. Christian traders began arriving in greater numbers, some with specific assignments from the Vatican.

The Synod Assembly established a local priests' council to encourage people to enter the priesthood.

The Synod meanwhile banned missionaries from engagement in politics and commerce, directed them to assimilate with the local cultural practices and also to hold their tongue on sensitive issues so as not to cause tensions.

Moreover, missionaries were instructed to teach, to uphold their own values and to translate books about Christianity into the local languages.

At the Synod assembly's direction, missionaries were also to provide free education to locals as a means of actively spreading the word of God, while teaching Latin and the Christian doctrine to the Catholic faithful.

Three hundred and fifty years later, the fruits of the first Catholic mission to Siam were on display this July in Ayutthaya, where the descendants of followers of the pioneering priests and bishops packed St Joseph's Church to celebrate the anniversary.

Speaking at the celebration service, Father Nicholas le Beau, head of the MEP, hailed the role of early Christian missionaries, including Louis Laneau who was appointed the first bishop to Siam in 1674, under Pope Clement IX. He helped take care of Annamite and Japanese Christian communities in Siam and also oversaw a Christian nursing home for the elderly.

Bishop Laneau and his missionaries were taken hostage by the Siamese during the 1688 Siamese revolution as guarantors of a retreat agreement negotiated with the French.

The bishop was freed from prison in 1691 and spent the remainder of his life in Ayutthaya until his death on March 16, 1696.

"He wrote several manifestos, ranging from how to provide moral support to prisoners to advice for care of patients with leprosy.

"His devotion impressed the king so much that he granted the bishop early release from prison," said Father Nicholas.

Father Nicholas said Bishop Laneau was well-versed in both Pali and Thai and had studied Buddhism for three years, which allowed him to understand Siamese traditions and culture.

Bishop Laneau often wrote about the Catholic community in order to explain Catholic rituals, practices and principles. He also made visits to local communities and attended to the sick.

Father Nicholas added that cultivating Christianity in 17th-century Siam was far from easy. "We needed to plough the land first, even though the rice-sowing season had not come, we needed to stay calm and wait for the ground to settle.

He noted out that the culture of the Ayutthaya kingdom allowed for religious propagation since the Siamese were a peace-loving people.

Moreover, seminaries where students were prepared for the priesthood became commonplace in the country during the reign of King Narai, attracting men from Siam, China, Vietnam and other Asian countries. 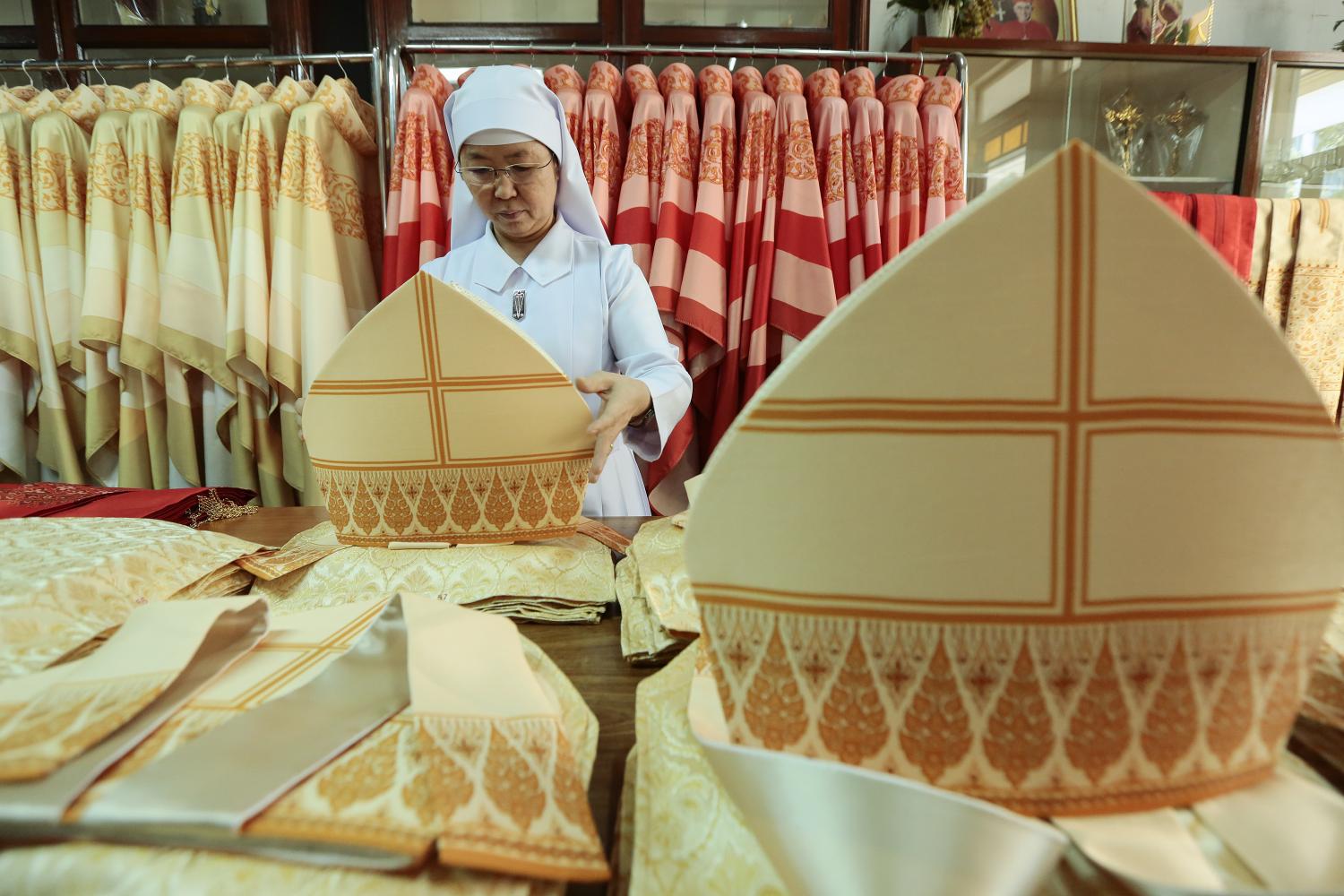 Relations between the Vatican and Thailand were first established during the reign of King Narai the Great of Ayutthaya. Diplomatic representatives and messages were exchanged between the two until the fall of the kingdom in 1767.

The relationship was re-established in 1851 when King Rama IV sent a diplomatic message to Pope Pius IX. In 1897, King Rama V became the first Thai monarch to visit the Vatican, where he had an audience with Pope Leo XIII.

The second royal visit came in 1934, when King Rama VII arrived at the Vatican for an audience with Pope Pius XI. Three decades later, in 1960, King Bhumibol Adulyadej and Queen Sirikit travelled to Rome during their Europe trip for a face to face meeting with Pope John XXIII.

In 1969, Thailand and the Vatican officially established diplomatic relations and exchanged ambassadors.

But it was not until 1983 that Pope St John Paul II appointed the first Thai cardinal, Cardinal Michael Michai Kitbunchu. In the following year, Thailand hosted its first papal visit.

At the time, Thailand was hosting large numbers of Cambodian refugees who had fled Pol Pot's genocidal regime and also the Vietnamese invasion that followed.

At least 380,000 Vietnamese, Cambodian and Laos refugees were housed in camps along Thailand's Eastern border.

John Paul II's visit helped focus global attention on the refugee crisis and also provided an opportunity for the pope to express his personal thanks to Thailand for offering the refugees asylum. 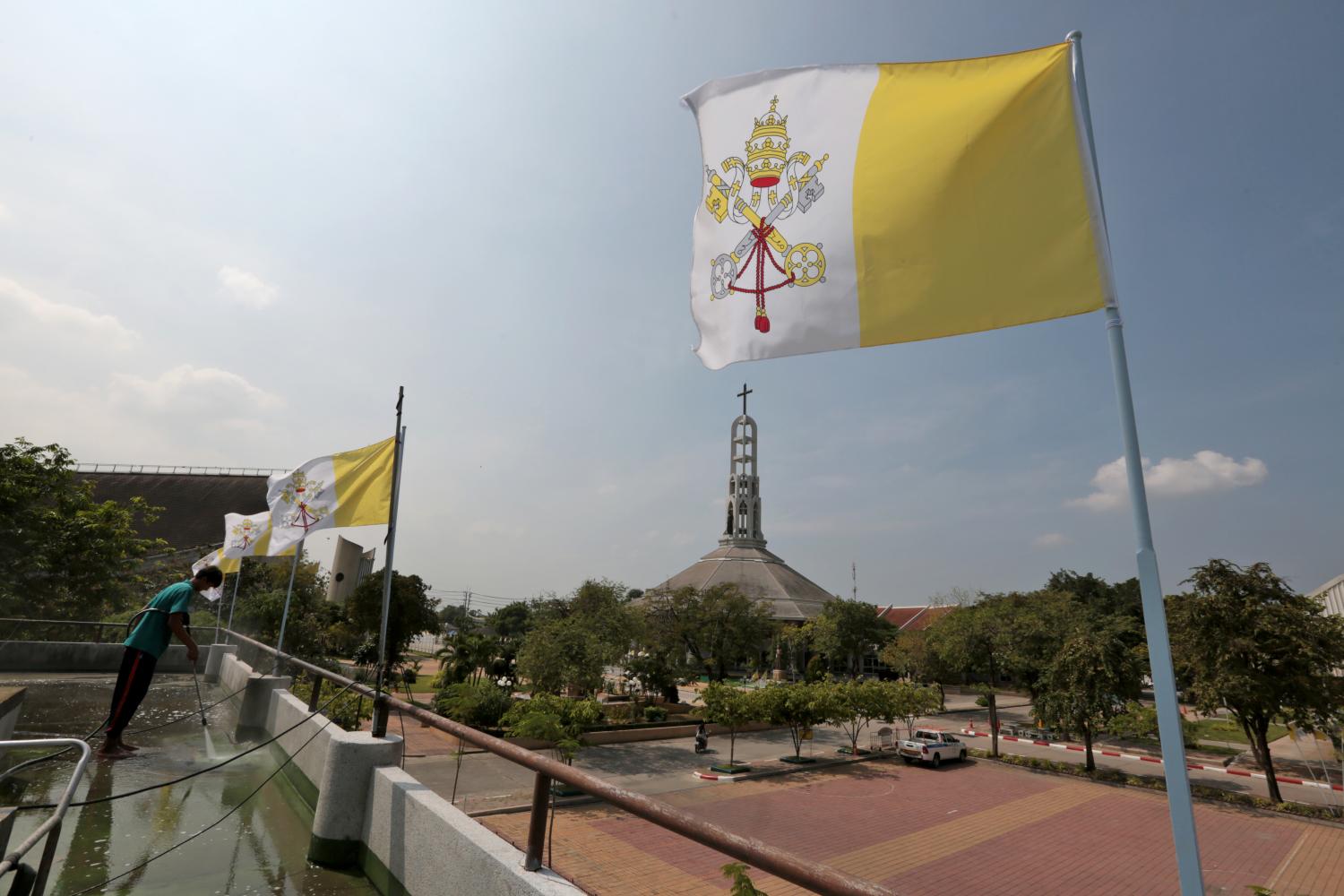 A worker cleans a deck at St Peter's School, which Pope Francis will visit on Nov 22. Chanat Katanyu

John Paul II's visit in 1984 was a great morale boost for Thai Catholics. Since then, the Thai church has grown impressively, with the most recent example being the creation in 2018 of the Chiang Rai Diocese to meet the pastoral needs of ethnic minorities in remote areas of the country's North.

This year's celebrations marking the 350th anniversary of the Vatican's Mission to Siam recalled the "happy accident" that occurred when the Holy See sent the first group of MEP missionaries to China. Due to unexpected circumstances, they ended up in Thailand, and the rest is history.

Pope Francis assigned Cardinal Fernando Filoni, the prefect of the Congregation for the Evangelisation of Peoples, to represent him at the celebrations.

"I send you my cordial best wishes an assurance of my closeness with gratitude to God for the many graces received over these 350 years," Pope Francis said in his letter.

"I pray that you may grow in holiness and continue to work in the spread of Christ's kingdom by fostering solidarity, fraternity and the desire for goodness, truth and justice in your beloved country."

Nearly 4,500 MEP priests across Asia now continue the same work as those who came before them, helping local communities in Thailand and elsewhere. However, Father Thirapol Kobvithayakul, of St Joseph's Seminary, said that more priests are needed if the religion is to survive.

Fewer ordinations are occurring these days, since it takes time and a lot of money to train a priest, he added.

As a result, the task of spreading the Catholic faith often falls to delegates of the MEP, who are finding the mission tough without the help of local priests.

"I have to extend my gratitude to Bishop Laneau and Bishop Lambert de la Motte, who laid the foundation for Christianity [in Thailand] and saw to the induction of local priests who followed in the footsteps of God," Father Thirapol said.

Representing the nuns at this year's Catholic celebration was Sister Sriprai Krathong from the Lovers of the Cross, a community of nuns dating back to the Ayutthaya period.

She said 350 years of missionary work in Siam were instrumental in setting up the nuns' order, which compromises more than 8,000 members in Laos, Cambodia, Vietnam and other nations.

The order is working to build the Christianity Propagation Home at St Joseph's Church in Ayutthaya. It's set to become a centre of Christian study and an archive of historical records for the next generation of Christians.

Putthapong Puttarnsri, a religious scholar, said much work is still left to be done on translating information about early Christian settlements in Siam.

Among about 10,000 handwritten records made by the missionaries are documents dating back to the days of King Narai. The records are a valuable source of knowledge and were written in both French and Latin.

Currently there are 388,468 Catholics in Thailand, where 662 priests oversee 526 parishes, according to the Catholic Social Communications of Thailand. Catholics comprise 0.58% of the 69-million-strong population. 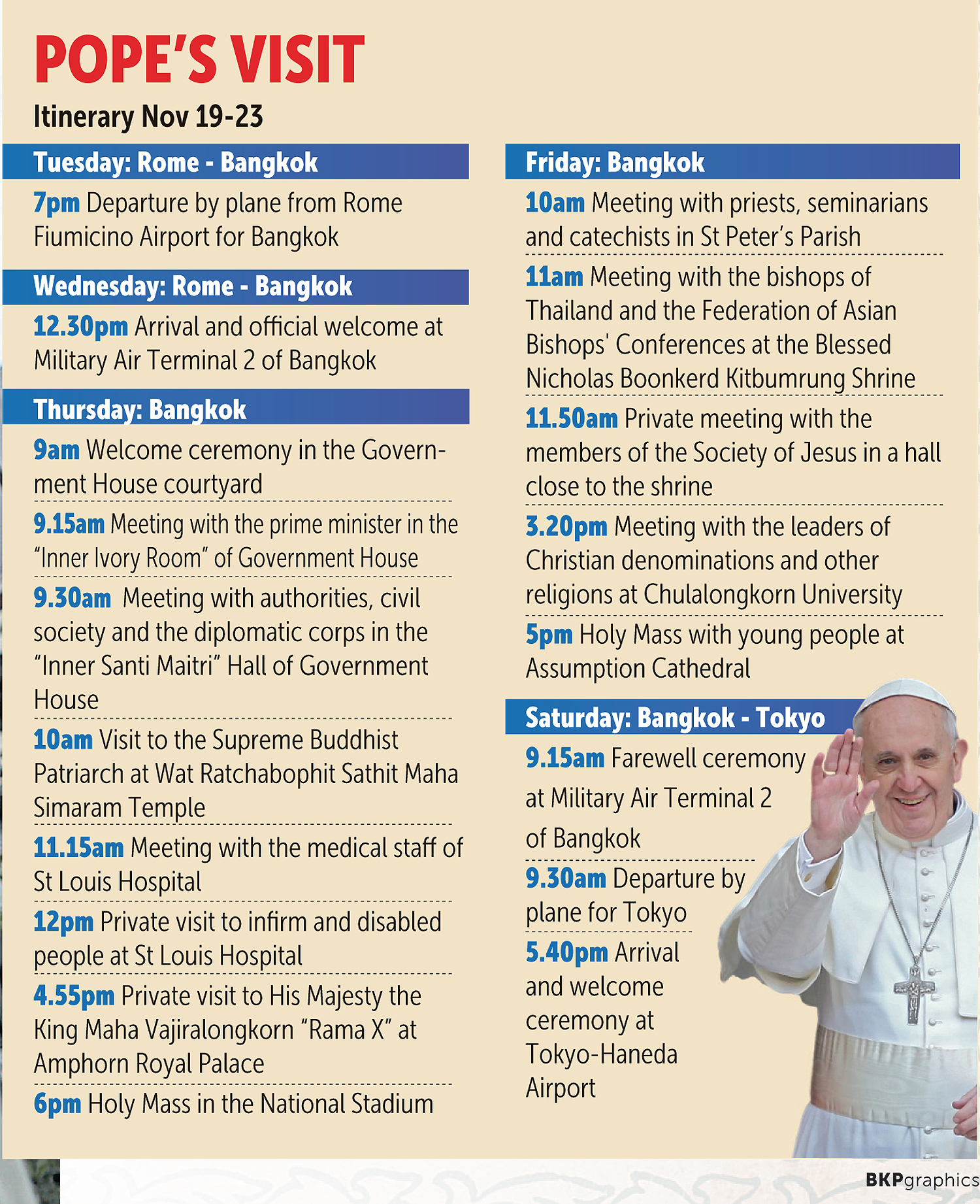 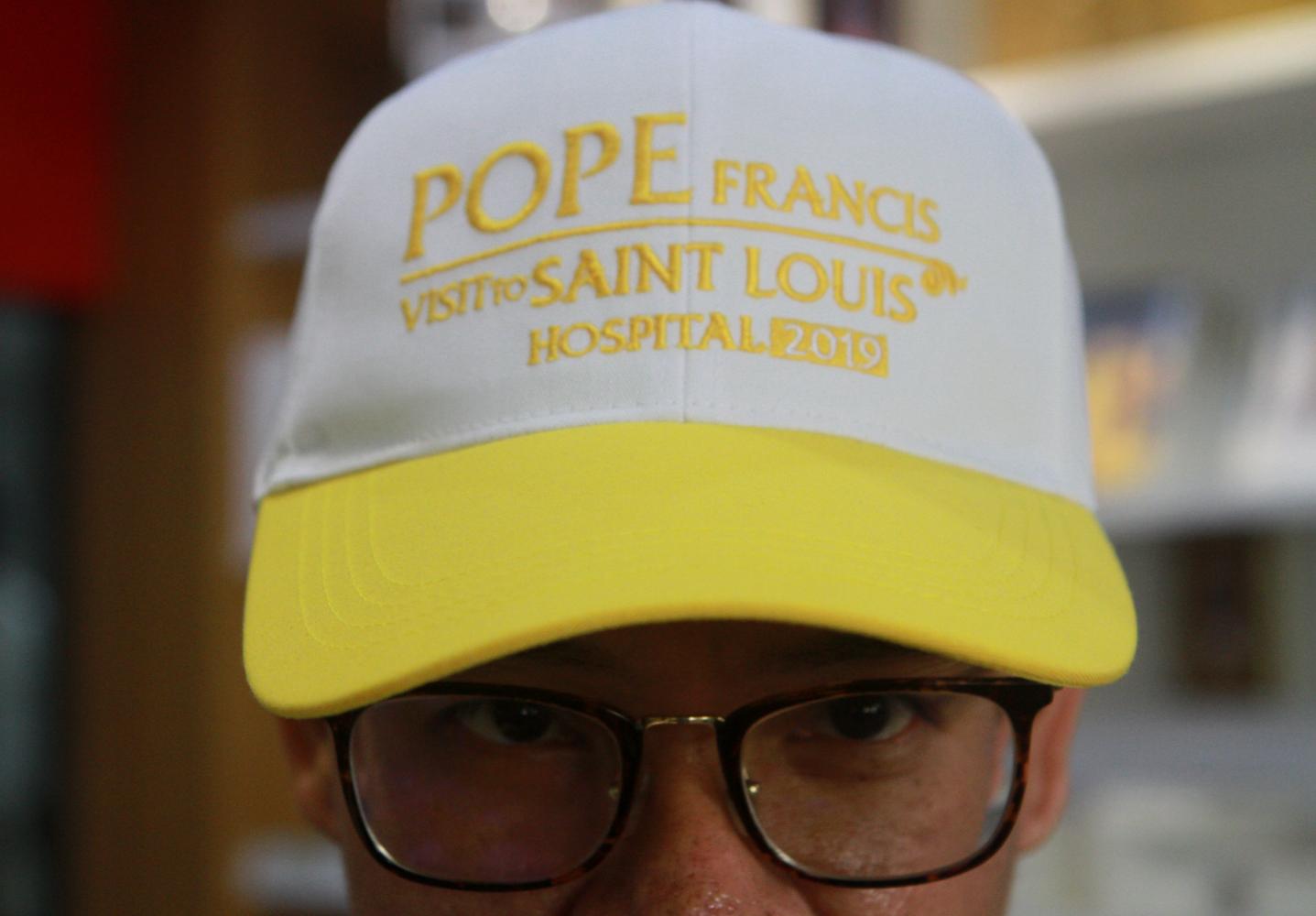 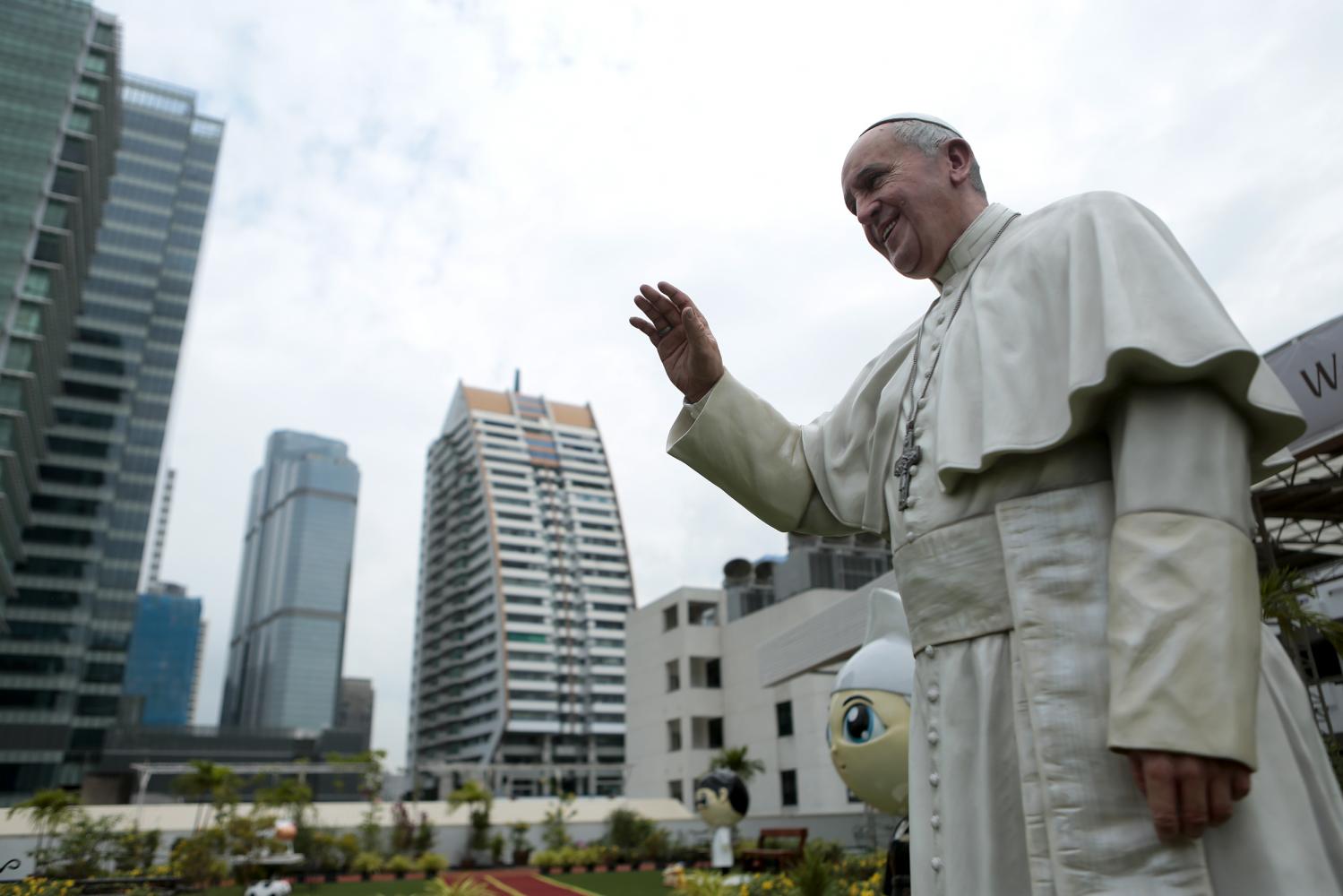 A statue of Pope Francis is erected at Saint Louis Hospital in Bangkok. Patipat Janthong