Part of the roof and ceiling collapsed at the Border Patrol Police 100th year schoool in Bo Klua district of Nan province during the earthquake on Thursday mornning. The school has been temporary closed. (Photo by Rarinthorn Petcharoen)

The 6.4-magnitude shock hit near the border in Laos just before 7am.

Residents in several provinces in the North and Northeast were woken by the earth's shaking. Tall buildings were reported seen swaying in Bangkok.

The epicentre was recorded at a depth of 3 kilometres and about 19km southeast of Nam Chang village in tambon Khunnan, Chalerm Prakiat district, in Nan province.

The Earthquake Observation Division of the Meteorological Department reported that a 4.3-magnitude quake with a depth of 5km occurred first, at 4.03am. The epicentre was in Laos.

About the same time, in bordering Nan province, cracks appeared in walls and roofs and ceilings were reported damaged in Bo Klua and Chalerm Prakiat districts.

Local leaders in the two northern border districts assessed the damage and compiled their reports.

A Border Patrol Police school roof partially collapsed in Bo Klua district. Cracks were found in walls at the front of the building and at the teachers' living quarters. Management closed the school for the day.

Cracks were also found in the wall of the ordination hall of 500-year-old Wat Phra That Khao Noi, a hilltop temple.

Phra Mahacharan Sirithammo, the abbot, said he felt the ground shaking and monks and novices fled from the buildings into the temple yard.

Broken window glass was seen at a branch of the Government Savings Bank in Tha Wang Pha district.

Col Rattana Pattanasophon, commander of the army's 32nd ranger special task force said his soldiers were assisting with the damage survey and repairs.

In Phayao, residents reported feeling both quakes this morning, but there were no early reports of damage.

In Phitsanulok province, Vorawut Niamnoi, director of Kwai Noi Barung Daen dam, said the 6.4 quake was felt in the area, but the dam appeared unscathed.

The dam was designed to withstand earthquakes of 7 on the Richter scale, he said. Even so, a thorough survey would be made of the structure.

In Khon Kaen province, surprise tremors led to patients being evacuated from Ratchaphreuk Hospital in Muang district as a precaution. They were accommodated in the parking area.

Dr Theerawat Srinakkharin, executive of the hospital, said it was the first time most people in the northeastern province had felt an earthquake. It was particularly unnerving for people in high-rise buildings.

“It was the first time a quake in Laos has been felt at Ratchaprephreuk Hospital. For the sake of safety and relief of patients, relatives and hospital staff, we decided to evacuate patients from buildings in case there were fires.:

He said the shaking was not severe.

"It was just like a fire drill. Everything went smoothly. We will move the patients back into buildings as soon as things return to normal,’’ he said.

Meteorological Department chief Somsak Khaosuwan said the main quake was preceded by 13 foreshocks, between 11.49pm on Wednesday to 6.28am on Thursday, and there were nine aftershocks, between 7.33am to 8.32am.

He said the tremors were felt in Nan, Phayao, Chiang Mai, Lamphang, Uttaradit, Lamphun, Phrae and Phitsanulok provinces. Nan was the most seriously affected.

There could be more aftershocks but they would not be severe, Mr Sommai said.

He allayed any fear of possible damage to dams,which could withstand quakes of 7.5 or more, he said. 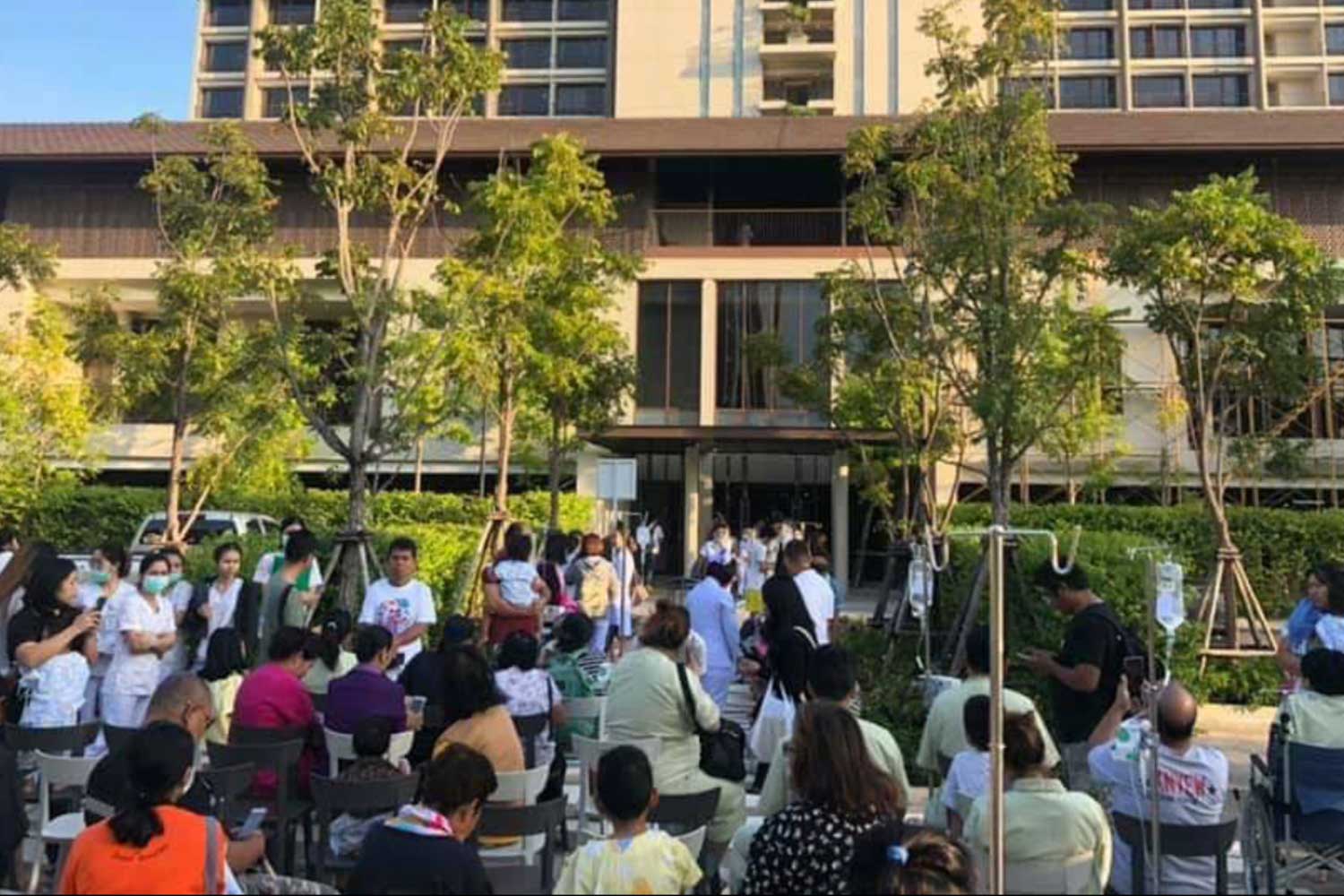 Patients evacuated from Ratchaphreuk Hospital in Muang district of Khon Kaen as a precaution after the morning's earthquake. (Photo by Chakrapan Nathanri)