Museum goes its own sweet way

Thai sweets have long held a special place in gastronomical culture and now they are honoured with a dedicated museum midway between Bangkok and the seaside district of Hua Hin in Prachuap Khiri Khan.

A girl has her photo taken with a mobile dessert display case at the Thai Sweet Museum in Samut Songkhram. Some sweets are also sold from a sweet cart. (Photo by Phitsanu Thepthong)

The desserts, or kanom, are imbued with Thai traditional beliefs, reflected in the way they are cooked, packaged and presented.

At the Thai Sweet Museum on the grounds of the King Rama II Memorial Park in Samut Songkhram's Amphawa district, visitors step back in time on a guided tour of the eye-opening history of desserts many people take for granted.

The museum, established in 2009, sits on 23 rai of land inside the park which is a stone's throw from the attraction of the Amphawa floating market.

The museum has many traditional dessert stories to tell, including those where the kanom matters more than simply satisfying the sweet tooth. They become offerings on auspicious occasions, at remembrance events and religious fairs. 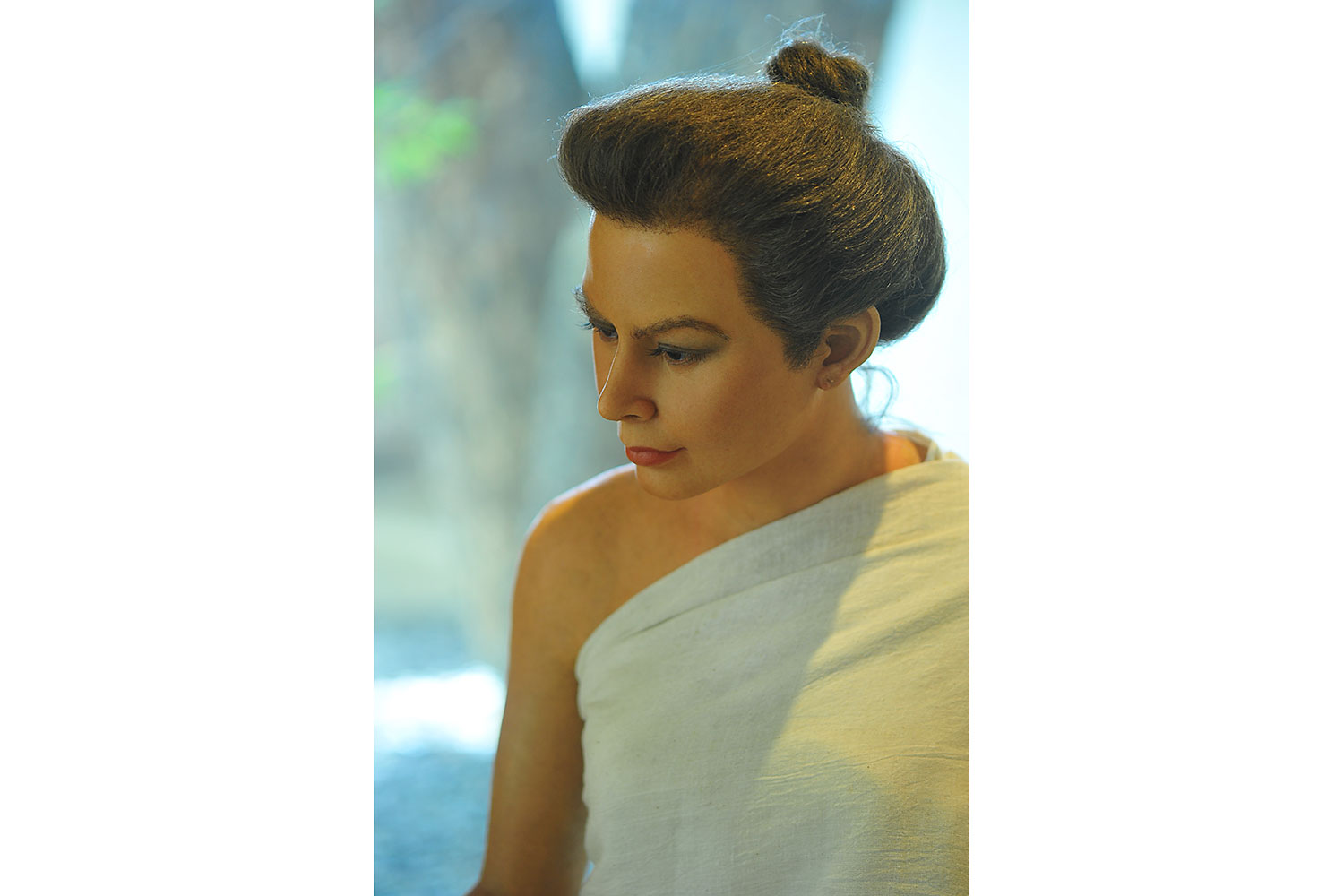 A likeness of Maria Guyomar de Pinha, head chef for desserts during the Ayutthaya period, on display at the Japanese Village Museum. (Photo by Peerawat Jariyasombat)

For most families, kanom round off the most social meal of the day -- dinner. They lend "fullness" to the meal.

The museum showcases a collection of Thai traditional sweet replicas made of plastic and resin. They are so life-like that visitors can almost feel their mouths water as they admire the exhibits which are decorated with precise details and in the colours most closely associated with real kanom.

The term kanom is thought to have been coined from the words khao (rice) and nom (sweet). Notably, many Thai desserts are made from rice flour and sugar.

Particularly striking among the displays are kanom identified with the "lucky 9" and the deep yellow colour. Nine is an auspicious number in Thai culture and the nine desserts believed to bring good luck to those who taste them include the common thong yib (pinched golden egg yolks), thong yod (sweet golden drops) and foy thong (golden threads).

Chronicled as the golden era of Thai sweets was the reign of King Narai the Great of Ayutthaya in the 17th century. At the time, the country opened up relations with European countries and with diplomacy and trade came a new way of cooking Thai desserts initiated by Maria Guyomar de Pinha, a woman of Portuguese ancestry better known by her Thai name of Thao Thong Kib Ma.

The woman was married to Constantine Phaulkon who was bestowed the noble title of Chao Phraya Wichayen. He was a Greek adventurer who became first counsellor to King Narai.

Maria Guyomar assumed her place in the royal kitchen as head chef for desserts. She mixed egg yolks and granulated sugar into local sweets and created various treats with yellowish colours which resembled gold (thong), such as thong yib, thong yod and foy thong.

Some Thai sweets incorporate a blend of ingredients which illustrate the gastronomical influence from neighbouring Southeast Asian countries and by Portugal which was a European superpower in maritime sea trade in the past. 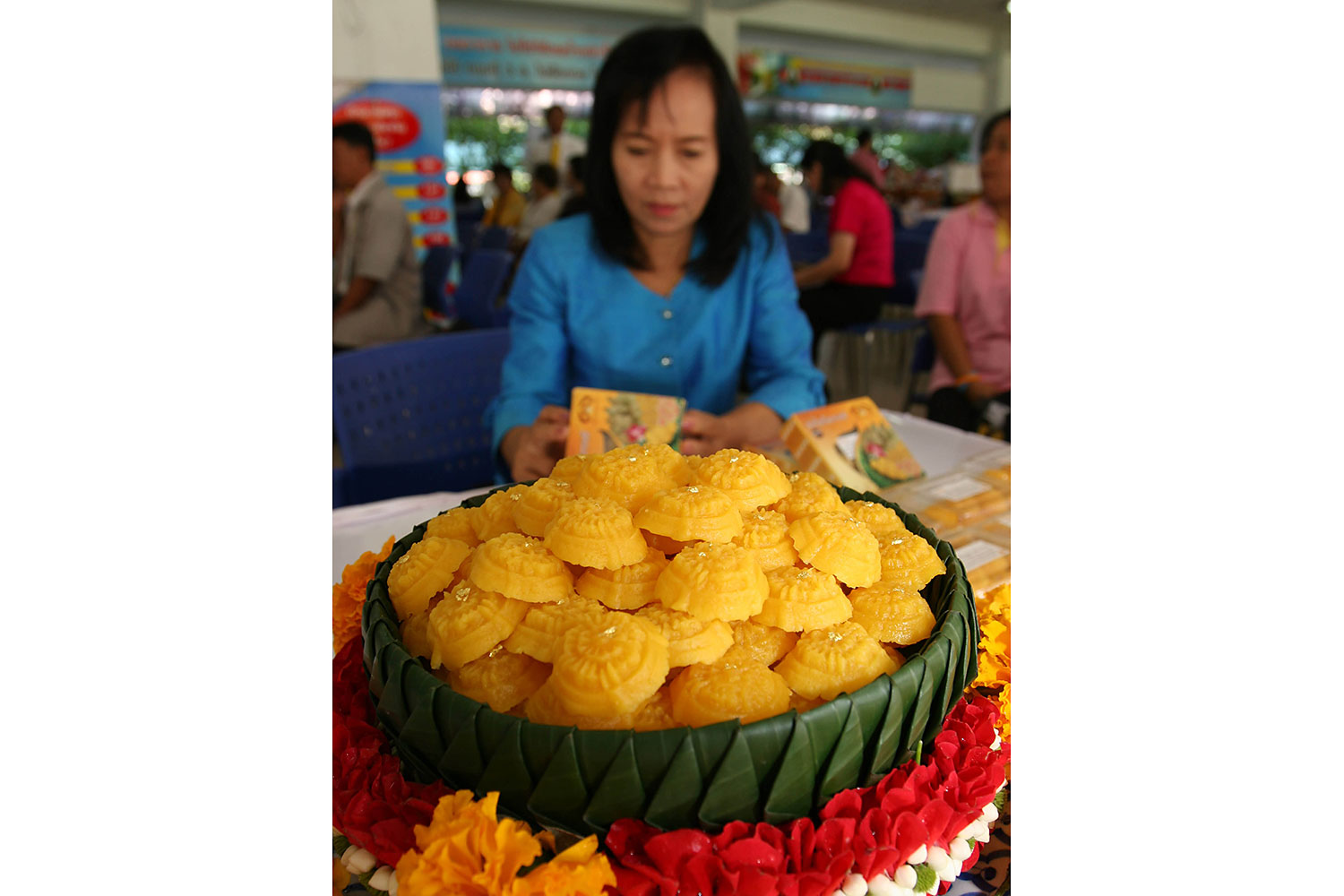 From top: A vendor sells kanom thong ek; the kanom ja mongkut, sometimes alluded to as the ‘crown jewel’ of Thai desserts; and Thai sweets are presented on an ornate plate. (Photos by Tawatchai Kemgumnerd, Anusorn Sakseree and Central Pattana)

According to the museum, Samut Songkhram is the birthplace of King Rama II.

During the reign of King Ekatat, the last monarch of the Ayutthaya Kingdom, a beautiful daughter of the wealthy Na Bangchang family of Amphawa named Nak was married to Luang Yukonbat Ratchaburi, who later became King Rama I of the present Rattanakosin era. Their first son named Chim later inherited the throne as King Rama II.

A celebration for King Rama II is organised for February with an exquisite array of meticulously-made kanom being among the highlights of the event. The sweets are placed in containers including model boats, carts, jars and pots.

"Amphawa district has abundant supplies of rice, coconuts and coconut milk, which are the basic produce for cooking many types of sweets. They lend fine quality and a sweet smell to the sweets," Ms Patcharamart said, adding palm sugar, another essential ingredient, is also imported from nearby Phetchaburi province.

The district has expansive fertile land fed by plentiful water all year round that allows for various plants necessary for cooking the sweets to be grown in large quantities.

Stepping into the museum, visitors catch the sight of pictures hung on the walls of HRH Princess Maha Chakri Sirindhorn paying a visit to the museum and presiding over the annual memorial fair to honour  King Rama II.

The museum is also home to kanom exhibits mentioned in famous literary works, the most notable of which is The Verse of Foods and Desserts by King Rama II. The works pay homage to King Rama II and the queen of the second reign with stories written about the king's favourite food and sweets.

A reference is also made of the kanom ja mongkut, sometimes alluded to as the "crown jewel" of Thai desserts for its crown-like shape. The word mongkut also literally means crown. It is one of nine auspicious Thai sweets made of egg yolks, coconut milk, sugar and flour which go through a slow cooking process until it produces a paste, which is then carved into crown shape.

"Then we have the 'quartet' of sweets presented at important ceremonies. They come attached to the long-held belief that they transfer good  luck and prosperity to those who taste them," Ms Patcharamart said.