Four Chinese men have been arrested for begging in Bangkok, with bogus stories to draw public sympathy that allowed them to earn 2,500 baht a day each.

Immigration police first caught Duan Yuanbiao, 60, following a tip-off about a man claiming to be deaf and holding a sign in Thai saying he was in dire need of money for his wife's medical treatment for leukemia.

They then arrested three other Chinese men, friends of Mr Duan, at a hotel in Hua Lamphong area, immigration chief Sompong Chingduang told reporters on Thursday. The other three Chinese beggars were Pan Wenxiang, 76, Yongmin Wei 49, and Qinyun Peng,60, he added.

All four Chinese admitted to begging, and to pretending to be deaf.

Mr Duan told police he was aware that Thais were kind and liked to make merit. So he made up a story,   that he needed money because his wife suffered with leukemia.  He typed the story in Chinese and then translated online into Thai and printed it out.

He said he used the sign to beg for money in the Sukhumvit, Phra Khanong, Khao San and Chatuchak areas, admitting he earned about 2,500 a day for 10 hours of begging, said Pol Lt Gen Sompong.

The four suspects lived in Hubei, China, and had entered Thailand repeatedly on 60-day tourist visas. When their stay expired, they would travel to Malaysia and Vietnam and beg there, before returning to Thailand, the immigration bureau chief said.

The four men were charged with begging and their visas were revoked.

The suspect was caught at a hotel in Sampanthawong area in Bangkok with stolen money in various foreign currencies worth over 10,000 baht.

The South Korean had broken into hotel rooms when the tenants went out, he said.

His visa had expired more than 3 years ago. He was charged with theft and overstaying his visa. 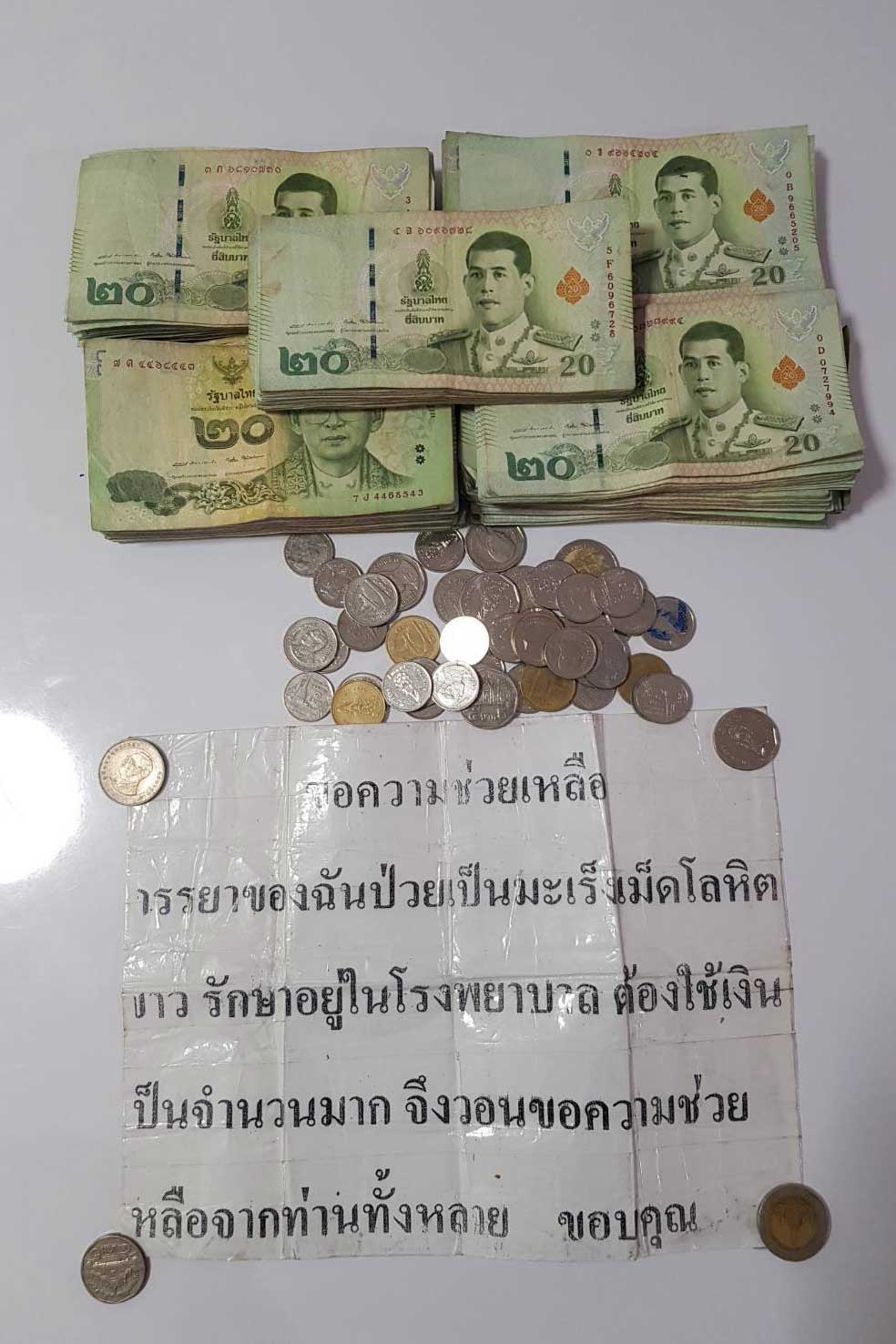 Coins and banknotes seized from one of four Chinese men caught for begging in Bangkok. The printed message reads, "Need help. My wife is suffering leukemia and now being treated at a hospital. Treatment requires a huge sum of money. I would like to appeal for your help. Thank you.''  (Photo supplied)