Red flags on Samui as wind whips up waves

Ferries still running but operators told to be cautious

Wind-driven waves rush ashore in Koh Samui, where swimmers and boaters are being warned to stay out of the water. (Photo by Supapong Chaolan)

SURAT THANI: Red flags have been raised on Koh Samui warning people not to go into the water and small boats to stay ashore due to strong winds and high waves.

Samui district chief Kittiphop Roddon said waves have been pounding the shores of the popular tourist island since Wednesday. Passenger ferry operators have also been told to take extra caution, he said after briefing Surat Thani governor Witchayut Jinto when he visited Bantai beach in tambon Mae Nam on Saturday.

Hotel operators have been instructed to raise flags to warn people not to go into the sea.

Mr Witchayut said provincial authorities had issued a warning about strong winds and waves expected from Dec 3 to 10. He has instructed the relevant agencies to be on full alert and prepare all necessary equipment.

The navy’s Second Fleet, based in Songkhla, has also been asked to dispatch the vessel Tor 111 to the Nathon pier on Koh Samui to provide assistance in case of any maritime emergency, said the governor. 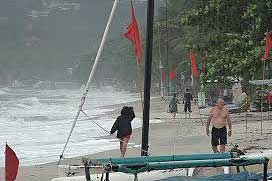 Red flags are raised on Koh Samui warning people not to go into the water. (Photo by Supapong Chaolan)