Somboon Chitmani, centre, who has been making green papaya salad in the streets of Bangkok for 36 years, in Bangkok, on Nov 19, 2019 (New York Times photo)

The coconut wood pestle hits the mortar, and the chili fumes rise in a cough-inducing haze. The lime rind bruises. Salted crab releases its funk, along with bits of claw and carapace.

Shreds of green papaya are tossed in, bathed in a blast of fermented fish paste tempered by palm sugar.

The smell is alive and dead, asphyxiating and alluring all at once. More than anything, this green papaya salad, made in a street cart by a woman who has been wielding her pestle for 31/2 decades, provides the perfume of Bangkok.

But street food vendors — with their pungent salads, oodles of noodles and coconut sweetmeats — have lately become the target of some of the capital’s planners. To them, this metropolis of 10 million residents suffers from an excess of crowds, clutter and health hazards. The floods, the heat, the stench of clogged canals and rotting fruit, the pok pok pok of that pestle — it’s all too much.

They prefer an air-conditioned Bangkok, with malls, ice-skating rinks and Instagrammable dessert cafes. They want the street food vendors gone.

And so Somboon Chitmani, who has been making green papaya salad in the streets of Bangkok for 36 years, waits. By the end of this year, she has heard, street cooks could be cleared out of central Bangkok. 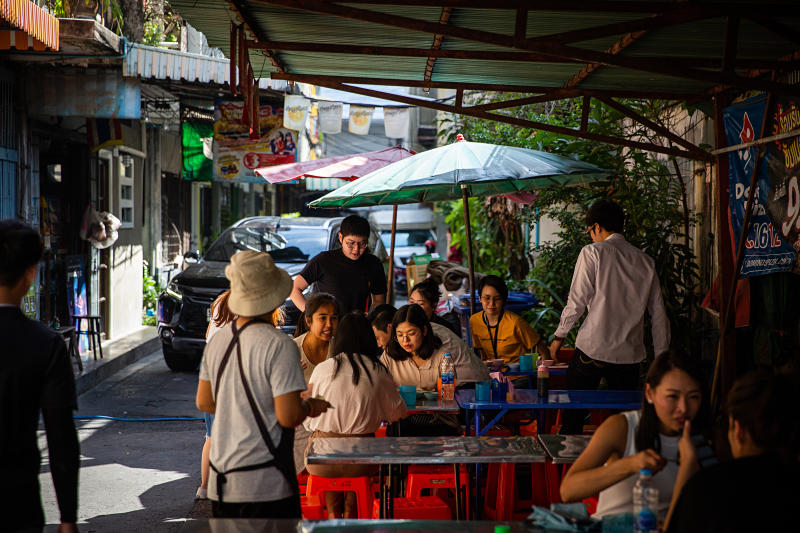 Thai office workers eat lunch at a market during at the street food market on Soi Convent in Bangkok, on Nov 19, 2019. (New York Times photo)

Already, the number of areas designated for street food has decreased from 683 three years ago to 175, according to the Network of Thai Street Vendors for Sustainable Development.

Sakoltee Phattiyakul, the deputy governor of Bangkok, dismissed fears that street food would be gone from Bangkok this year.

“No, no, no, we’re not going to ban to zero,” he said, stressing that a local government initiative to clear the city’s sidewalks of clutter was “just a plan that we have had for years.”

Others within the government bureaucracy have sent a different message, though, leaving vendors spooked. Earlier this month, the Bangkok Metropolitan Administration said the sidewalk cleanup campaign was moving ahead.

“If they want to get rid of us, we can’t do anything to protest because it’s the law,” Ms Somboon said. “But Bangkok to me is about street food. Without it, it wouldn’t feel the same.”

For some Thais, street food is about survival.

Nearly 15% of Thailand’s citizens live in Bangkok, and many cling to the fringes of one of the world’s most unequal societies. The capital’s notorious traffic forces long commutes, meaning it’s often impractical to return home to eat lunch, or even dinner until late. Besides, many people rent lodging without kitchens.

A study by the Beyond Food project, which researches the socioeconomic impact of street food in Bangkok, found that if street food consumers were forced to switch to food courts or convenience store fare, they would have to work an extra day at minimum wage to afford the increased prices.

“This is not just food for the poor, it’s food for everyone,” said Jorge Carrillo Rodriguez, a Venezuelan social anthropologist, who founded Beyond Food. “Even in Thai slums, people are incredibly picky about what they eat because they are used to a mind-blowing diversity of food.”

But even people with middle to high incomes eat an average of 8 to 10 meals per week on the road, the group’s research found.

“Hundreds of thousands of women support their households with their cooking from a cart,” he said. “Do we want to take these jobs away?” 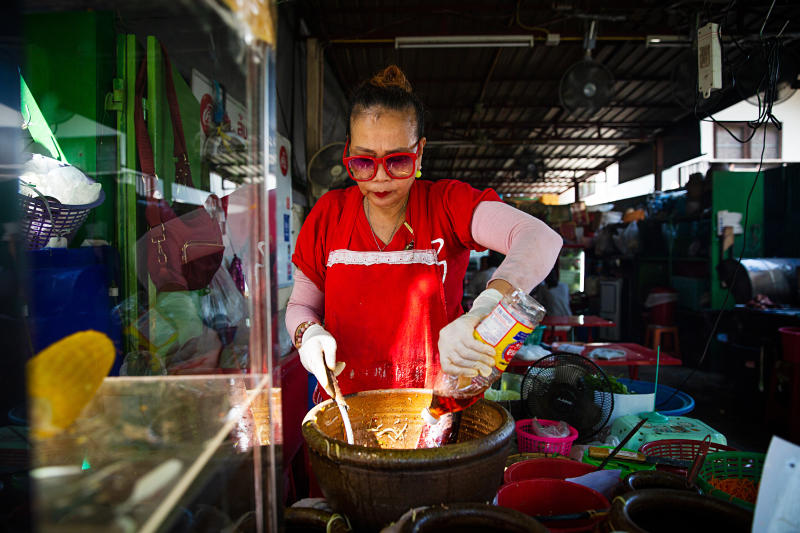 Sopa Hojkham came to Bangkok from Thailand’s northeastern heartland to work at a public relations firm. When the Asian financial crisis hit in 1997, she lost her job. So she called home and asked her mother the secret to her green papaya salad.

Each day, Ms Sopa, who wears oversized red-framed glasses to shield her eyes from chili vapours, goes through 30kg of green papaya and 60kg of chicken wings, bought at 3am at a wholesale market.

Buckets of chilies are arrayed around her — some like tiny torpedoes named in Thai after mouse droppings; gangly ones roasted a deep crimson; peppers that have a fruity finish and are known in English as birds’ eyes.

“Without spicy food, Bangkok would be too calm,” Ms Sopa said.

The value of the capital’s street food was underscored in another way when the Michelin guide began recognising street stalls alongside restaurants offering foie gras emulsions and truffle ice cream.

For three generations, a dim alley in Bangkok’s Chinatown was home to a rice porridge stand opened by an immigrant from southern China. Then, in 2017, the street stall was included in Michelin’s Bangkok edition.

Jok Prince, as the eatery is known, has since traded its spot in the alley for walls, a roof and insistent fluorescent lights. The porridge, smoky and studded with meatballs, remains the same.

With the new restaurant, “we’re safe”, said Sarunpraphut Unhawat, the granddaughter of the original porridge vendor. “But I wonder, if street food is cleared out of Bangkok, then what will be the city’s selling point?” 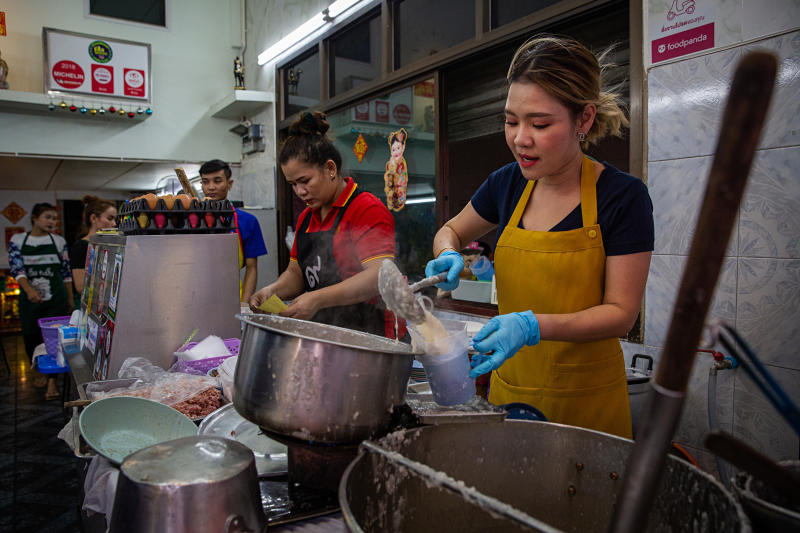 Sarunpraphut Unhawat, in the yellow apron, the granddaughter of the original owner of Jok Prince, which is now included in the Michelin guide, in the Sala Daeng neighbourhood in Bangkok, on Nov 16, 2019. (New York Times photo)

Street food is also a family business for Nitisak Trachoo, whose parents have pushed a pair of food carts across Bangkok for 27 years. Mr Nitisak, 28, once worked as a bellboy but two years ago, when his parents asked him for help, he returned to the streets.

Each day, as demure office workers and tourists in short shorts watch, he pours streams of green batter into a mould for tiny cakes fragrant with the vanilla-like juice of the pandan leaf, a common flavouring in Southeast Asia.

On a recent afternoon, steam wafted from the griddle, adding a syrupy note to the humid air.

“Being a bellboy is a lot easier,” Mr Nitisak said, mopping away sweat. “But when my parents asked me to help I came right away because it’s the Thai way.”

Across town, Ms Somboon and her husband pounded papaya and grilled fish and chicken in a barrel converted into a grill. A small, golden deity sat on a glass case filled with tomatoes, limes and gangly herbs.

A tropical tree shaded the stall. When the couple first claimed this stretch of sidewalk more than three decades ago, they planted the sapling, barely knee high. Now, pots and pans hang from its trunk, and its arc of leaves takes the edge off the heat.

The line of customers includes college students, construction workers and housewives with the chill of air-conditioning still clinging to their clothes.

Sometimes, Ms Somboon’s daughter, who works in a law firm, orders takeout from her parents’ stall. A motorcycle delivers plastic bags of their food to the building.

Ms Somboon’s son lives in Colorado. He studied computers in Illinois, and he isn’t going to sweat it out on the streets of Bangkok for a living.