This year, environmentalists and people on the streets alike were hit by news about the death of a several rare marine animals. However, their deaths were not in vain, as they galvanised the public and the government into taking action to reduce, or even ban, the use of plastic bags. Environmental conservation efforts also received a boost in the face of intense debates over the proposed ban of three toxic farming chemicals and the forest encroachment saga involving MP Pareena Kraikupt.

The high-profile death of 10-month-old female dugong Marium sparked calls for a ban on single-use plastics. Rescued in April, the juvenile dugong died in August from an infection it contracted after ingesting plastic waste. National Parks, Wildlife and Plant Conservation Department

1. Every year, marine animals regularly get washed ashore. However, this year, the discovery of Marium, a 10-month-old female dugong, saw the public and the government really come to grips with the dangers of single-use plastic bags, which often end up in animals' stomachs.

The orphaned juvenile dugong was found beached in Krabi back in April. It had become separated from its group, so rescuers sent Marium to live in Koh Libong in Trang province, known as the safest habitat for dugongs in Thailand.

However, Marium died in August. During a post-mortem examination of Marium's body, veterinarians found pieces of plastic blocking the young mammal's intestines and concluded Marium had died from septic shock. The blockage caused an infection in her stomach, which spread through her bloodstream into her lungs.

Marium was the 16th out of the 23 dugongs which died in Thailand this year, and conservationists are alarmed by the spike in recorded deaths.

Thon Thamrongnawasawat, a marine ecologist at Kasetsart University, urged the government to impose an immediate ban on single-use plastic bags which make up a large portion of plastic waste found in Thai waters.

Following Marium's death, the cabinet approved a conservation plan dubbed the "Marium Project", which was proposed by the Minister of Natural Resources and Environment, Varawut Silpa-archa. The ministry also pushed to restrict the use of plastics at shopping malls and convenience stores -- starting tomorrow, a ban on single-use plastics comes into effect.

Prior to its death, Her Royal Highness Princess Sirivannavari Nariratana Rajakanya took Marium -- as well as another dugong she named Jamil -- under her royal patronage.

Jamil, a male orphaned calf who was being treated at the ministry's marine rehabilitation centre in Phuket, died not long after Marium passed.

The record number of deaths marked an annus horribilis not only for Thailand's dugong population, but also other rare marine species.

Earlier this month, 13 turtles were found dead across the southern coastal areas in the span of just two days. Once again, garbage was blamed for their deaths.

Jumbo deaths in 'Ravine of Hell'

2. Back in October, 11 wild elephants died as they tried to cross Haew Narok Waterfall, also known as the "Ravine of Hell" in Khao Yai National Park. 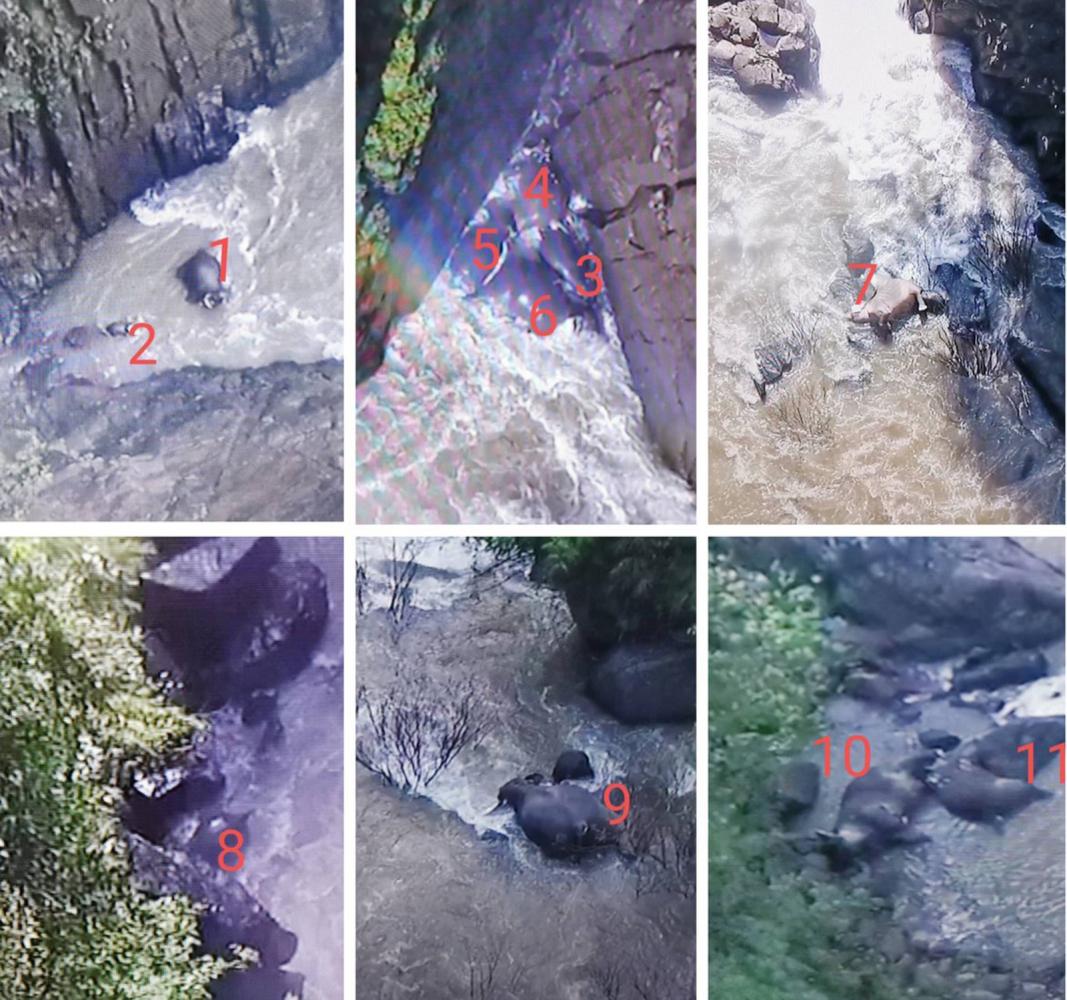 In October, eleven elephants died after falling from the top of Haew Narok waterfall in Khao Yai National Park in a big loss to the country's wild elephant population. Disaster Response Associations Thailand

The mass deaths were a tragic reminder of a similar incident in 1992, when eight wild elephants drowned as they tried to cross an overflowing river. The incident prompted park authorities to build a 100-metre concrete barrier near the site, in the hopes of preventing similar accidents.

However, the deaths were more than just a tragic accident for wildlife conservationists. They ignited fear among local villagers, who were concerned the decomposing carcasses would contaminate a nearby water reservoir that they rely on every day.

Animal conservation groups blamed the Department of National Parks, Wildlife and Plant Conservation, saying mismanagement of the site lead to the accident.

They said the department had set up a tourist service area right on the wild elephants' trail, forcing them to make a detour through unfamiliar terrain and causing them to fall into the ravine.

A number of activists even went on a hunger strike, demanding the department come up with a better forest management plan.

Mekong River and the sediment hunger

3. Crystal-clear water along the Mekong River might sound appealing to some -- but definitely not to the experts. 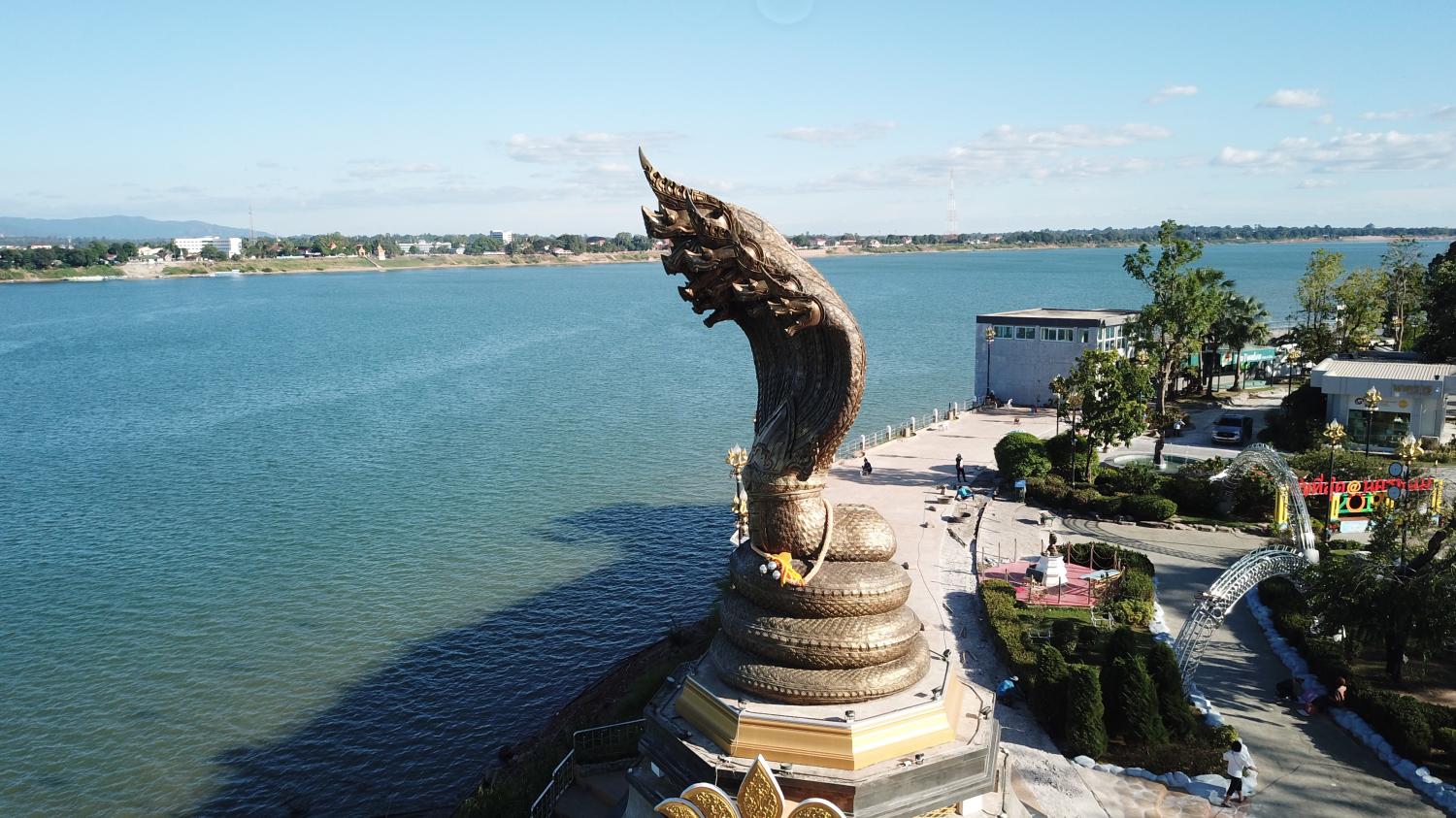 This photograph taken in early December shows a stretch of the Mekong River in Nakhon Phanom. The river's reddish-brown hue turned bright blue in some parts as the result of a marked loss of suspended sediments in its current.  Pattanapong Sripiachai

Last month, stretches of the mighty river turned blue in an ominous warning to ecologists.

Usually, water in the river has a brownish hue due to the mud and nutrient-rich silt the river collecta as it winds downstream. Clear water, experts said, means less of nutrients for feeding fish and enriching the soil on farmlands along the river.

Ecologists and NGOs described this phenomena as "sediment hunger" and blamed dams built on the Mekong River's upper reaches for disrupting the flow of sediments to feeding fertile areas downstream.

Over the past decade, China has built a number of dams along the river, and some new dams are in the pipeline. The project that has affected Thailand the most is the Xayaburi dam, a 1,285-megawatt hydroelectric dam in Laos, built by CK Power.

Tug of war over toxic trio

4. The unsettled issue of the ban on three toxic farming chemicals stems from what has been described as a policy rift within the coalition government. 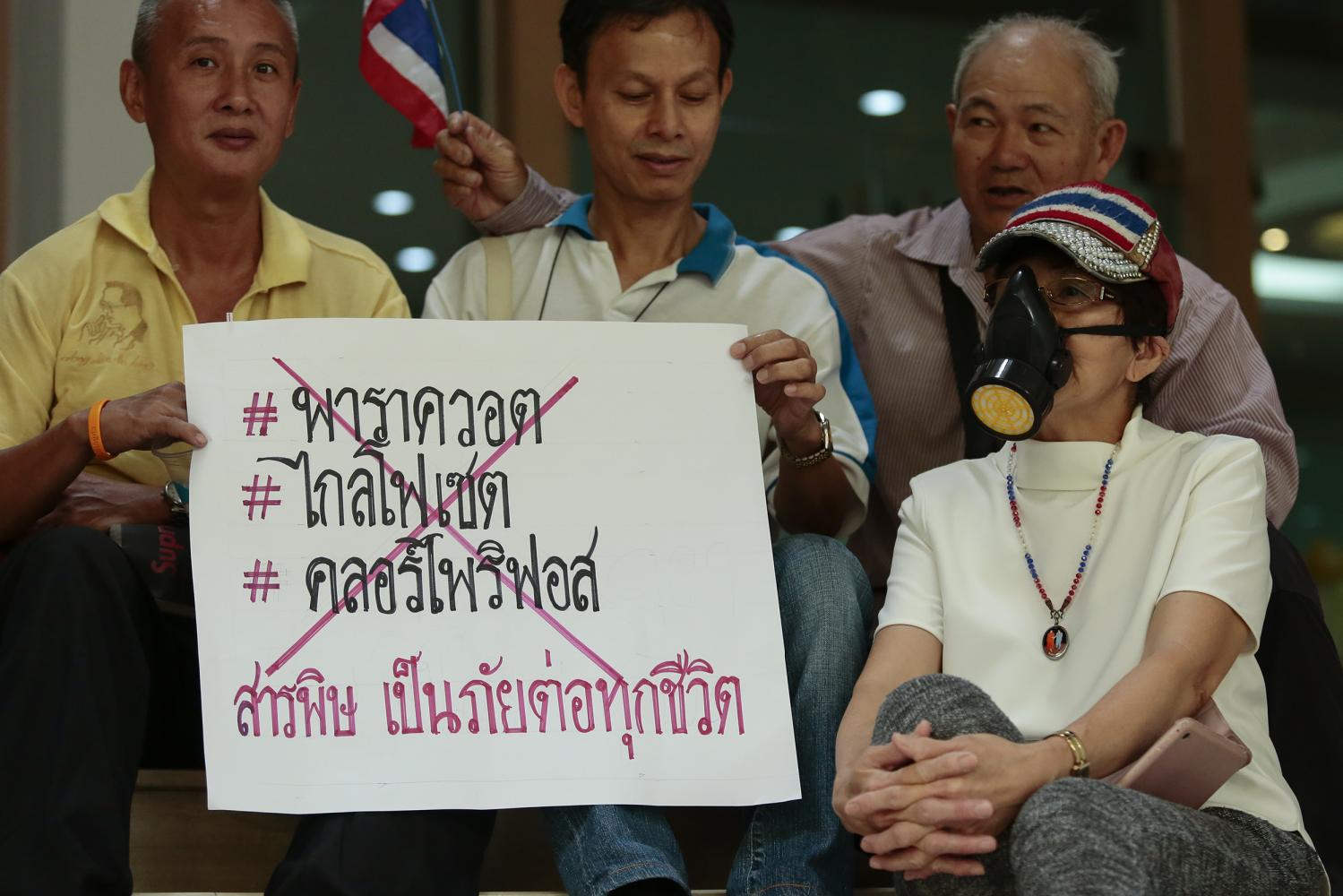 Proponents of the toxic farm chemicals ban gather at the Industry Ministry in October. Patipat Janthong

Disunity among cabinet ministers on the matter became apparent late last month, when the newly-appointed National Committee on Hazardous Substances (NCHS), headed by Industry Minister Suriya Jungrungreangkit of the ruling Palang Pracharath Party, revised a decision it made in October to ban the use of paraquat, glyphosate and chlorpyrifos -- three toxic farm chemicals which are still commonly used in Thailand.

Instead of stopping the use and import of all three chemicals starting from Dec 1 as per its initial decision, the NCHS decided to postpone the ban for another six months and removed the insecticide chlorpyrifos from the ban list.

Mr Suriya reasoned that banning the use of the chemicals on Dec 1 would incur huge financial costs for the government, which would have been forced to compensate affected parties, as it would have raised the cost of planting and harvesting.

It would also disrupt food distribution chains, he said, as manufacturers would be banned from importing raw materials -- such as soybean or maize -- from countries where those chemicals are still used.

The delay was regarded as an insult to the Bhumjaithai Party, a coalition partner which has been trumpeting for an outright ban on the chemicals.

Deputy Agricultural Minister Mananya Thaiset, of the Bhumjaithai Party, is a strong advocate of the ban, while Deputy Prime Minister and Bhumjaithai chief Anutin Charnvirakul threw his unreserved support behind the activists and health experts who are pushing for a complete ban of the three chemicals.

5. Asset declarations can be the end of politicians and/or public officials whose wealth were acquired through shady means, and Ratchaburi MP from the ruling PPRP-lead coalition, Pareena Kraikupt, became its latest casualty. 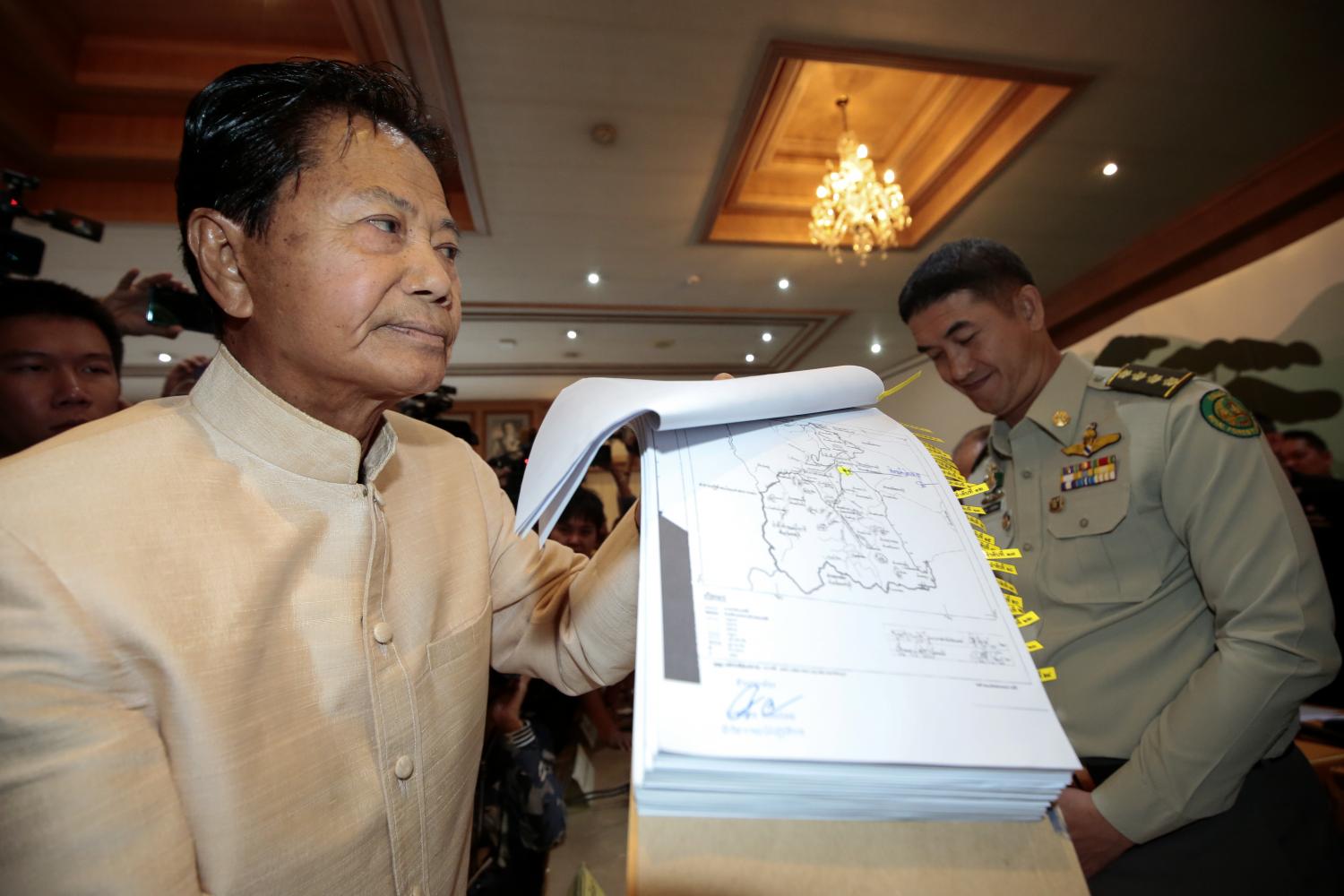 The MP came under fire after her mandatory asset declaration to the National Anti-Corruption Commission (NACC) revealed that she owns 1,700 rai of land in her native Ratchaburi.

Investigations have found that 682 rai of land under her name were actually Sor Por Kor plots -- land strictly reserved for farming by poor landless farmers.

While she used the land in question to farm chickens, critics insisted she does not tick any eligibility criteria.

Ms Pareena also reportedly owns a 46-rai tract of land in the province, which the Royal Forestry Department has established to be a part of a forest reserve.

The RFD has filed a police complaint against her for encroachment. If found guilty, Ms Pareena faces a jail term of up to 20 years and/or a find of 2 million baht.

The case has since snowballed after anti-corruption activists petitioned the NACC to probe 12 other people for similar offences. Among them are MPs from Pheu Thai, PPRP, Bhumjaithai, and Future Forward parties, as well as senators and senior public officials.

MOSCOW: Russian opposition politician Alexei Navalny said on Friday that he would begin gradually ending a hunger strike that supporters said had placed him at serious risk of death.