The former immigration police chief on Wednesday linked the gunshots fired into his car on Monday to his opposition to a 2 billion baht contract for biometrics equipment to screen passengers at major airports.

The former flamboyant police officer, better known as Big Joke, told reporters that he viewed his attempt to block the project as the only possible motive for the attack on his SUV on Monday night.

Sittra Biabangkerd, an independent lawyer, has asked the National Anti-Corruption Commission to look into the project.

A gunman fired eight shots into the passenger-side doors of the Lexus SUV that Pol Lt Gen Surachate drove and left parked in a soi outside a massage parlour in Bang Rak district on Monday night. Police recovered two bullets for forensic examination, and believed the rest were in the vehicle.

His career path soared, overshadowing more senior officers, when Deputy Prime Minister Prawit Wongsuwon was in charge of police affairs during the junta regime from 2014-2019. 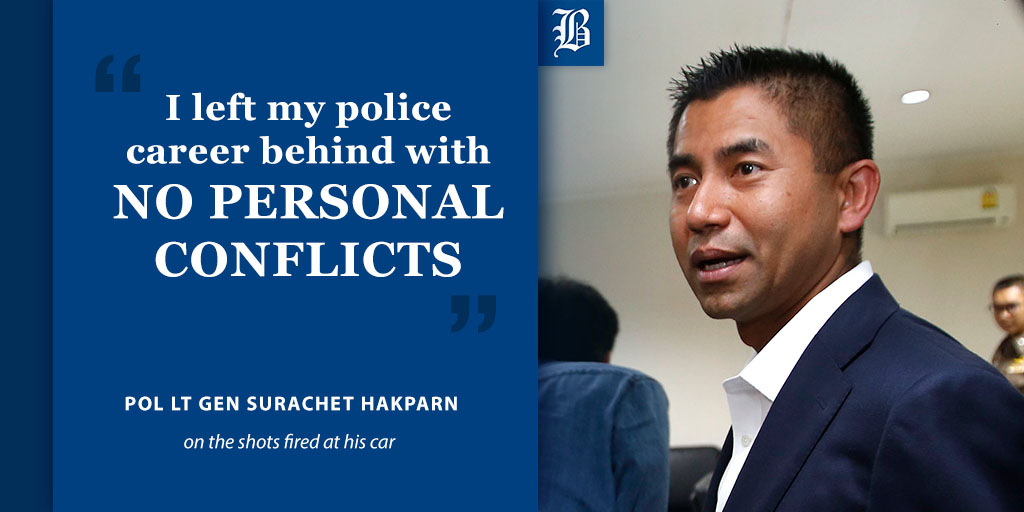 At Bang Rak police station, he said Pol Gen Chakthip should accept responsibility if police could not find the men who shot at his car. The case was in its third day, but police said they still had no leads on finding  those responsible, he added.

Metropolitan Police Bureau chief Pol Lt Gen Pakkapong Pongpetra said the placement of the bullet holes  showed that the attackers intended to threaten Big Joke, not to kill him.

Lawyer Sittra posted a Facebook message on Tuesday saying the shooting was linked to the NACC's intention to call Pol Lt Gen Surachate in to provide more information about the biometrics project, as part  of the graft investigation.