With the threat of rising sea levels causing further issues with salinity in raw water for tap water production, the Metropolitan Waterworks Authority (MWA) is looking into the possibility of moving its water pumping station from Pathum Thani's Samlae district, which is around 96 kilometres from the mouth of the Chao Phraya River in Samut Prakan province, to an area near Ayutthaya's Bang Sai Arts and Crafts Centre, 22 kilometres further inland.

"We have long been aware of the problems facing tap water processing security and have prepared plans to make sure that water consumption remains secure despite the threat posed by climate change," said Raksak Suriyaharn, the MWA's deputy governor for water production and transmission, adding that moving the water pumping station to a higher location would help mitigate against the rising sea level and saltwater intrusion into the raw water supply.

The Samlae water pumping station contributes 75% of the tap water for Pathum Thani, Nonthaburi, Bangkok and Samut Prakan provinces. Relocating to Bang Sai would cost more than 1 billion baht, according to the plan.

Mr Raksak said there are many challenging factors to consider, especially considering the large amount of investment needed to complete the move and the additional pipes required to link the new facility to the rest of the network.

He also stressed the need to consult with the local community in Bang Sai who will be affected by the construction work, not to mention the process of land expropriation that would also have to be undertaken.

"We need to take 4 million cubic metres out of the river daily for making tap water. This is a huge undertaking and will require consultation with people living in the area. However, we have considered a number of locations and Bang Sai is the most logical option to pursue," he added. 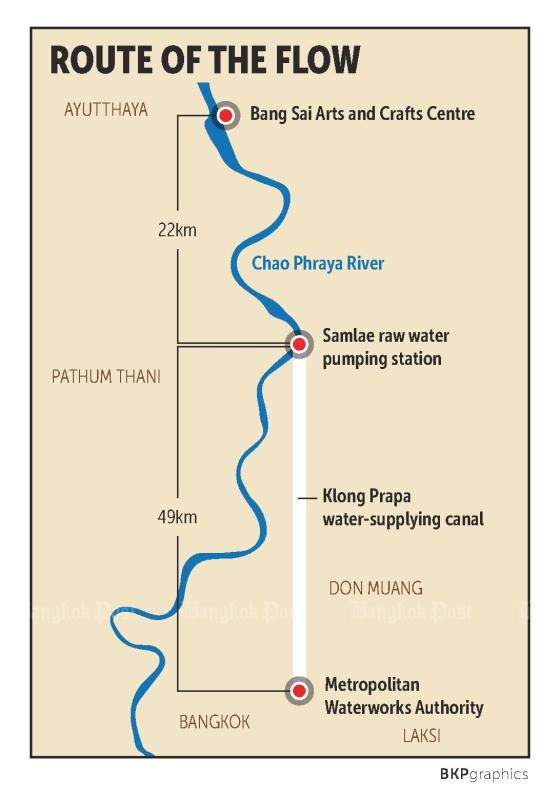 The MWA has recently been on high alert because of the salty raw water entering its largest water pumping station in Samlae. Levels of salinity in the raw water supply have reached 0.52 grammes per litre since the New Year, which is more than double the World Health Organisation's recommended level of 0.25.

"When raw water is that salty, production has to be suspended temporarily," said Mr Raksak.

He forecasts the situation is only going to get worse this year due to severe drought hitting the country. The four main dams in the central region are already down to 28% capacity, he said.

According to Mr Raksak, the MWA plans to expand tap water production at its Mahasawat station in Nonthaburi province by 800,000 cubic metres per day to 2.4 million cubic metres over the next few years.

Additionally, the MWA has started improving the network that allows raw water to be piped into the central network from sources in the West under a budget of 40 billion baht. The expansion is scheduled to be complete in 2024.

"The idea behind this project is to improve water-consumption security by taking more raw water from the Mae Klong River in the West that does not suffer from significant levels of salinity," said Mr Raksak.

The MWA has studied the possibility of using osmosis systems to filter out the excess salt, but means using 30% more water, which could increase the cost of production from 8 baht per cubic metre to 50, he said. Even then, the main byproduct of the process would be saltwater which would be a challenge for the MWA to deal with in an environmentally safe way.

However, Seree Supratid, director of Climate Change and Disaster Centre, Rangsit University, disagrees with the plans.

He said the Chao Phraya Delta is a highly sensitive area and the rising sea level coupled with land subsidence of 1.6 centimetres per year in the capital will see 3 to 4 kilometres of land on the coast submerged in the next 10 years.

Therefore, he argues that simply moving the pumping station a little further upriver is merely delaying the inevitable and won't rectify the salinity problem, either.

Instead, he suggested investment needs to be made into finding technological solutions that can prevent seawater entering into the capital's raw water stores.

If no measures are taken, the very heart of the nation's economy -- its rice farms -- could well face a crisis due a lack of freshwater for the crops, Mr Seree warned.