Officials in charge of the Nong Khaem Solid Waste Disposal Centre face criminal charges for allowing trucks from outside of Bangkok to dump waste at the site. (Photo by Pattarapong Chatpattarasill)

The Bangkok Metropolitan Administration (BMA) on Friday filed criminal charges against its own waste management officials for letting garbage trucks from a neighbouring province dump waste at a city dump site.

The illegal activities have been going on for five years and were costing the city around 40 million baht a year, authorities said.

Chatri Watthanakhechon, head of the BMA’s Environment Office, filed illegal waste smuggling complaints with the Crime Suppression Division (CSD) against the head of the Nong Khaem Solid Waste Disposal Centre and other individuals.

They are accused of violating Article 157 of the Criminal Code that deals with malfeasance by state officials. If found guilty the accused face between one and 10 years imprisonment and/or a fine of between 20,000 and 200,000 baht.

The charges came after Bangkok Governor Aswin Kwanmuang on Thursday evening led a team of officials to intercept garbage trucks from Samut Sakhon sneaking into the disposal centre in Nong Khaem district.

Nine garbage trucks belonging to the Suan Luang and Tha Mai tambon administrations in the neighbouring province were impounded. 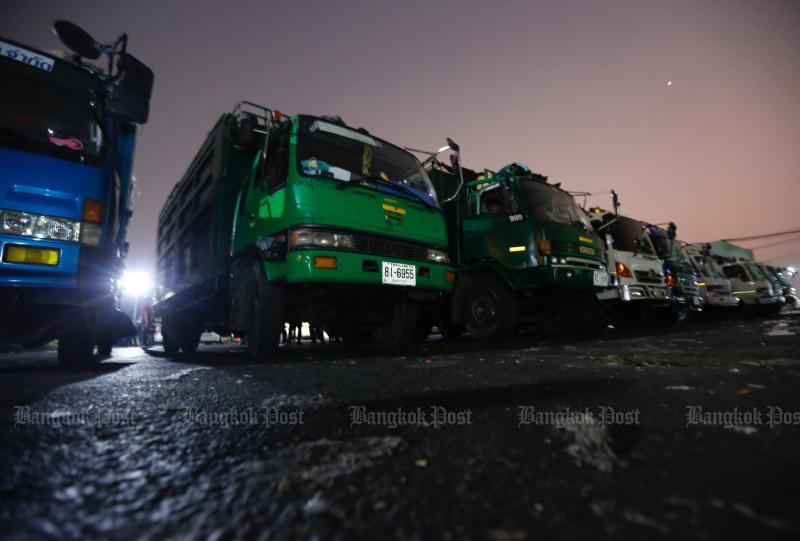 Trucks from Samut Sakhon are impounded after raid at the Nong Khaem dump on Thursday. (Photo by Pattarapong Chatpattarasill)

The BMA said 30 trucks from the two tambons had been dumping waste at the facility on a regular basis for almost five years, resulting in estimated annual damages of 40 million baht for the city.

One of the accused garbage truck drivers reportedly admitted he and other drivers had been dumping garbage at Nong Khaem every day at 5pm.

“When I reached the centre, I only found a security guard at the gate, who waved us through,” he was quoted as telling a BMA official.

Mr Chatri said at the CSD that City Hall would also set up a a panel to seriously punish any of its officials found involved in the case.

The Nong Khaem site handles 3,500 tonnes of waste a day and has an annual operating budget of 2 billion baht. City Hall commissions a private company to transport the waste from the disposal centre to be buried in the ground at a landfill site, paying it 680 baht per tonne out of that budget.

The BMA began to suspect something was fishy after the officials operating the site in Nong Khaem requested an additional budget of about 100,000 baht a day to handle more garbage. 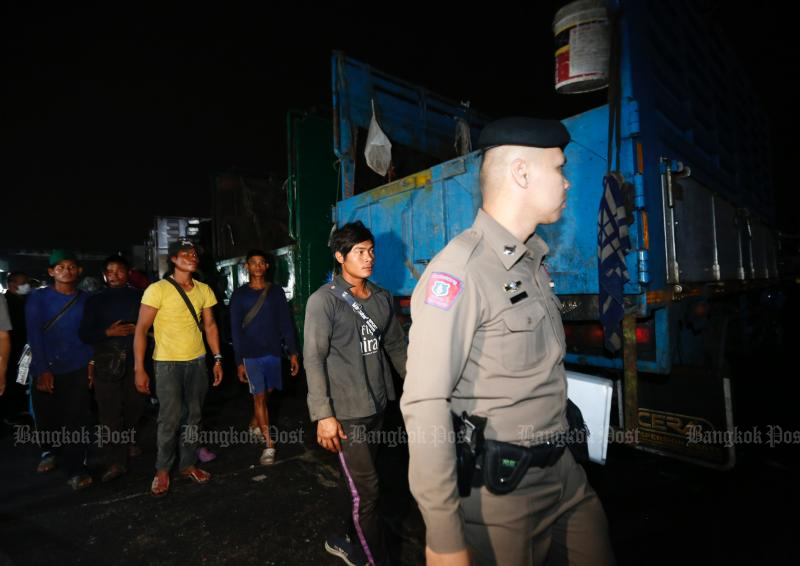 Police arrest lorry drivers and fine them on Thursday for dumping waste from outside the capital in Nong Khaem. (Photo by Pattarapong Chatpattarasill)

City Hall officials and police secretly checked the garbage trucks coming in and out of the site for a week before deciding to stage a raid and impound the non-Bangkok trucks on Thursday.

Mr Chatri did not rule out the involvement of the private company contracted to take the garbage from the Nong Khaem centre, saying that would be for the CSD to investigate.

The name of the company was not disclosed.

Some of the waste from Nong Khaem is burned but the majority is transported to be buried in Kamphaeng Saen district in Nakhon Pathom.

BEIJING - Uyghurs have urged UN human rights chief Michelle Bachelet to avoid falling victim to a public relations stunt as her trip to China enters a delicate new phase on Tuesday with a visit to the remote Xinjiang region.

Hundreds of critically endangered baby giant turtles were released into the Mekong River in Cambodia to mark World Turtle Day on Monday.

The bodies of 14 people have been found washed up on a beach in Myanmar, an official told AFP on Monday, with a local rescue group saying some were Rohingya attempting to reach Malaysia.