The Ministry of Public Health has implemented the highest level of precautionary measures at airports and hospitals across the country to minimise the possibility of a disease outbreak in response to the surge in Chinese tourists expected to arrive to celebrate Chinese New Year. 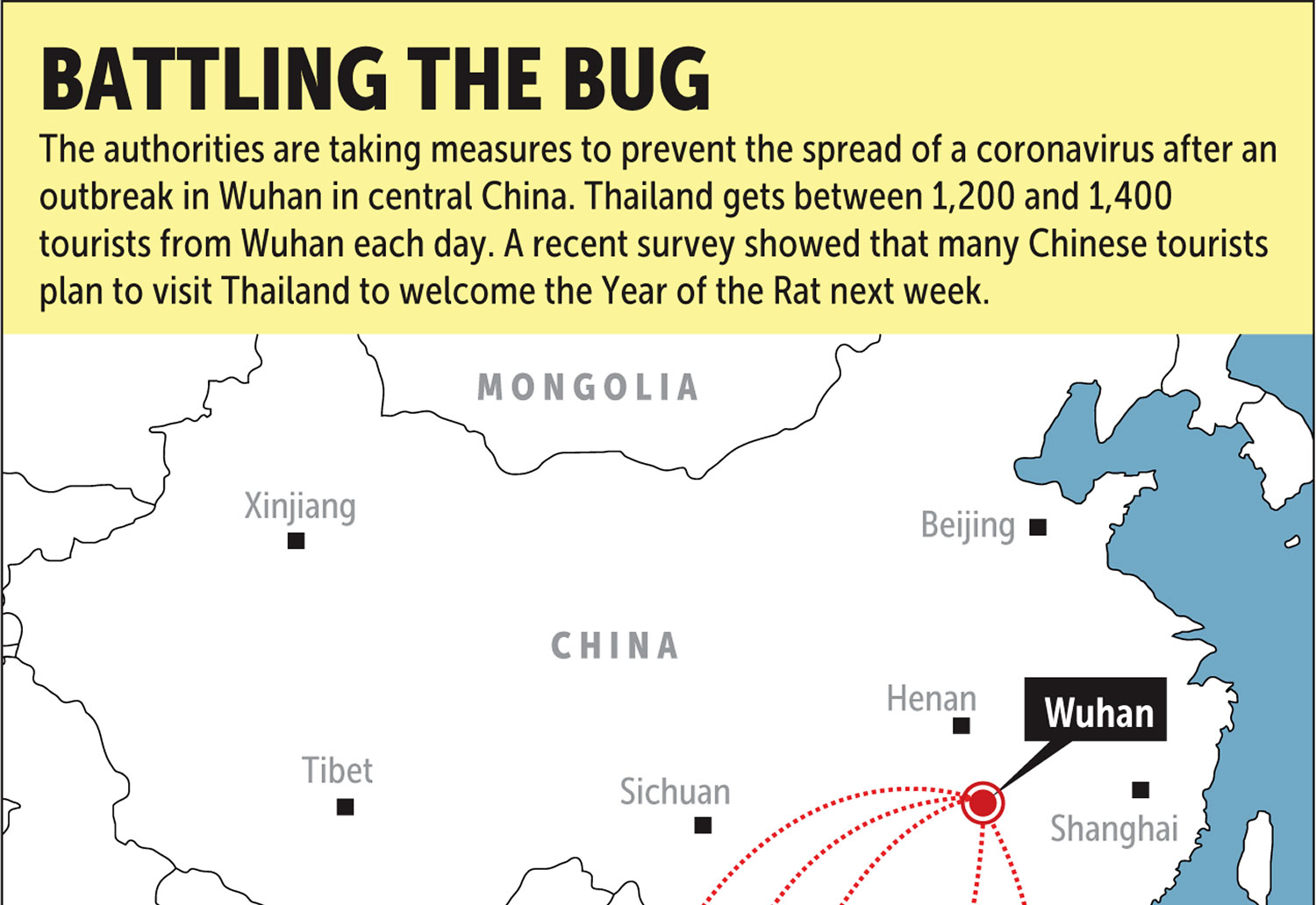 Meanwhile, the country's second case of a Chinese national infected with Novel Coronavirus 2019 was confirmed by on Thursday night while lab results for a Thai suspected of being infected are pending.

Speaking at a press conference, the ministry's permanent secretary, Dr Sukhum Kanchanapimai said public health authority teams have been set up to monitor inbound tourists at Suvarnabhumi, Don Mueang, Chiang Mai, Phuket and Krabi airports, which have direct flights arriving from China. Moreover, both state-owned and private hospitals are on alert to deal with the disease as medical treatment guidelines have been provided by the ministry and a patient-transfer system also arranged. A channel to report the disease if found among suspected sufferers has also been set up and linked to the ministry.

The country confirmed that the first case of Novel Coronavirus 2019 was found on Jan 13 in a 74-year-old Chinese woman from Wuhan. Presently, her condition appears normal and doctors are planning to discharge her from hospital within the next few days if laboratory tests show a reading of no disease-related viruses in her body.

Previously, doctors had confirmed that the woman, who on Monday had taken a direct flight from Wuhan -- the epicentre of the outbreak of a coronavirus from the same family as the Sars pathogen -- was experiencing a high fever and an infected respiratory system, all symptoms of the disease.

Public health officials at the disease control unit at Suvarnabhumi International Airport found that the woman had a temperature over 38C. During an initial investigation, officials found that her condition matched the precaution criteria at which point she was sent to the airport's negative pressure room for monitoring. Doctors also checked 20 others who had been in contact with her but found no other cases.

"She is recovering now. If the virus is no longer in her body, she will be released from hospital. We are now on full alert to prevent a disease outbreak, especially during the coming Chinese New Year," Dr Suwannachai Wattanayingcharoenchai, head of the Department of Disease Control said.

"All passengers from Wuhan are checked by public health officials as the department has placed the highest level of precautionary measures in the Emergency Operation Centre," Dr Suwannachai added.

He added that the ministry has sent advisories to tour operators in case any sick person is found so that proper measures are taken. In addition, cooperation with the Chinese embassy is also in full swing.

The department is also monitoring a 70-year-old man in Nakhon Pathom province who developed a fever after visiting Wuhan. He is now being treated at Nakhon Pathom Hospital.

"We are waiting for laboratory results," Dr Suwannachai said.

Since the first case, the ministry has already screened 13,624 passengers arriving on 86 flights. Around 1,400 people from Wuhan -- a number that is expected to increase by at least 50% during the festival -- arrive in Thailand every day as the country is a preferred destination for tourists to celebrate New Year.

Meanwhile, Public Health Minister, Anutin Charnvirakul, insisted that the ministry could control the disease as it had learned from the Sars outbreak in 2002.

"The outbreak is still limited. Patients found in Thailand are all from Wuhan. We have not yet seen any patients with a history of visiting the source of the disease. We can't say whether the outbreak is serious or not but we have tried our best to limit any damage to Thais and tourists," he said.

However, virus experts say that the disease is moderate which means the body can create immunity to kill the virus but there are fears that the virus can mutate and become more deadly in the future leading to a critical outbreak.