School's out: Will haze order help?

Students in Samut Prakan's Muang district wear face masks as they arrive at Songwitthaya School, where teachers briefed them on how to protect themselves from hazardous PM2.5 dust particles. (Photo by Somchai Poomlard)

Somruethai Thammaporn, a 10-year-old Pathom 6 student at Wat Ratchanatda School in Phra Nakhon district -- where the PM2.5 level is the highest -- was relieved to hear that the Bangkok Metropolitan Administration (BMA) has ordered 437 schools under its jurisdiction to be closed today as air pollution has hit dangerous levels.

"It is good that we students don't have to walk to school and breathe polluted air. But I don't want the school to stay closed for too long because the lessons will be missed," Somruethai, also called "Jib", told the Bangkok Post on Tuesday.

Jib, who said the pollution has been irritating her eyes, does not know if the one-day closure will clear the air, but hoped that staying at home will give her eyes a rest.

Pollution in Bangkok has been getting worse since early this month. Unsafe PM2.5 levels were on Tuesday detected in 50 of 52 areas in greater Bangkok, ranging from 55 to 89 microgrammes per cubic metre of air (µg/m3), exceeding the government-set "safe" threshold of 50µg/m3.

Saint Dominic -- an all boys school located in the Asoke-Phetchaburi area, where dust particles in the air have been very high -- announced early on Tuesday that it will be closed from today until Friday.

Patt Preechapanich, the parent of a St Dominic student, commended the school for its decision, saying her son has developed a rash and nasal congestion from the pollution and cannot practise football.

"But school closures will only solve the problem partially. We need to see if the government will take more meaningful measures," she told the Bangkok Post over the phone.

However, since not all schools in Bangkok are closing, many students will still have to inhale bad air as they go to school.

Dawee Chaikere, a TV journalist and mother of three, said her two young boys still have to attend school, and the only protection is for them to wear masks. "But my boys can't wear masks for too long and pull them off after a while," she said in exasperation.

Kanokporn Natee, the mother of an eight-year-old student at Bangkok Christian College, an all-boys school on Sathon Road, said that even though the school is not closing, she is confident the children are well taken care of.

"The school has a system of ensuring that students wear masks at all times and that all activities are held indoors. The school has also been spraying water to keep dust levels down and is planting trees," she said.

While many students are delighted with the option of staying home, albeit for a short time, parents are asking if the decision to close schools is good for their children's education. 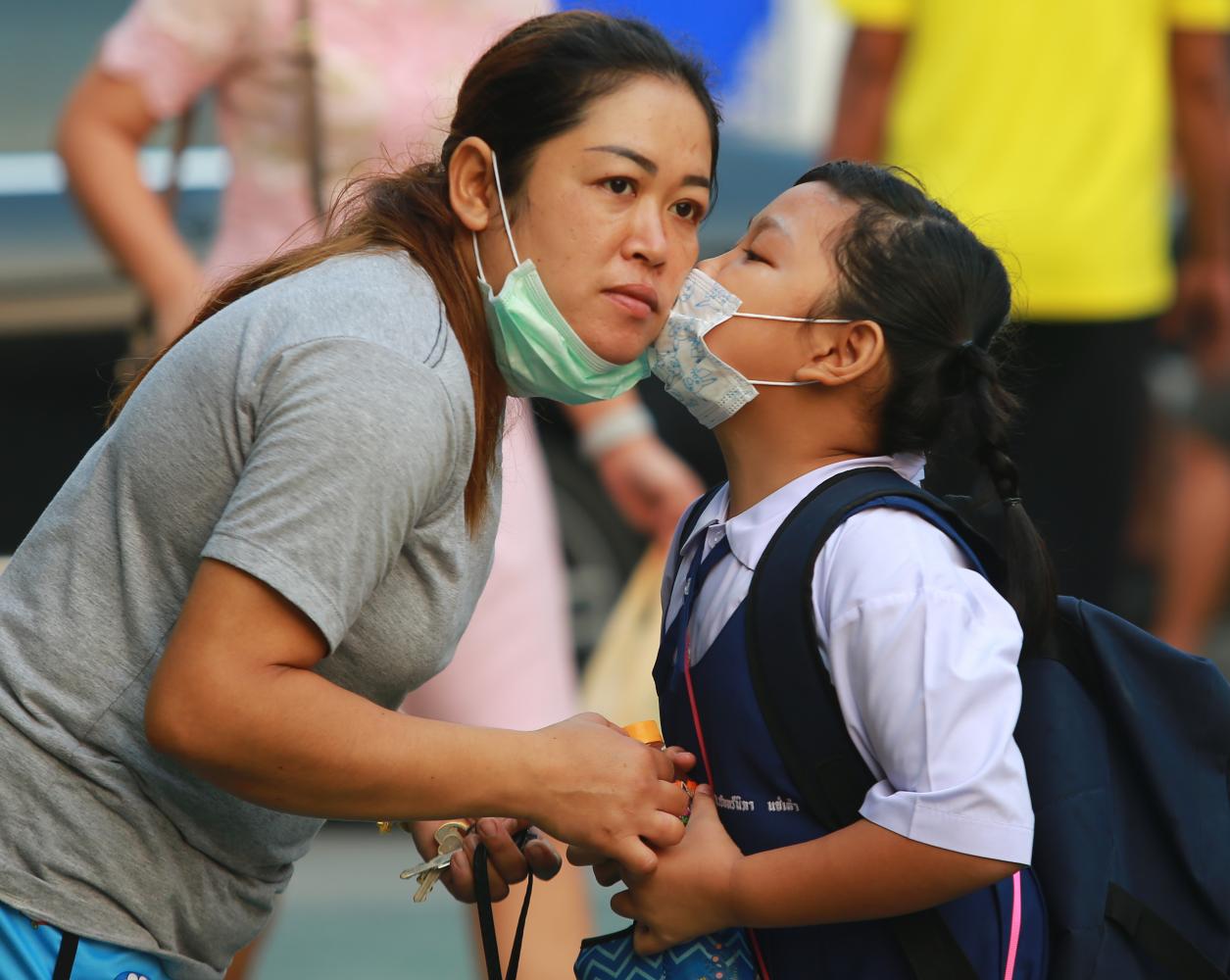 A girl kisses her mother through a face mask after being dropped off at the school in Samut Prakan.

"This policy will burden parents who need to work as they will be forced to leave their children at home. Their houses may not be air conditioned or have air purifiers to protect their children from pollution," said Sitthinan Nontanam, whose 10-year-old son studies at the BMA-run Wat Ratchanatda School.

"Schools are better at protecting children as they have measures in place and teachers are tasked with taking care of students and forcing them to stay indoors," said Mr Sitthinan, who has decided to take his son to work with him today, so the child doesn't play outdoors in his absence.

Sophavadee Sankosik, the mother of a 13-year-old girl, also asked if closing schools will really solve the problem.

"The question is: what will we do if the pollution is prolonged for another month? Will we close schools every time the PM2.5 levels exceed safe limits?" she asked.

Ms Sophavadee said the government should impose long-term measures that solve the problems at their root, instead of imposing short-term measures such as closing schools every time pollution exceeds safe limits.

She added that she was waiting for the government to take proper action, such as banning polluting cars. "People are waiting for direction and they are ready to cooperate. But what we are lacking is leadership ... we are waiting for a leader who dares to make tough decisions, which might upset some, but is good for health and the environment in the long term," she said.

LONDON: British Prime Minister Boris Johnson was battling the coronavirus in intensive care on Tuesday, raising serious concerns on Tuesday about his health and the government's response to the still-escalating outbreak.

The cabinet on Tuesday approved an Education Ministry proposal to postpone the reopening of all schools for the new semester from May 16 until July 1, as a measure to control Covid-19.

PHUKET: The provincial communicable disease committee on Tuesday issued an order requiring people going outdoors to always wear a face mask, or face a fine of up to 20,000 baht.