Divers search for gold items that were believed dumped in the Chao Phraya River near Bang Rachan Bridge in Sing Buri. They were later found at the home of the suspect's father. (Photo by Pornprom Satrabhaya)

A 38-year-old school headmaster in Sing Buri was arrested on Wednesday on suspicion he committed a Jan 9 murder-robbery at a gold shop in Lop Buri.

Police swooped after tip-offs and a clue about the gun used in the crime helped identify Prasittichai Khaokaew as the prime suspect, sources said.

A two-year-old boy and two adults were killed and four others injured during the gold shop heist.

Following up on tip-offs from unnamed sources that placed Mr Mr Prasittichai as a suspect, the Crime Suppression Division's (CSD) team gathered evidence that supported the case against the director of Wat Pho Chai School, said an informed source.

Among key pieces of evidence was information about the type of gun used in the heist, said the same source. 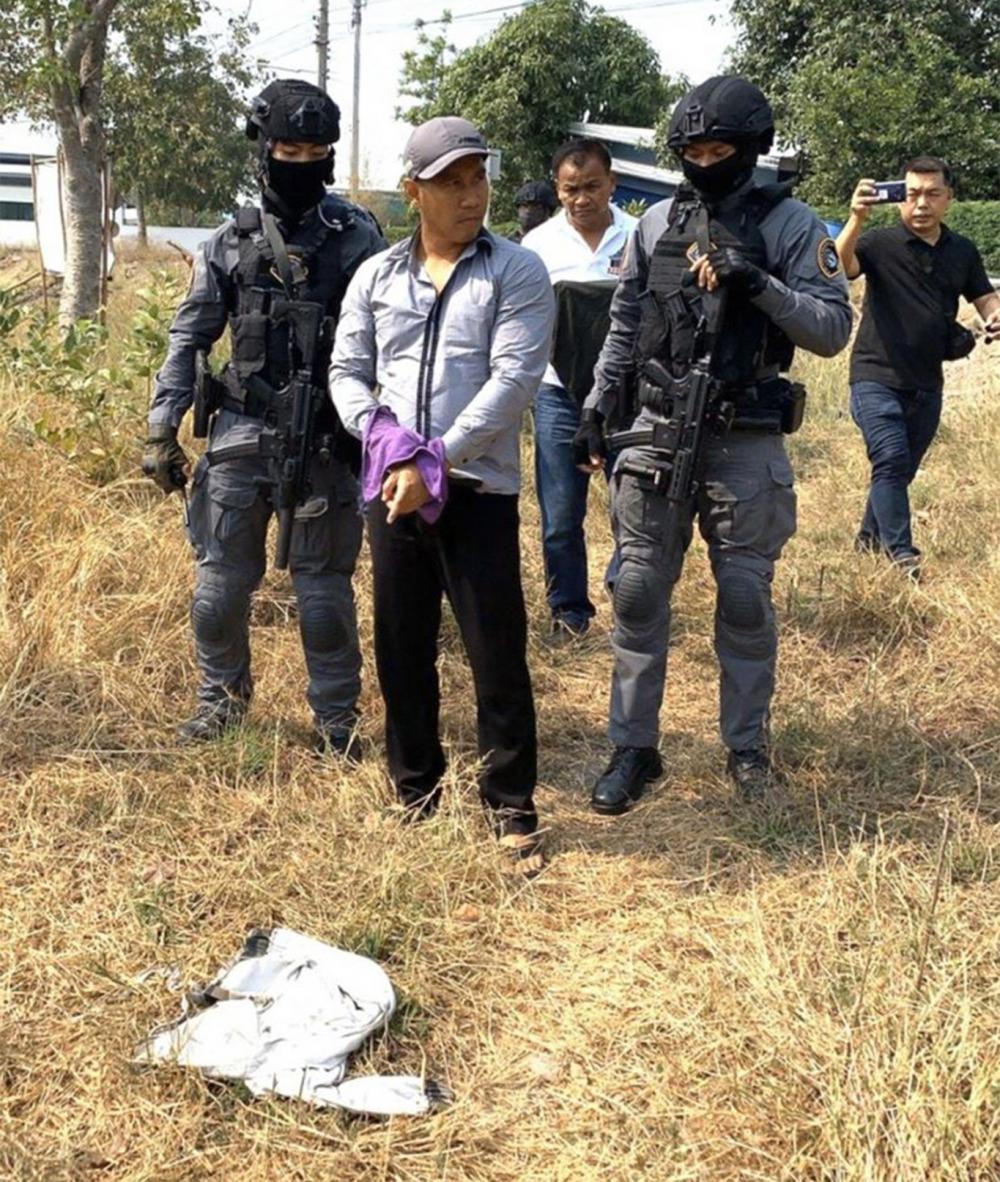 The suspect leads police officers to a location in Lop Buri's Muang district where he dumped his clothes. (Police photo)

Police found only 13 guns of precisely the same model in Lop Buri. One belonged to Mr Prasittichai's father, said the source, a former police officer.

Another important clue was the gun's silencer, caught on security footage during the murder-robbery.

The CSD team brought in a firearms vendor, who immediately recognised the silencer as the same model as the one he had earlier sold to Mr Prasittchai, said the CSD source.

The Samut Sakhon-based vendor is also the country's sole producer of this model of locally made silencers. 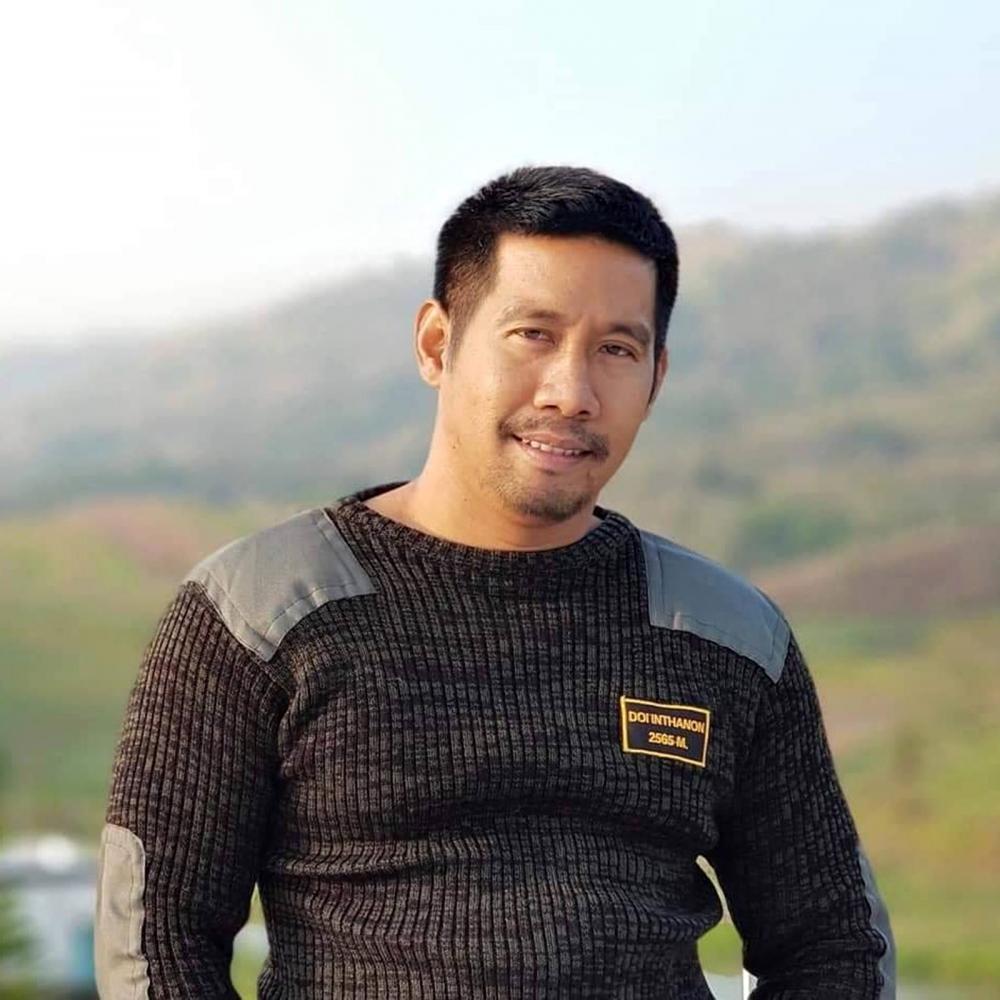 He said he had received orders from customers nationwide but only one order from Lop Buri, which came from Mr Prasittichai, according to the source.

That explained why authorities had focused their investigation on Mr Prasittichai from the beginning, he said.

The police used the silencer's trademark logo to trace it back to the vendor, said the source.

The vendor remembered the sticker, said the source, adding the clue still left police short of the evidence they needed to make an arrest.

But after further investigation, the CSD team sought an arrest warrant for the school director on Tuesday evening, the source said.

A CSD special operation team had been tracking the suspect, waiting for the green light to pounce, said the source.

Wednesday morning the team followed Mr Prasittichai as he drove his Bangkok-registered BMW Series 5 car from his home in Lop Buri to the school in Sing Buri, said the source. 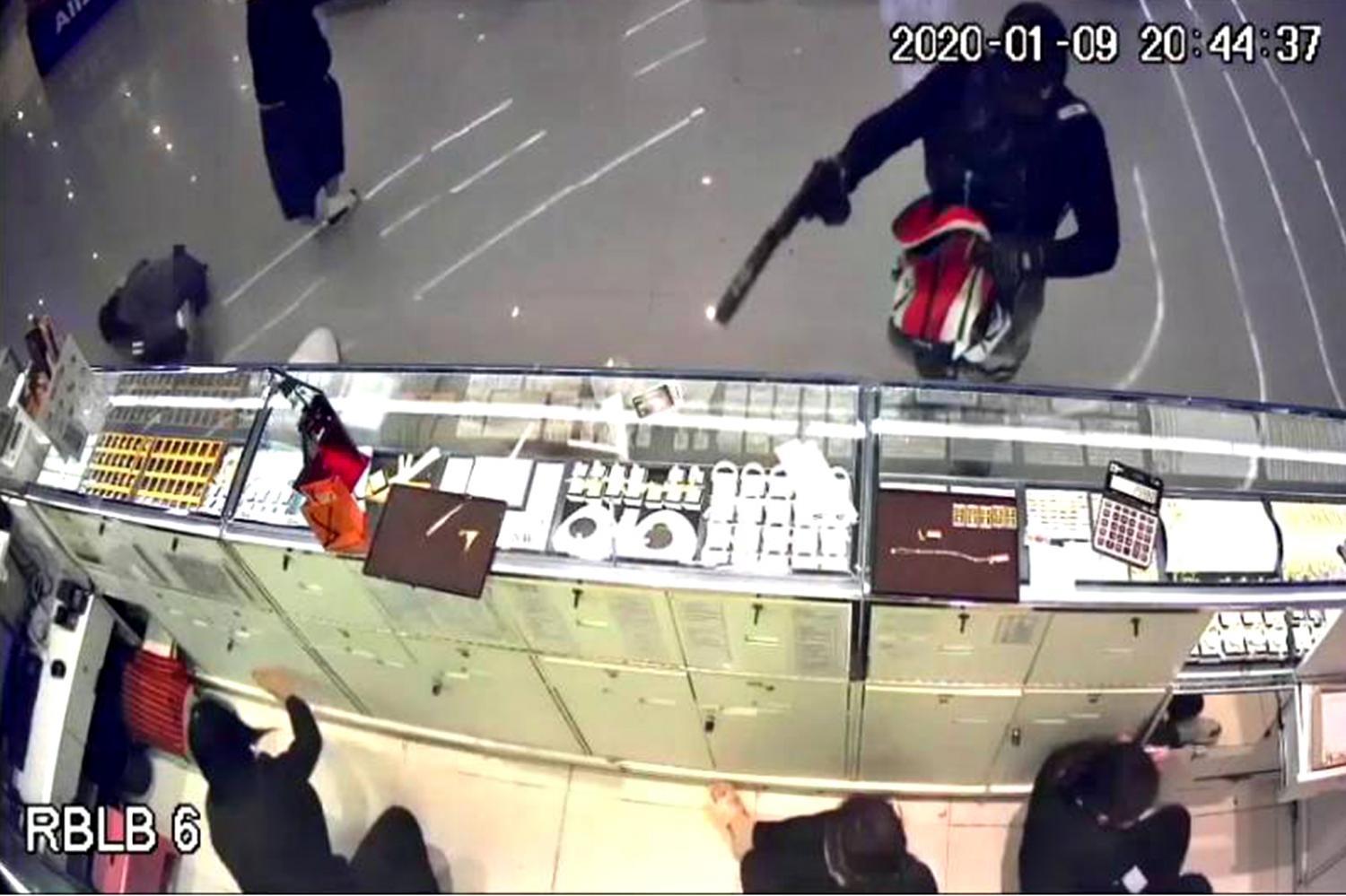 Mr Prasittichai was pulled over and arrested as he drove along Highway No.311 in tambon Tha Wung, Lop Buri, said the source.

Faced with a team of fully armed police officers, Mr Prasittichai surrendered peacefully, said the source, adding that several rounds of the same type of 9mm ammunition used in the Jan 9 heist were found in his car, but no gun.

The bullets were seized for examination and the suspect whisked away to Lop Buri Tourist Police station for questioning, said the source.

During the interrogation, Mr Prasittichai confessed to being the Jan 9 robber motivated by the desire for new excitement in his life, said the source.

Both the gun and the motorcycle were returned to their owners after the robbery, said the source. 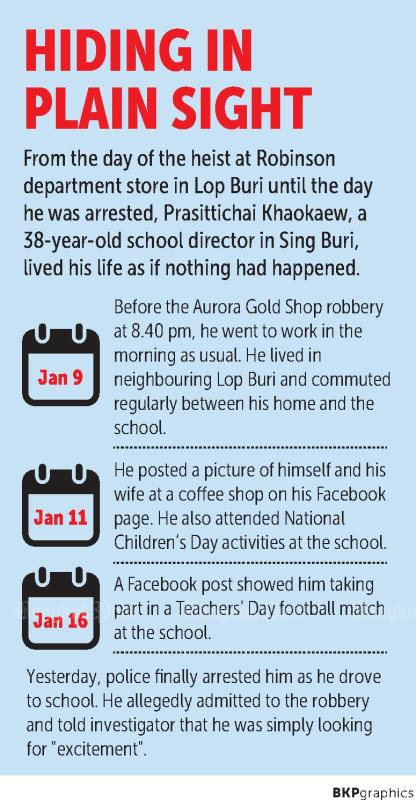 Police will brief thee press on the arrest at Royal Thai Police headquarters on Thursday.

Mr Prasittichai, a gun enthusiast with a master's degree, got married three years ago to a school teacher. According to his colleagues, he and his wife were a happy couple who lived a modest life in Lop Buri.