Thai returnees disembark from Thai AirAria flight FD571 from Wuhan in China that arrived at U-Tapao airport in Rayong province on Tuesday night. All 138 returnees will be screened for coronavirus symptoms and quarantined for 14 days. (Photo by Wichan Charoenkiatpakul)

He was speaking after health authorities contacted Seoul for information about a Korean woman found infected with novel coronavirus on her return from Thailand despite having never visited China.

Dr Tanarak said that authorities were informed of the case in South Korea and were seeking details of her test results, condition and where she had visited in Thailand.

The information would help them locate people who might have been in contact with her, so they could be checked for the virus.

The 42-year-old South Korean woman tested positive for the virus after arriving home from Thailand on Jan 19. She became ill on Jan 25. Now in quarantine, she is the 16th person found to have contracted the virus in South Korea. 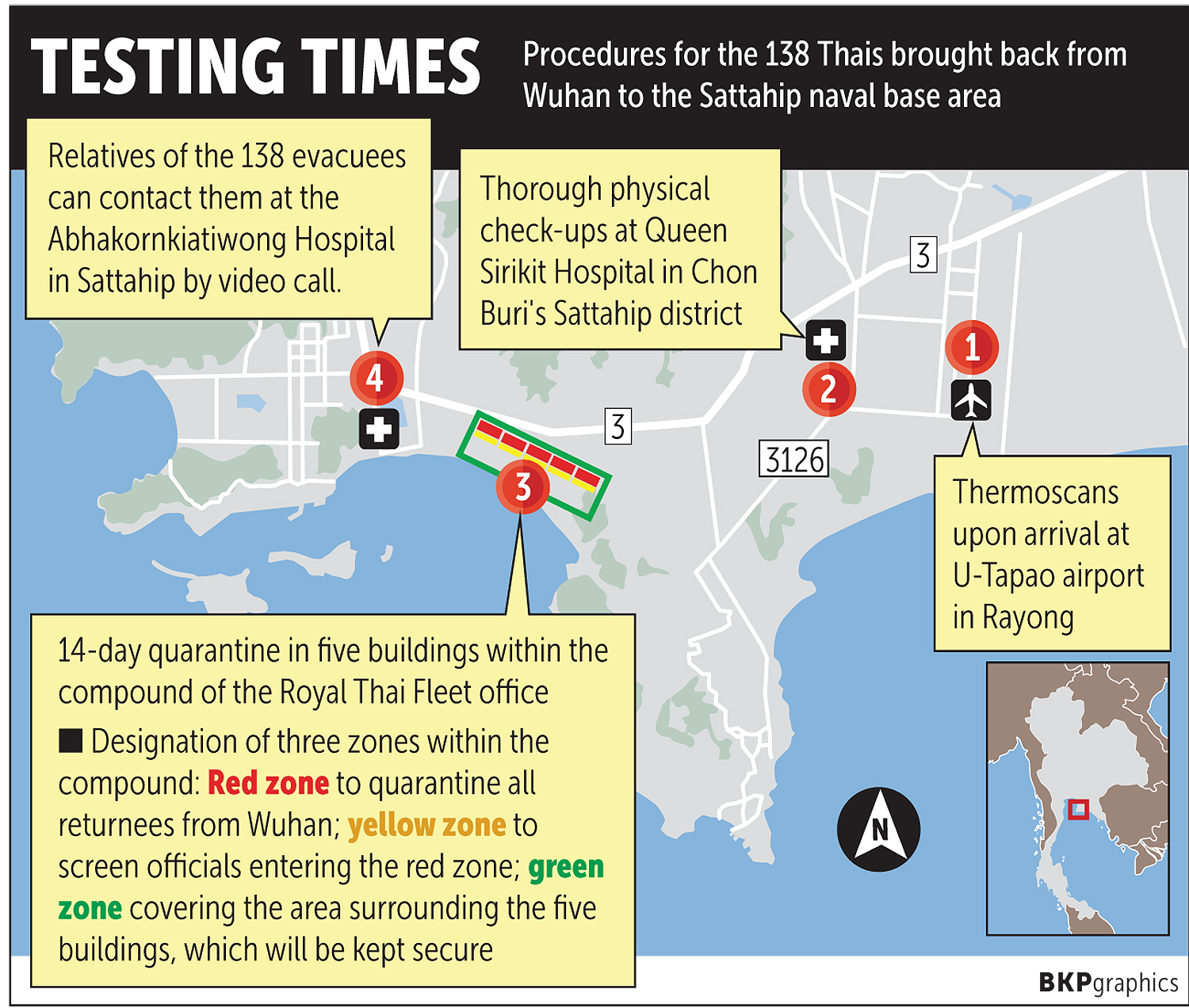 "The case of the Korean woman does not change the degree of risk concerning the disease in Thailand. Chances of contraction remain low in this country," he said.

"Now we are trying our best to find as many infected cases as possible and also people who have been in contact with them."

A quick response was preventing transmission increasing to a severe level, he added.

Suwannachai Wattanayingcharoenchai, director-general of the Disease Control Department, told the press that the four Thais included a couple who had just returned from Japan.

The two others were drivers who had driven Chinese tourists in their vehicles.

Dr Suwannachai said five of the six were recovering well and would be discharged from hospital when free of the virus.

The sixth and most recent patient was moved from a private hospital to the Bamrasnaradura Infectious Diseases Institute and placed on a respirator as he is 70 years old and has underlying tuberculosis.

He was the driver of a van that took an elderly Chinese woman to Hua Hin, where she was receiving treatment for the infection in hospital and her health was improving.

The number of infections discovered in Thailand rose from 19 to 25 on Tuesday. Eight people have recovered and been discharged while the other 17 remained in hospitals.

A Thai AirAsia plane from #Wuhan with 138 Thais evacuated from the Chinese city has arrived at U-tapao airport. #BangkokPost #Thailand #coronavirus pic.twitter.com/j327Kn1lwe

Meanwhile, Deputy Prime Minister and Public Health Minister Anutin Charnvirakul said on Tuesday 138 Thais had boarded a Thai AirAsia flight from the epicentre of the outbreak, Wuhan in China, to Thailand.

A total of 144 Thais in Wuhan and Hubei province had been due to arrive in Thailand aboard an Air Asia flight Tuesday night.

However, only 141 showed up at Wuhan airport for the evacuation flight.

Mr Anutin said 138 of the 141 had passed health checks and were allowed to board the plane to Thailand.

Of the three not allowed to leave China, two had fever while the other was found to have overstayed their visa.

Adm Sittiporn Maskasem, the Royal Thai Navy's chief of staff, on Tuesday gave assurances that the navy and the Public Health Ministry had measures in place to look after the Thais flown back from Wuhan, and to prevent the spread of the coronavirus.

They were set to be screened with thermoscans at the airport before receiving health checks at Queen Sirikit Hospital in Chon Buri's Sattahip district.

Those who have virus symptoms will be treated and quarantined at the hospital, while the rest will be quarantined in five buildings at the Royal Thai Fleet headquarters