NAKHON RATCHASIMA: Nun Amornrat Putta-ariyawong was washing dishes in preparation to host Buddhist devotees on a holy day when a military Humvee pulled up just inside the temple gates and the driver started shooting into the road.

"When the first round of shots was fired, everyone thought it was one of those firecrackers going off," Ms Amornrat, clad in white robes, recalled on Sunday.

Instead, a Thai soldier fleeing his military base after killing a guard and his commanding officer was gunning people down in the early stages of an 18-hour shooting spree in which he would kill 29 people.

"Anybody, any vehicle within his eyesight, he'd shoot them all," Ms Amornrat said.

The soldier, identified as Jakrapanth Thomma, was finally shot dead early Sunday in the basement of the Terminal 21 shopping mall in the northeastern city of Nakhon Ratchasima.

But the rampage began before he reached the mall, and it included a stop at Wat Pa Sattharuam, where the gunman started shooting from just inside the gates of the normally serene temple.

In all, nine people, including two police officers, died outside the tree-lined temple as the gunman shot at his pursuers and then targeted passers-by, according to residents who witnessed the shooting. Police have not yet confirmed exactly how many people died at each location.

"When the first round of shots was fired, we were all still going about our usual business. The monks were sweeping and I was washing dishes and talking to a dog," nun Amornrat said.

Saturday was Makha Bucha day, a holiday in the Theravada Buddhist tradition that honours the Buddha ordaining some of his first followers. Temples typically host candlelight ceremonies, but this year the carnage overshadowed the event. 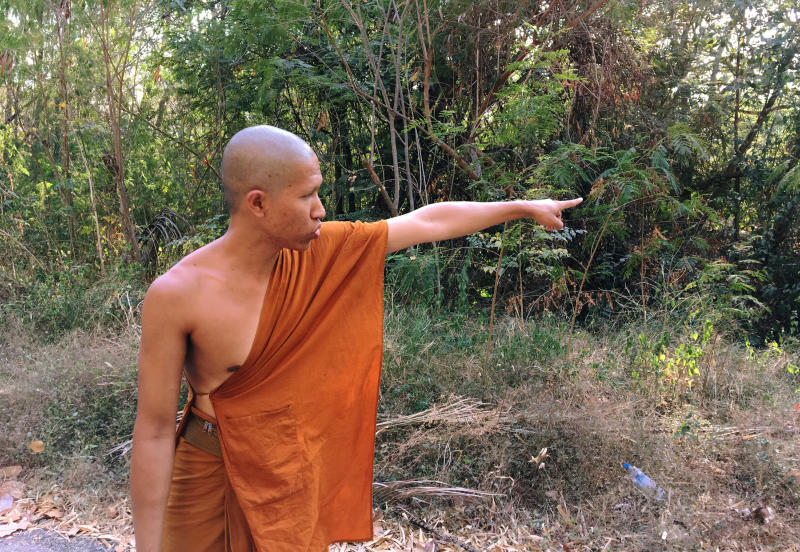 Saffron-robed monk Luang Phi Kla, said he was sweeping the road in front of the temple at around 4.30pm on Saturday when the Humvee pulled up. When he heard gunshots, he turned around.

Witnesses say the soldier – who military officials said had training in ambush techniques – positioned himself at an intersection just metres from the gate where he could see vehicles coming from two sides but could remain hidden.

He began firing at police vehicles in a standoff that lasted about 30 minutes. At some point, however, the gunman also began targeting passers-by.

Luang Phi Kla vividly remembers watching the soldier gun down a student on a motorbike.

"The shooter still went over and shot the student in the head, even though he already fired many bullets," he said.

Another car, with five passengers, was already backing away when the shooter fired at the tires.

"He then went back to his vehicle, picked a new gun, and went over to open the car doors and shot them one by one," Luang Phi Kla said. Four of the five passengers died.

The soldier then got back into the stolen Humvee and drove away, reaching the shopping mall where he made his last stand.

By Sunday afternoon, yellow police tape cordoned off the street with dozens of circles marking where bullet casings were found.

The temple's stunned monks and nuns were left with the memory of authorities piling up bodies on the road outside their gates.

"I never dreamed this would happen in a temple, in our country," said the monk, Luang Phi Kla.

"It's like he didn't see the value of other people's lives, just shooting at them like they were vegetables or fish," he said. "He didn't even spare a child."