Kannikar Copland, 40, the mother of Pvt Metha Lertsiri, holds his picture during the funeral of her son at Wat Somporn in Muang district of Udon Thani on Feb 11. The death of the private, a single father, left his four-year-old son orphaned. (Photo by Yuttapong Kumnodnae)

A video showing the soldier involved in last weekend’s mass shooting in Nakhon Ratchasima firing shots at an army private before taking firearms and ammunition from an armoury went viral online on Saturday.

The emergence of the video comes after a week of hand-wringing and public condemnation of the behaviour of internet users and media outlets that shared grisly images of the slaughter.

The authenticity of the three-minute-long clip, reportedly obtained from rescue workers in the province, has not been confirmed. The Bangkok Post has chosen not to show or link to any of the videos or stills.

The clip is a compilation of video from three locations. In the silent one-minute first video, a man who looks like Jakrapanth Thomma, 32, armed with a shotgun, walks to the armoury at the Surathampitham military camp. He is seen talking to Pvt Metha Lertsiri, 23, who was guarding the site on the afternoon of Feb 8. Pvt Metha then walks into a nearby room with open doors and the soldier fires two shots in his back. The private falls to the ground.

The soldier then fires shots at the lock of the wooden door to the next room and opened the door.

The private was the third victim of the shooter, who had earlier shot two people to death nearby. The attacker then took several weapons and ammunition from the armoury before going on a rampage that resulted in the deaths of another 26 people.

The second part of the video, which is 1.50 minutes long, shows the cordoned scene around Wat Pa Sattharuam monastery and some of the spots where nine people had been gunned down by the soldier.

According to news reports, after Jakrapanth took the guns, he stole a military truck that looked like a Humvee, but the army insisted it was just a modified truck.

He then went to the monastery. There, he loaded the weapons and started shooting passers-by randomly, killing nine in total before driving to Terminal 21 shopping mall in downtown Nakhon Ratchasima.

The third part of the video was taken in front of Terminal 21 at night. Gunfire can be heard from the inside and rescue workers are seen carrying a woman and escorting a man to get medical help.

Volleys of gunfire rang out before dawn on Sunday, hours before police commandos moved into the ground floor of the shopping mall, where the gunman had holed up.

Jakrapanth took 29 lives and wounded 58 others in total before police commandos shot him dead around 9am, ending the rampage that lasted more than 17 hours.

On Feb 14, the army issued an order to promote slain Pvt Metha posthumously to the rank of sergeant for his dedication to duty. 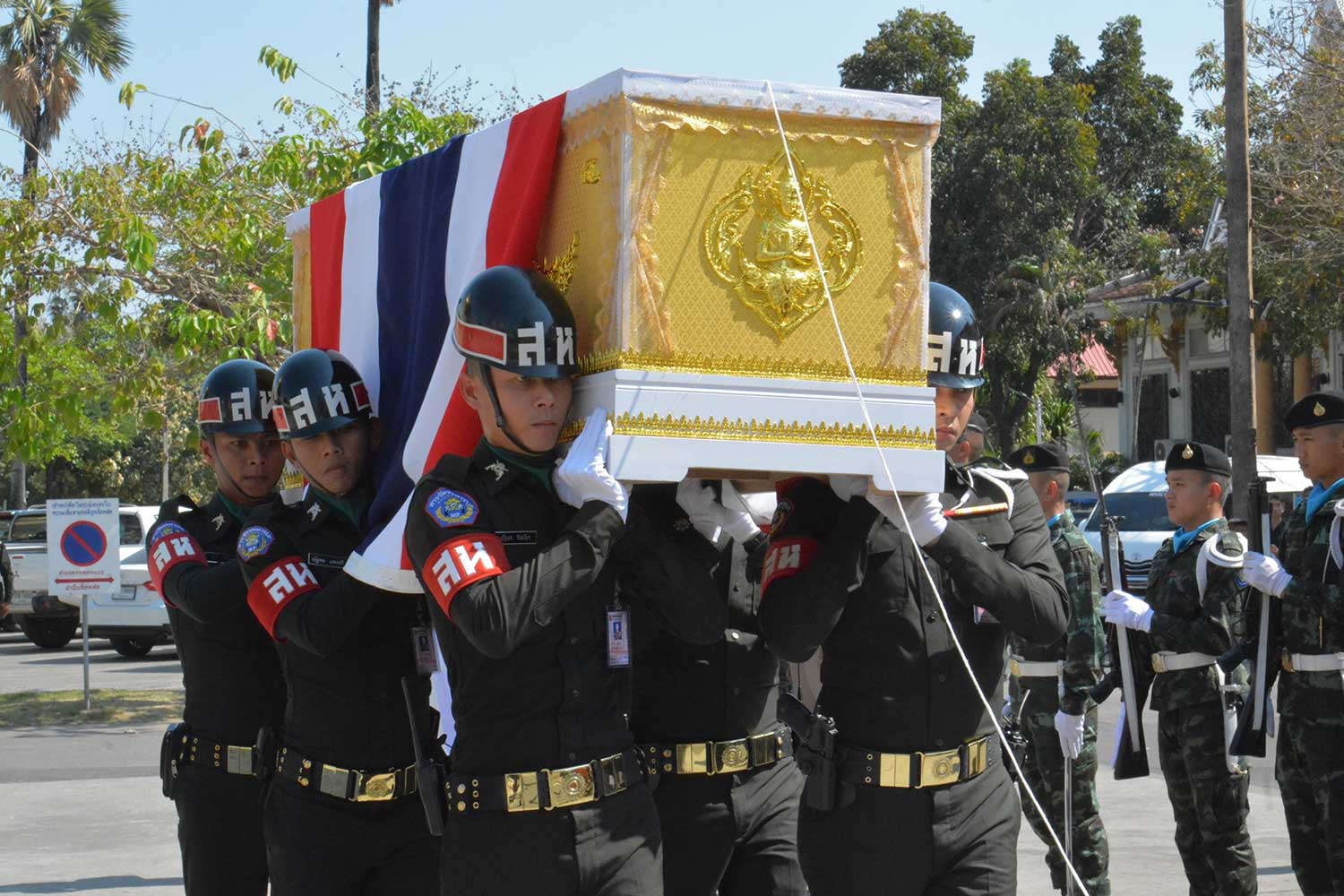 Soldiers carry the coffin of slain Pvt Metha Lertsiri at his funeral at Wat Somporn in Muang district of Udon Thani on Feb 11. (Photo: Yuttapong Kumnodnae)