A thick oil slick in the sea off Hua Sai beach in Nakhon Si Thammarat on Tuesday. (Photo by Nurajee Raekrun)

NAKHON SI THAMMARAT: Two weeks after thick oil slicks and tar balls again began polluting the sea and beaches of Hua Sai district, to the detriment of tourism and fisheries, steps are being taken to tackle the problem.

Deputy provincial governor Thawornrat Kongkaew on Tuesday morning chaired a meeting of heads of government offices and local administrations in Hua Sai district to discuss and lay down measures to clean up the area.

Mr Thawornsak said he instructed that samples be taken from the oil slicks for examination to find out where they were from.

It was initially believed they came from two oil rigs in the Gulf of Thailand and from fishing boats. However, the operators of the drilling platforms insisted they had not had any spills.

A coordinating centre will be set up for information gathered by the various agencies tackling the issue. (continues below) 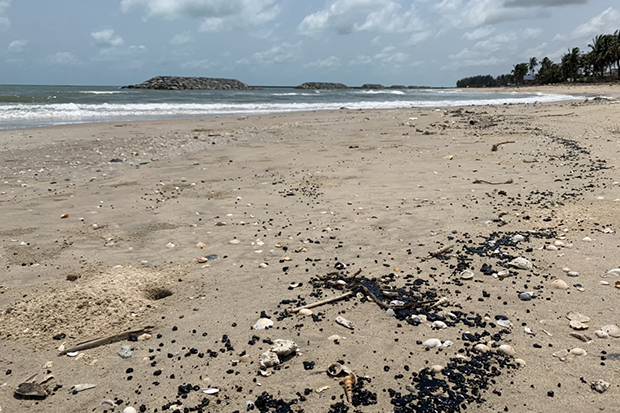 The marine office of Nakhon Si Thammarat has filed a complaint with Hua Sai police, asking they find those responsible for the pollution and hold them liable for the damage.

Local administrations are to organise volunteers to regularly clean up polluted beaches in tambons Na Saton and Ko Phet.