An official looks at a computer monitor to check passengers' body temperatures with a thermal scanner upon their arrival at Suvarnabhumi airport. (Photos by Wichan Charoenkiatpakul)

The Civil Aviation Authority of Thailand (CAAT) is requiring travellers from Covid-19 infected countries and territories to produce medical certificates prior to boarding their flights to Thailand to curb the spread of the novel coronavirus.

Transport Minister Saksayam Chidchob said on Monday the CAAT has issued an official announcement, saying travellers from South Korea, China, Italy, Iran, Macau and Hong Kong who fail to show their health certificates to authorities before boarding their flights to Thailand will not be allowed to continue their journey.

The restrictions are in line with Thailand's Communicable Diseases Act (2015), the minister said.

Upon arriving at Thai airports, they must present their health certificate along with a filled-out T8 form to disease control officials for verification, said Mr Saksayam.

According to the minister, anyone found producing fake certificates to Thai health authorities will face legal action and mandatory quarantine.

Mr Saksayam also assured that Suvarnabhumi airport, as Thailand's main international gateway, has put strict screening measures in place to help curb the spread of the disease from air travellers. 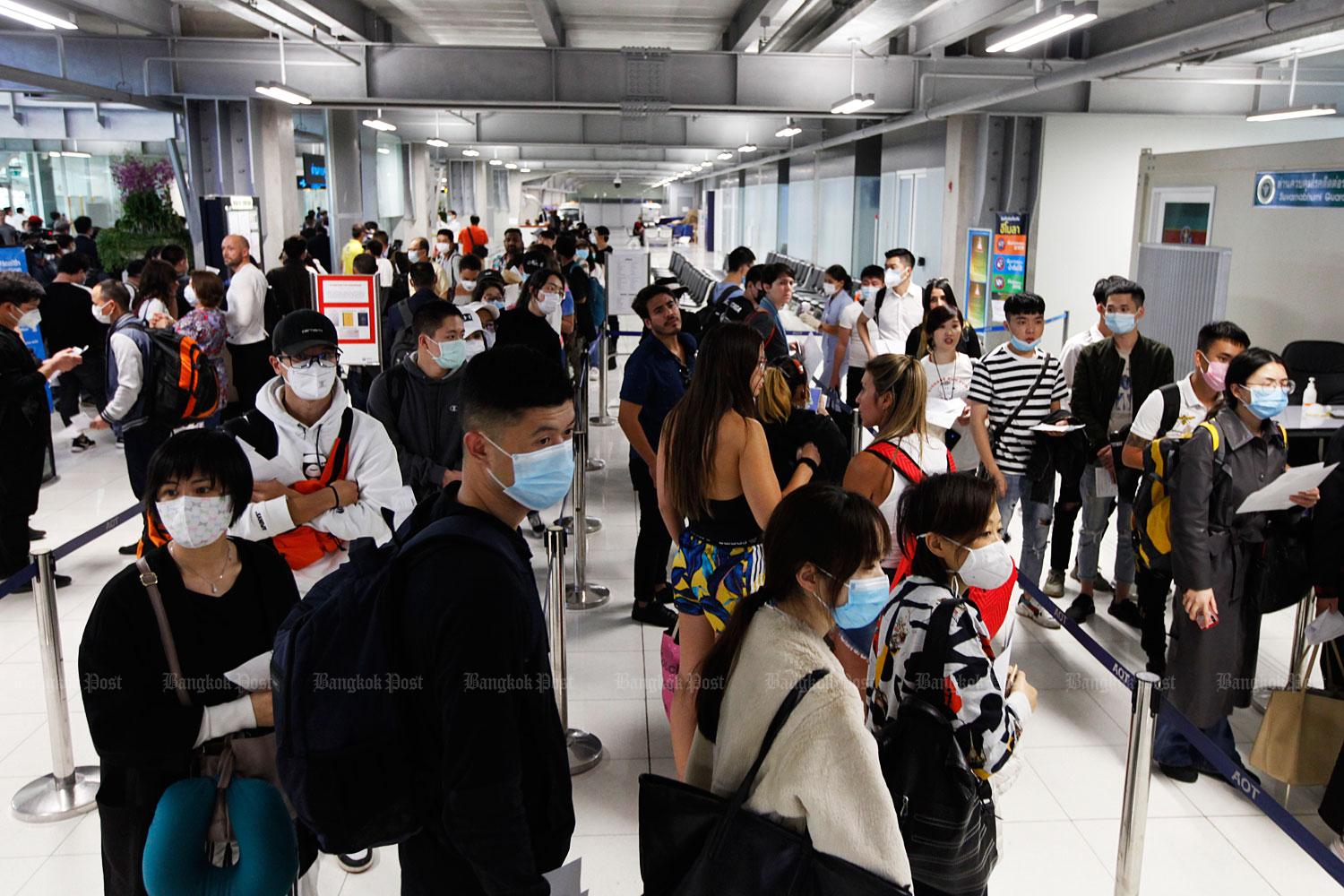 Travellers queue up for thermal scanning at Suvarnabhumi airport before reaching immigration.

He also insisted that to date, airport officials assigned to screen passengers have not shown any fever and/or other symptoms.

"Boat passengers and crew will be required to provide health certificates to enter Thailand, and they will also be subjected to the country's quarantine regulations," Mr Withaya said.

In addition, boat captains must submit necessary documents to disease control authorities 24 hours prior to docking, he said. 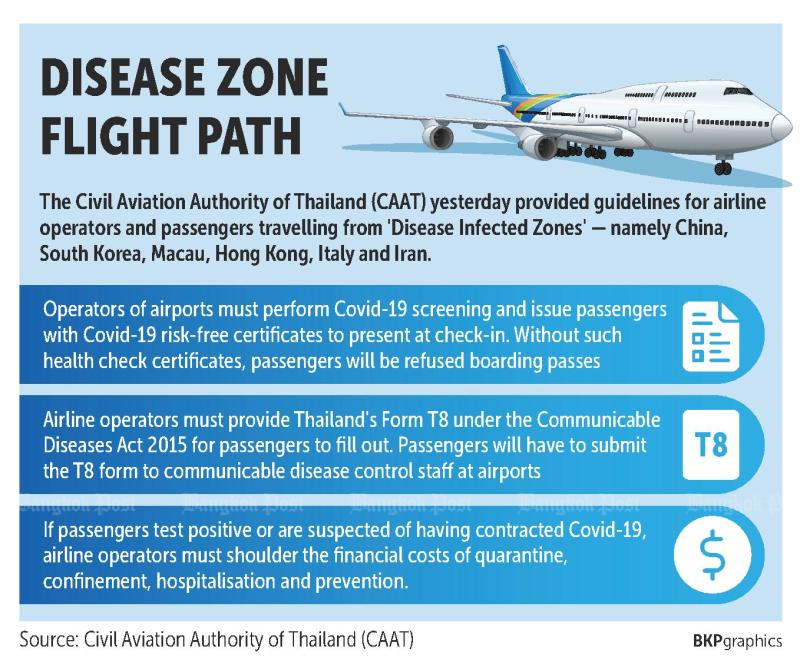 The documents include the maritime declaration of health, a list of 10 ports they had just visited, crew and passenger manifest and the results of their body temperature checks over the past week. Violators are liable to fines of between 1,000 and 10,000 baht.

As of Monday, Thai officials had confirmed 50 local cases of Covid-19. Thirty-three people have recovered, 16 patients are still in hospitals while one has died.

The latest confirmed case involves a Thai student who recently returned from Iran. Officials in Nakhon Si Thammarat have identified 157 people who came in close contact with the infected student. Their blood samples were being tested, but some of them had already left Thailand.

Another 4,518 people have been placed under observation. Of them, 2,729 has been cleared or recovered. Most of them had seasonal influenza, he said.

In another development, health authorities and local officials in Nakhon Pathom's Muang district, on Monday raided a hotel where a group of 32 Chinese tourists were staying, following tip-offs from netizens on social media which sparked worries among local residents.

After the raid, officers found that the Chinese tourists were employees of a private firm, who travelled from China's Zhejiang province. All were found to be in good health. 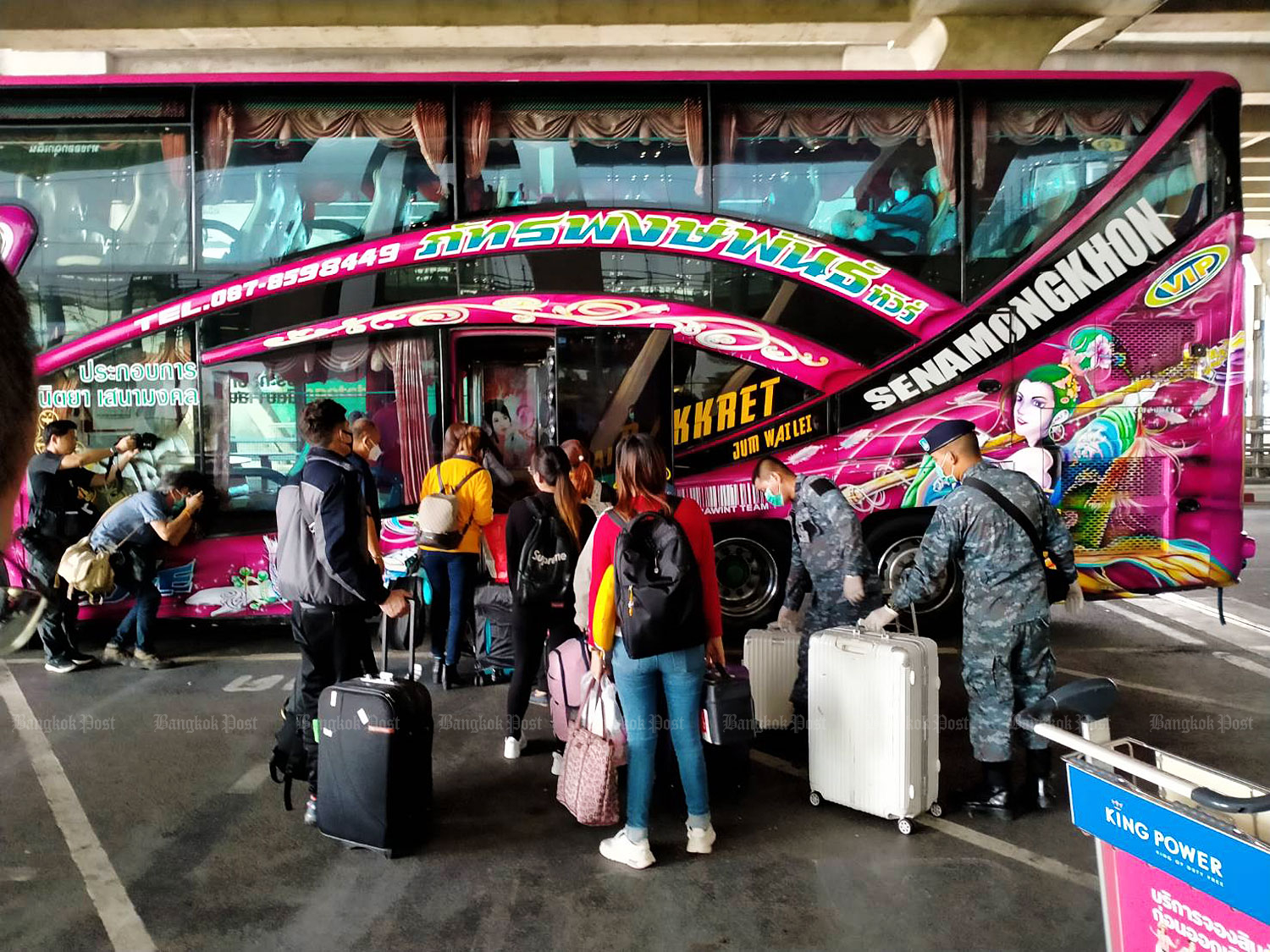 Soldiers help Thai illegal worker returnees from South Korea as they board a bus from Suvarnabhumi to a navy facility in Sattahip district of Chon Buri to go into quarantine.