Masking a crisis: A couple wearing face masks cross the road at a busy intersection near Siriraj Hospital. The Covid-19 outbreak has sparked high demand for protective masks. Many hospitals are now accepting donations of masks.

Thailand has stepped up control measures to combat the Covid-19 outbreak after the country reported six new cases in a single day on Wednesday, including two where the source of infection could not be identified.

The measures include cancellation of visa-free arrival for Italy, South Korea and Iran, as well as the cancellation of Visa on Arrival (VoA) for 18 countries and territories, and forced 14-day self-quarantine for visitors from four high-risk countries — China, Iran, Italy and South Korea. 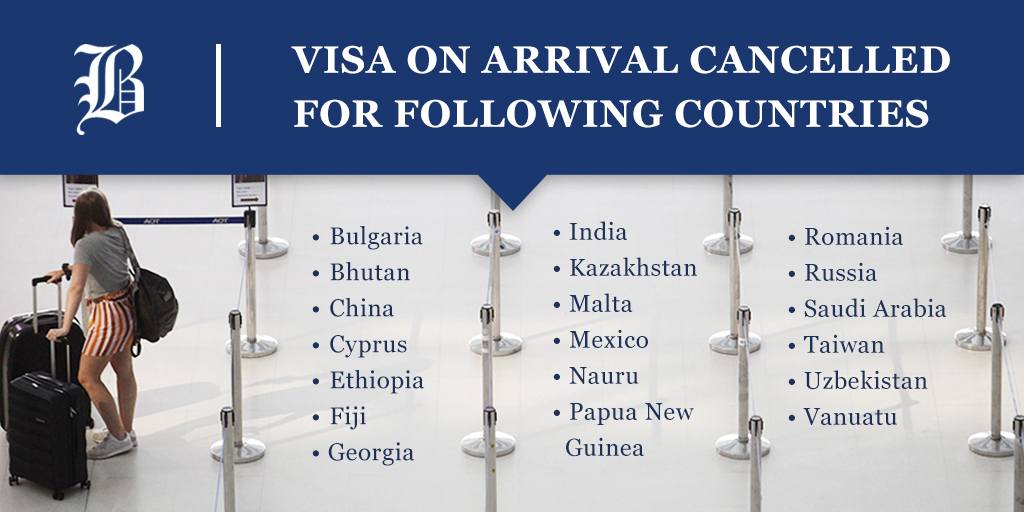 The changes were announced on Wednesday by Prime Minister Prayut Chano-cha after he attended a meeting with Interior Minister Anupong Paojinda, Public Health Minister Anutin Charnvirakul and Transport Minister Saksayam Chidchob on measures to prevent transmission of the new coronavirus.

The interior minister has the authority to enact regulations under the Immigration Act, which follows an earlier announcement by the Civil Aviation Authority of Thailand (CAAT) on Monday that travellers from South Kor ea, China, Italy, Iran, Macau and Hong Kong must produce medical certificates prior to boarding flights to Thailand.

Gen Prayut said the new travel regulations were necessary to respond to the changing situation, noting the Foreign Ministry will inform those countries and territories of the moves and ensure they understand the situation. These measures will be temporary until the situation improves. He added the ministers had also agreed to impose mandatory quarantine for foreign nationals who travelled to high-risk countries in order to contain the spread of the Covid-19 virus. Upon arrival they will be quarantined at Novotel Suvarnabhumi Hotel for two weeks.

Thai nationals returning from highrisk areas will be taken in special buses arranged by the Transport Ministry to their home provinces for quarantine. They will be monitored closely by local authorities. Gen Prayut said full compliance is required to prevent further transmission of the virus. “If we don’t take these steps, we may not be able to contain the spread. We don’t want to enter Phase 3 [community transmission],” he said, while admitting the stricter travel regulation would cause a sharp drop in tourist arrivals and affect businesses.

Meanwhile, Gen Anupong expressed confidence new travel regulations and existing measures implemented by airlines will block travellers from at-risk countries from entering the country. Visitors will be required to produce health certificates when the apply for visas to prove they are not infected with the virus.

Gen Anupong also said the government has agreed to follow the Public Health Ministry’s quarantine recommendations by sending Thais with a history of travel in at-risk areas to be isolated in their homes under close supervision of authorities instead of at quarantine centres provided by the state.

He said the measure went into effect on Tuesday and aimed to prevent a repeat of what happened on the Diamond Princess cruise ship, where the quarantine appeared to fail. “Keeping people in one place, like in the case of Diamond Princess, may cause widespread infections,’’ he said. As for the thousands of illegal Thai workers in South Korea who want to return home, he said there were several steps for them to go through before they are allowed to board the planes.

Meanwhile, the Disease Control Department has added Spain to the countries for which it has issued travel advisories after the number of confirmed Covid-19 cases there rose beyond 1,600 yesterday. Sophon Iamsirithavorn, director of the DDC’s Bureau of General Communicable Diseases, said Thais are advised to avoid unnecessary travel to Spain.

The Public Health Ministry yesterday reported six new Covid-19 cases, five Thais and one Singaporean, bringing the total number of cases to 59. Of the new cases, two had not travelled to any of the affected countries nor had they come in contact with confirmed patients. One is a 25-year-old male office worker and the other a 36-yearold Singaporean owner of a restaurant in Bangkok.