Thai infections still 'on the rise'

Travellers wait for buses to take them back to their home provinces, at Mor Chit terminus on April 12, 2019, during the last Songkran celebration. (Photo by Apichit Jinakul)

People returning from cities to their home provinces for Songkran could be a vector for spreading the coronavirus disease to older members of their families, a disease specialist warned on Thursday.

The warning came from Thiravat Hemachudha, director of the Health Science Centre of Emerging Diseases at Chulalongkorn University.

Songkran is a major event, more so than the calendar New Year, when young working people return home en mass to visit their parents and other family members, he said.

But their behaviour also made them prone to spread the virus to other people. 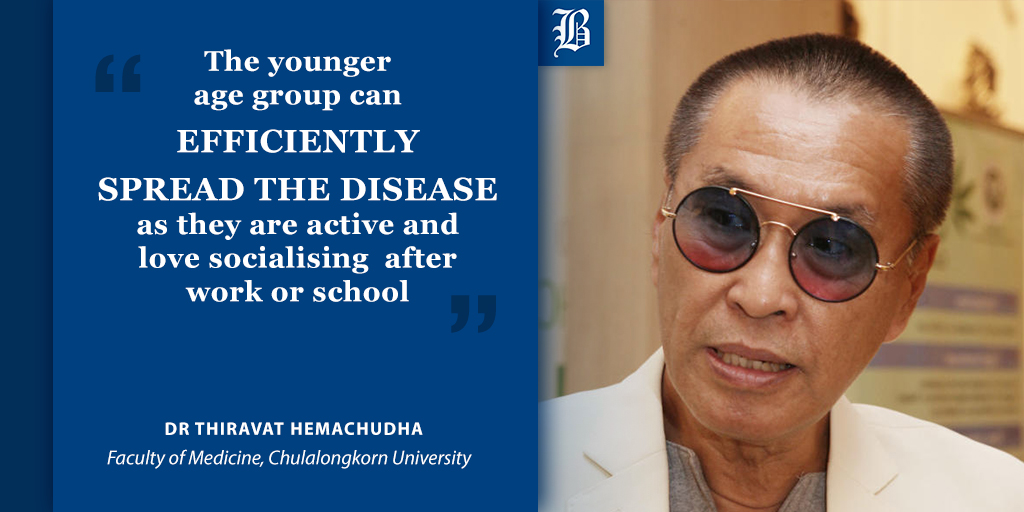 "The younger age group can efficiently spread the disease as they are active and love socialising after work or school," Dr Thiravat said in an interview on CU Radio of Chulalongkorn University on Thursday.

When they return home during the Thai New Year break the coronavirus situation in Thailand could worsen, he said.

Dr Thirawat, a member of the faculty of medicine, is an epidemiologist specialising in emerging diseases.

His worries about young people were reflected in the latest report on local Covid-19 cases on Thursday, when 11 people aged 25-38 years were found infected with the virus - the first cluster infection detected in Thailand.

Some members spread the infection to the others in their group during drinking sessions together when they shared drinking glasses and cigarettes.

Dr Thiravat said large gatherings of local and foreign holidaymakers for parties could be a factor accelerating the spread of the disease if health measures to contain it are not strictly enforced. He advised a 14-day quarantine for all, both locals and foreigners, before the festival.

"People misunderstood that I wanted to lock down houses, provinces and the country," he said in the radio interview. "I just want to ensure health safety."

Many major Songkran activities have already been cancelled. These include the celebrations on Khao San Road in Bangkok, in Chiang Mai, at Patong beach in Phuket, in Hat Yai and Khon Kaen.

Dr Thiravat  said the number of cases in Thailand was "on the rise", with more more still to come -  like a "chain reaction".

"What we don't know is how many young men and women have been infected and how many can spread it," he said.

There are 70 confirmed cases of Covid-19 disease in Thailand, with the latest being the cluster infection announced by the Public Health Ministry on Thursday.

The ministry ruled out that they were super spreaders and said their families remained safe.

The ministry says it is trying to prevent Thailand entering the third phase of the outbreak, marked by mass infections. But Dr Thiravat argued that the country is already in the third stage.

"The fact is, we are already in the third phase. But we do not have a large number of patients in serious condition who need to be treated in an ICU," he said.

WASHINGTON - The US Congress on Thursday passed landmark legislation to protect same-sex marriage under federal law, and President Joe Biden has vowed to quickly sign the measure.

ROME - Pope Francis was unable to hold back tears as he offered prayers for Ukraine Thursday during a traditional ceremony in central Rome.

DOHA - Brazil were gearing up for a showdown with Croatia while Argentina prepared to face the Netherlands as anticipation mounted on Thursday on the eve the World Cup quarter-finals.