Broken but not shattered
Thailand
General

Broken but not shattered

The band forms an integral part of the performance through musical arrangements. (Photos by Dhamma Theatre Foundation)

'Don't be naughty, otherwise the police will come and get you!"

"If you go out at night, geckoes will eat your liver!"

"If you get good marks on your test, I'll buy you a new phone."

So many people have heard these words from their parents, past and present. They are just an easy way to keep kids in line, through threats, scare tactics or material rewards. It's much easier for parents who have no time for their kids, simply because they are too busy earning a living to put food on the table.

School is no better, with punishment rather than encouragement being the norm. "If you do that again, you're going to be expelled!"

That's what The Broken Violin is all about. The Broken Violin is a new style of theatre performance that combines acting, music and skateboarding, produced by National Artist Patravadi Mejudhon, or Khru Lek, in conjunction with the Dhamma Theatre Foundation under Patronage of the Supreme Patriarch. It is aimed at putting up a mirror to all parents who are not aware that time and understanding are what kids need more than anything else. Lack of communication is more or less the cause of delinquency and juvenile crime -- the broken violins, so to speak.

It started in February 2019 when Khru Lek visited a group of youngsters at their hangout under Bhumibol Bridge. A few were into skateboarding, but weren't allowed in Lat Pho public park for fear of endangering the children there. It was clear that kids in communities like that had nowhere to play, and nothing to occupy their minds and energy. Skateboarding was a sporting activity that fitted the bill: it focused the mind, used up energy, and did not require several players. 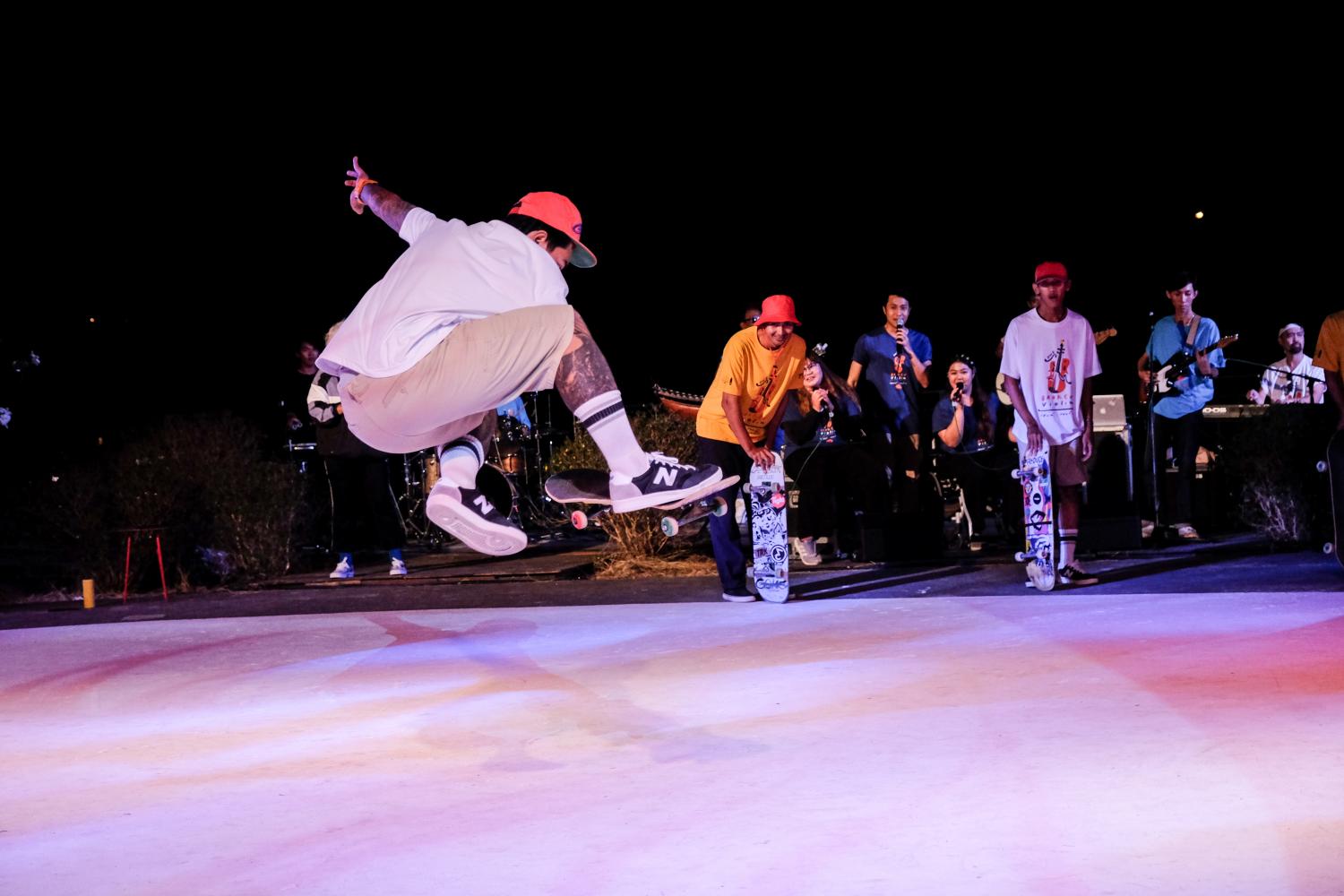 'Petch' with the full body tattoo shows off some skateboarding tricks.

Enter Chakarin Petchworaphon, a former member of the Thai national skateboard team, introduced the youngsters to proper technique. With proper balance and a firm footing, they gain stability on the skateboard, and also in life.

The concept of the broken violin came from Kyle Dillingham, an American violinist with a passion for skateboarding. Before arriving in Thailand, he had created an album called Broken Beyond Repair, referring to a box of broken violins in a junk pile. He found that they could actually still be played, with a strained, yet somehow uniquely beautiful sound.

These kids were like the broken violins -- damaged and discarded, yet still capable of fulfilling their purpose in life, if only someone would give them a chance.

The real stories of the youngsters themselves -- youth from Ban Kanchanapisek Vocational Juvenile Training Centre for Boys run by child rights activist Ticha Na Nakorn, and Phetchahueng 44 Community Centre -- became the script of the performance. 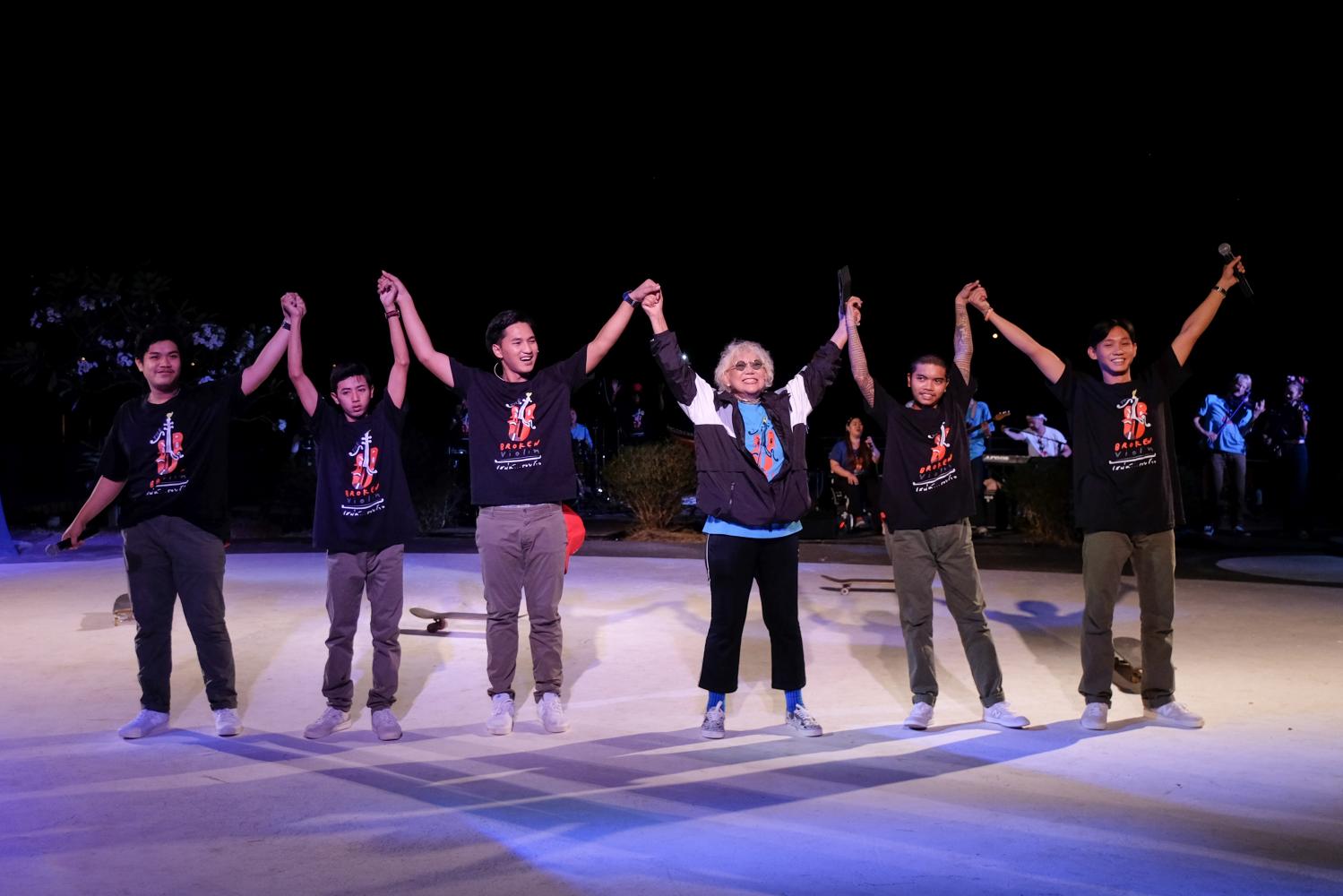 A curtain call for an appreciative audience.

With some basic training in diction, acting, movement and music, in addition to some lessons in manners, etiquette, respect for others and rational thinking, they were soon reliving their own life stories, set against a selection of well-known songs that helped weave the story threads together, rearranged to reflect the emotional levels as the stories unfolded. The song Itsy Bitsy Spider reflected young kids in their innocent state, but as their frustrations set in and the world became harsh, this nursery rhyme took on heavy rock tones reflecting a sense of chaos and revolt.

Relationships gone sour are also detrimental to youngsters with raging testosterone and no one to turn to. The song Nok Khamin, with its haunting flute and vocals, relates beautifully this sense of despair that later takes on a dark side as the electric guitar and drums take over. The youngsters eventually find their role models in the streets, in the form of gang leaders who sell drugs, have money, power and girls.

"I had a mentor, an older guy with tattoos all over his body, dealt drugs. I wanted to be cool, like him. So I tried to do everything like him. But I got arrested."

This line is vividly delivered by Thosawat Chandaphol, or Oh, whose prep schoolboy good looks belie his record for drug offences that ensure he will remain at Ban Kanchanapisek for another few years. 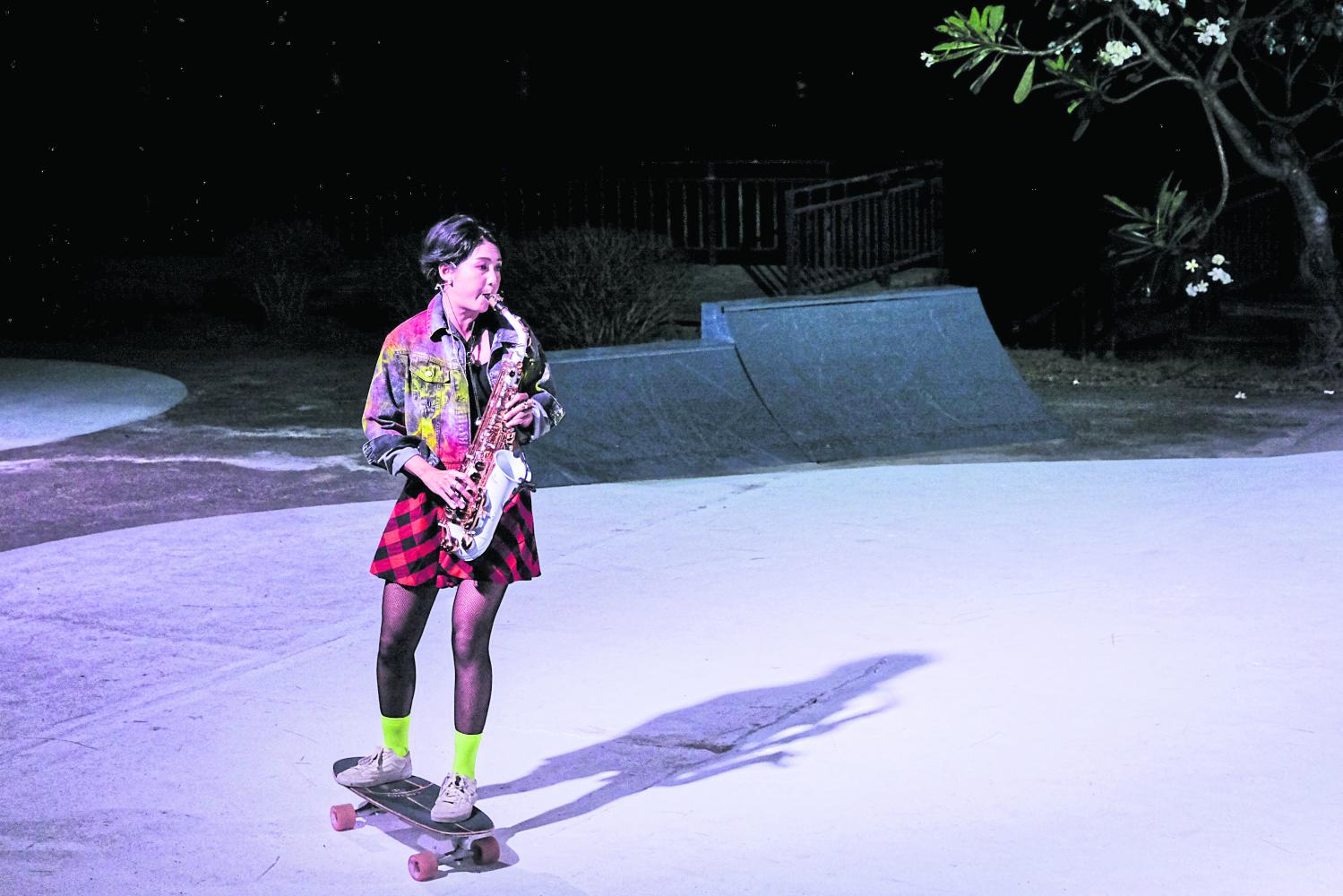 Girls can play sax and skateboard at the same time!

Thanawat Chitthititham, or Petch (Diamond), is one of the skateboarders with all the threatening characteristics you would tell your kids to avoid -- dark and unshaven, full body tattoo from the neck down, tattoos on his forehead (reading "We Love the King" if you dare get close enough to read it), a diamond on his cheekbone, scissors down his sideburn, and a large tunnel earrings.

Yet it was Petch, a former addict, who offered up his rundown house in Soi Phetchahueng 44, formerly a place for shady drug deals, for public use. The youngsters in the team helped clear the yard of the weeds and rubbish, laid cement and created a skateboard park complete with ramps. The house was painted in bright pastels, and a vegetable plot planted in the back.

And with Khru Lek's assistance, Petch learned how to cut hair at a reputable salon, and set up his own barber shop on the front porch. Now named Phetchahueng 44 Community Centre, Petch's house became the playground for kids in the community who previously had nowhere to go. They were also taught how to make grilled chicken on skewers to sell in the community to generate income.

The "broken violins" have been making their own unique music since the show began in February this year, joined by professional artists such as singer and actress Narinthorn Na Bangchang who gave voice training lessons and takes on the role of Narrator, her father rock guitarist Chor-On Na Bangchang who trained the young guitarists, and performance artist Wannasak Sirilar who took backstage and costume responsibilities.

There is light and redemption at the end of the tunnel, and broken violins can still make beautiful music, as reaffirmed by the song Live and Learn which rounds off the show. 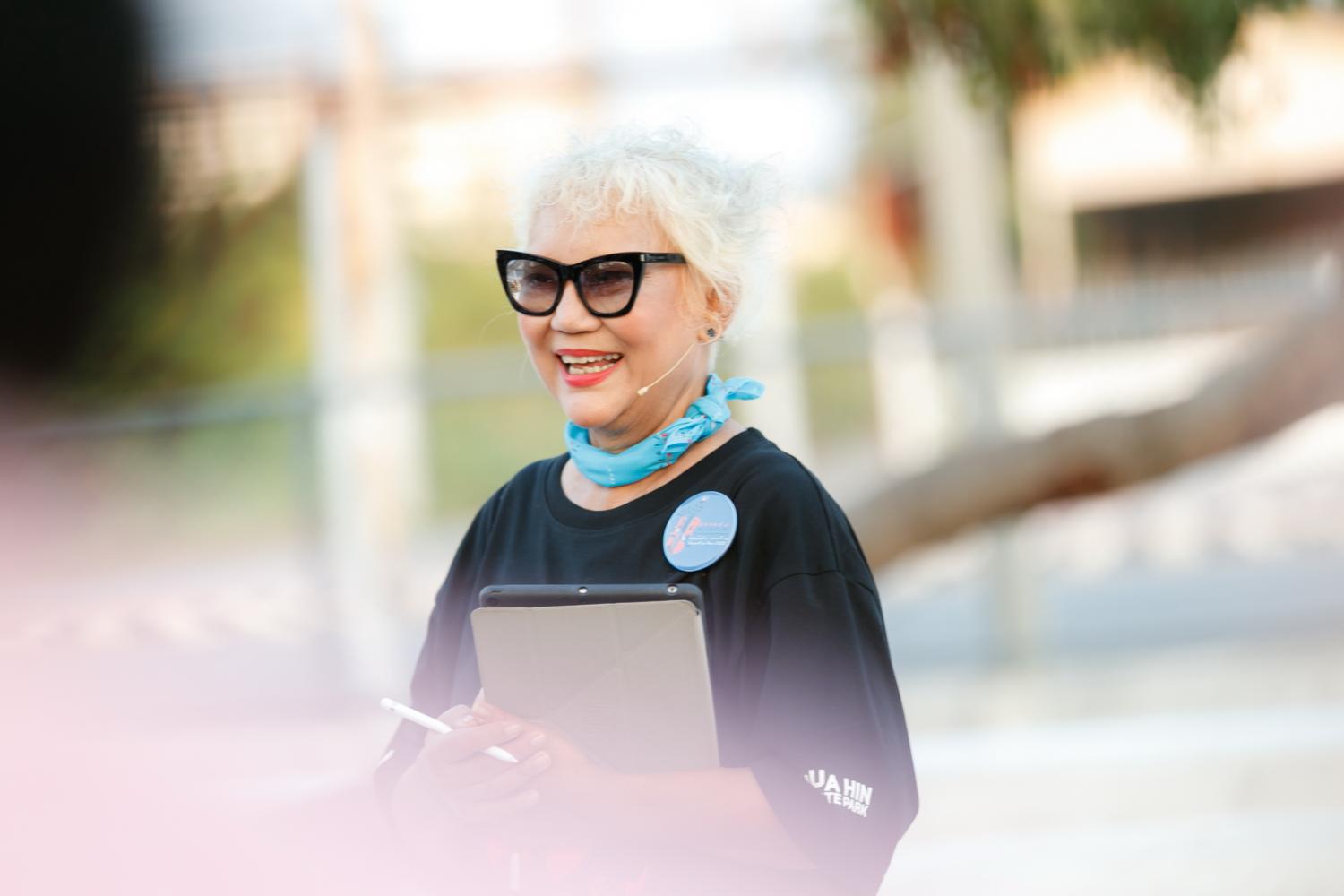 The young actors and musicians have all gained much from this experience. Petch summed it up beautifully. "People used to see us as 'underground', dark, noisy. We were living from day to day without direction. But now, we are beginning to think of the future, of our family, of earning a living, and getting away from that vicious cycle that we had fallen into."

"Thank you for providing us with this white space, and allowing us to shine with a sense of value," said another cast member.

"The results have been so much more than I had expected," expressed Khru Lek, who initiated the project as a personal research into art therapy.

"Adults in the production team came up to me to say the show had given them food for thought, and they changed their attitude towards their own children, bringing them closer together. They have each adjusted in their roles as parents, as children".

It wasn't just the show that made a difference, it was the entire process that began a year ago. Most significantly, the cast have gained a sense of self-respect, direction and purpose in life that ensure they will no longer want to go down the dark path again. And all this was done without anyone telling them they were not allowed to touch drugs.

The planned touring performances have been temporarily put on hold, but will resume in May at various schools in Bangkok. To ensure the show maintains its momentum and reaches a wider audience, Khru Lek plans to record it in video form that can be watched online. There are also plans to produce a similar show in Chiang Mai featuring northern dialect and music. 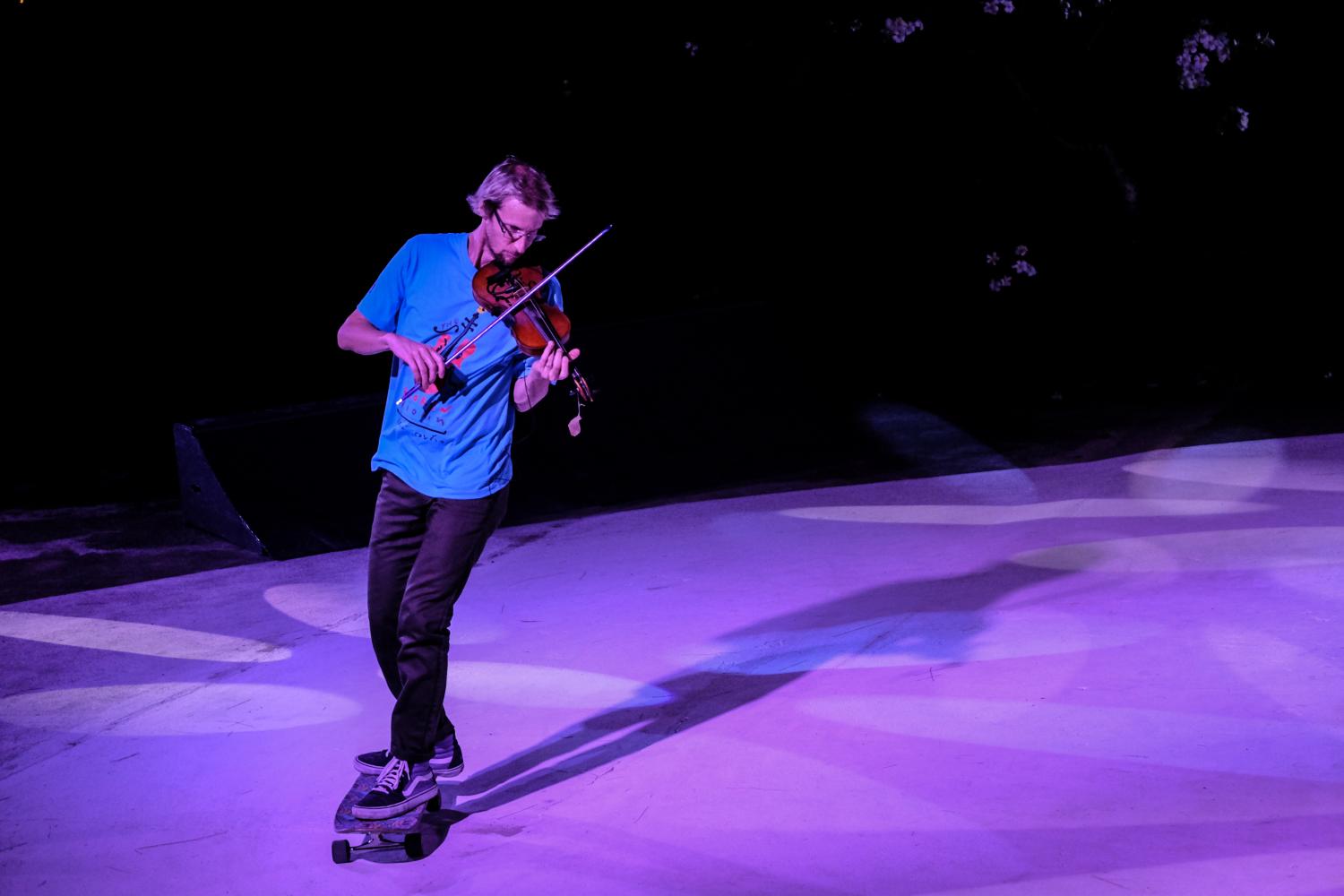 US violinist Kyle Dillingham, whose broken violin concept forms the basis of the show. 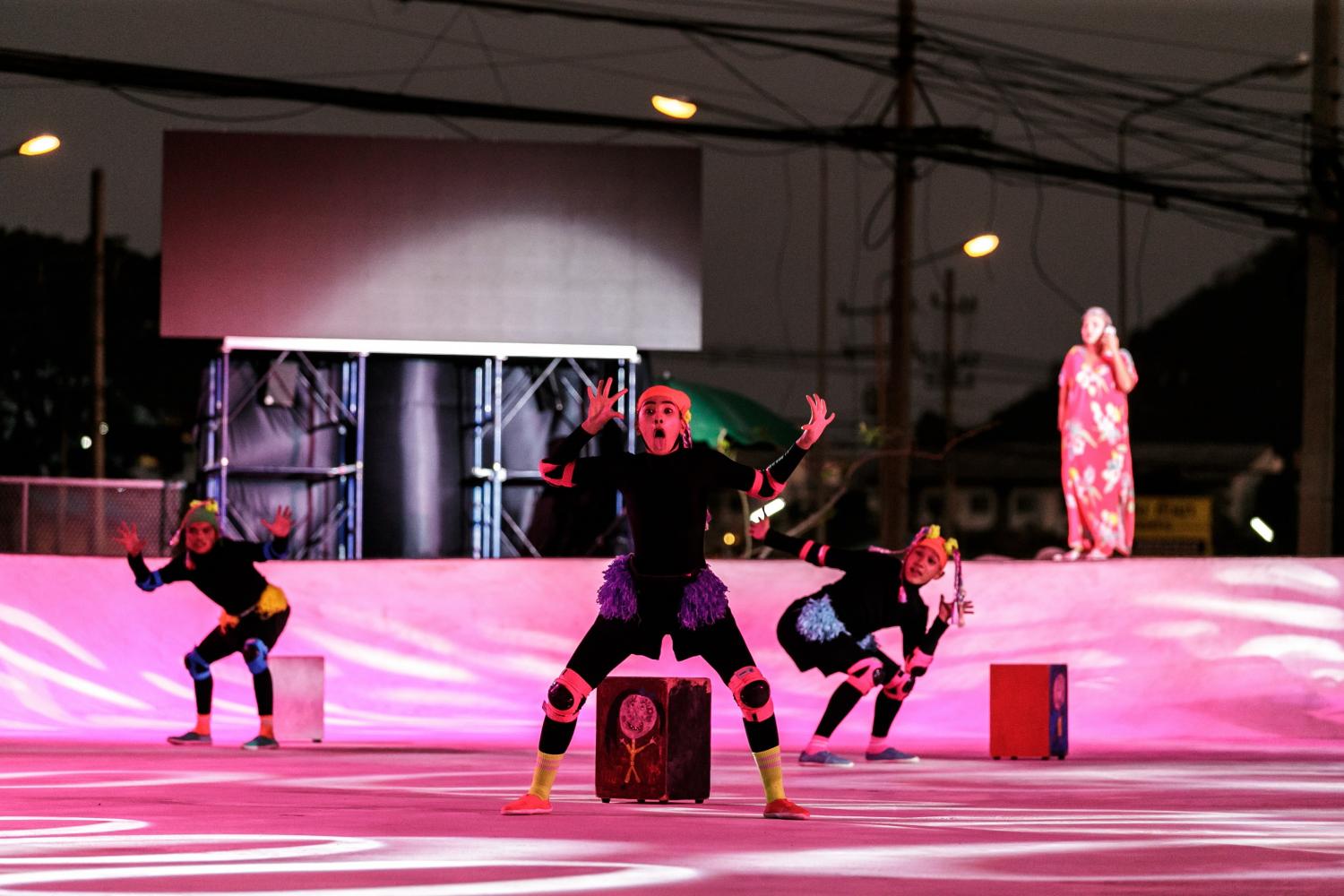 The cast show how innocent childhood is transformed into aggression and rebellion through lack of communication between adults and kids, with narrator Narinthorn Na Bangchang in the background. 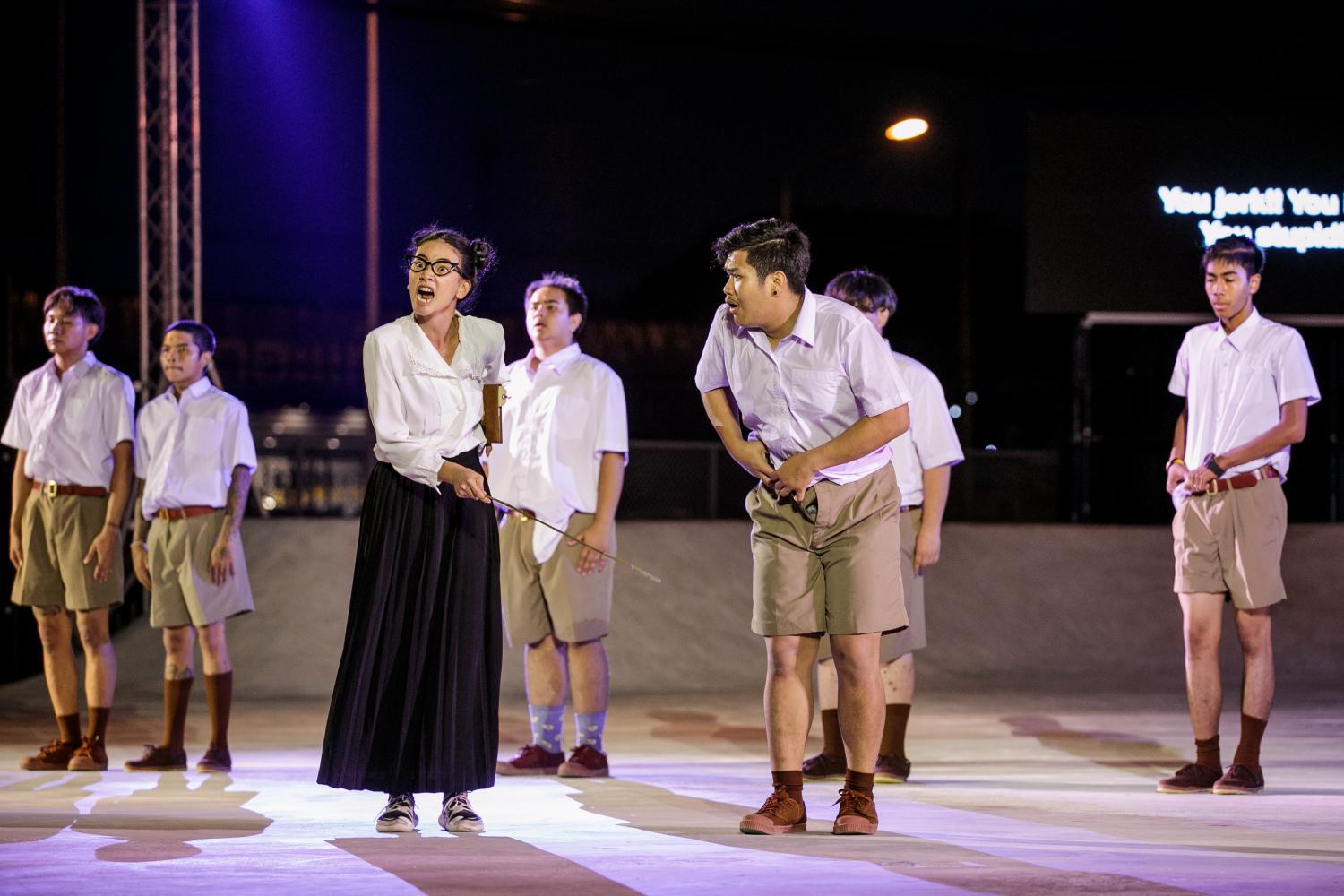 Punishment is the norm at school for dealing with unruly children. 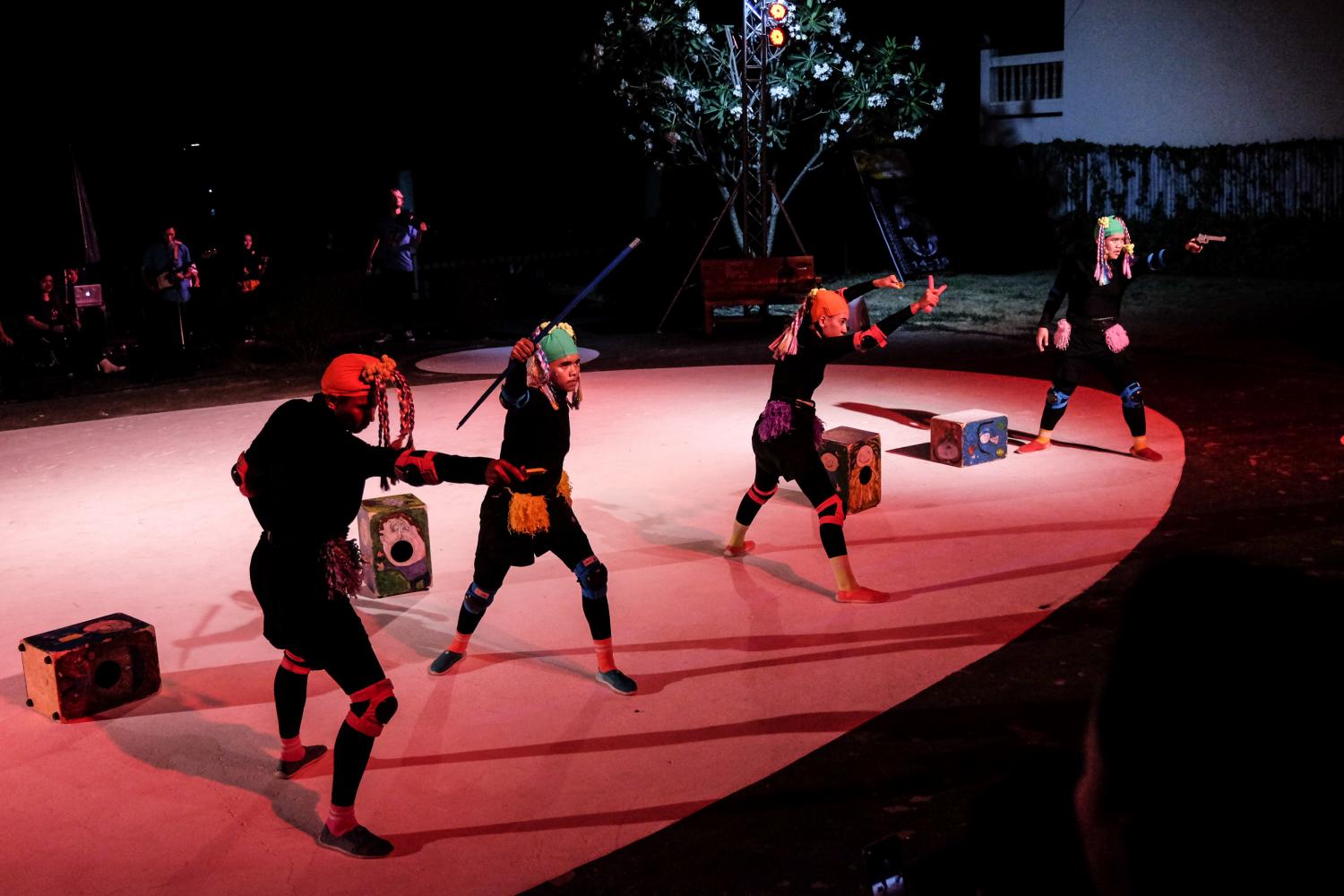 The cast shows how young innocent childhood is transformed into aggression and rebellion through lack of communication between adults and children, with narrator Narinthorn Na Bangchang in the background. 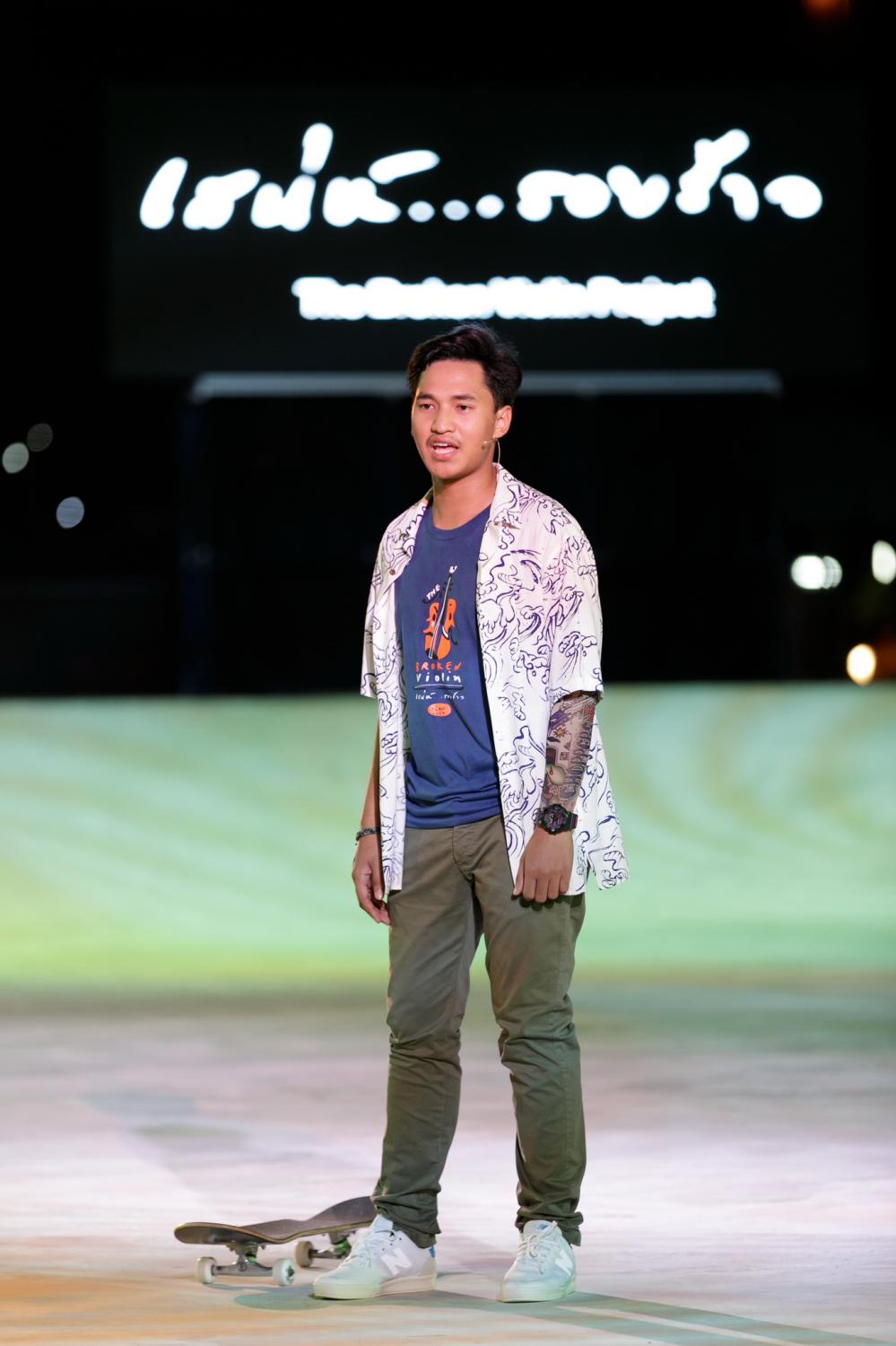 Telling his own life story of how he made the wrong life choices is Om. 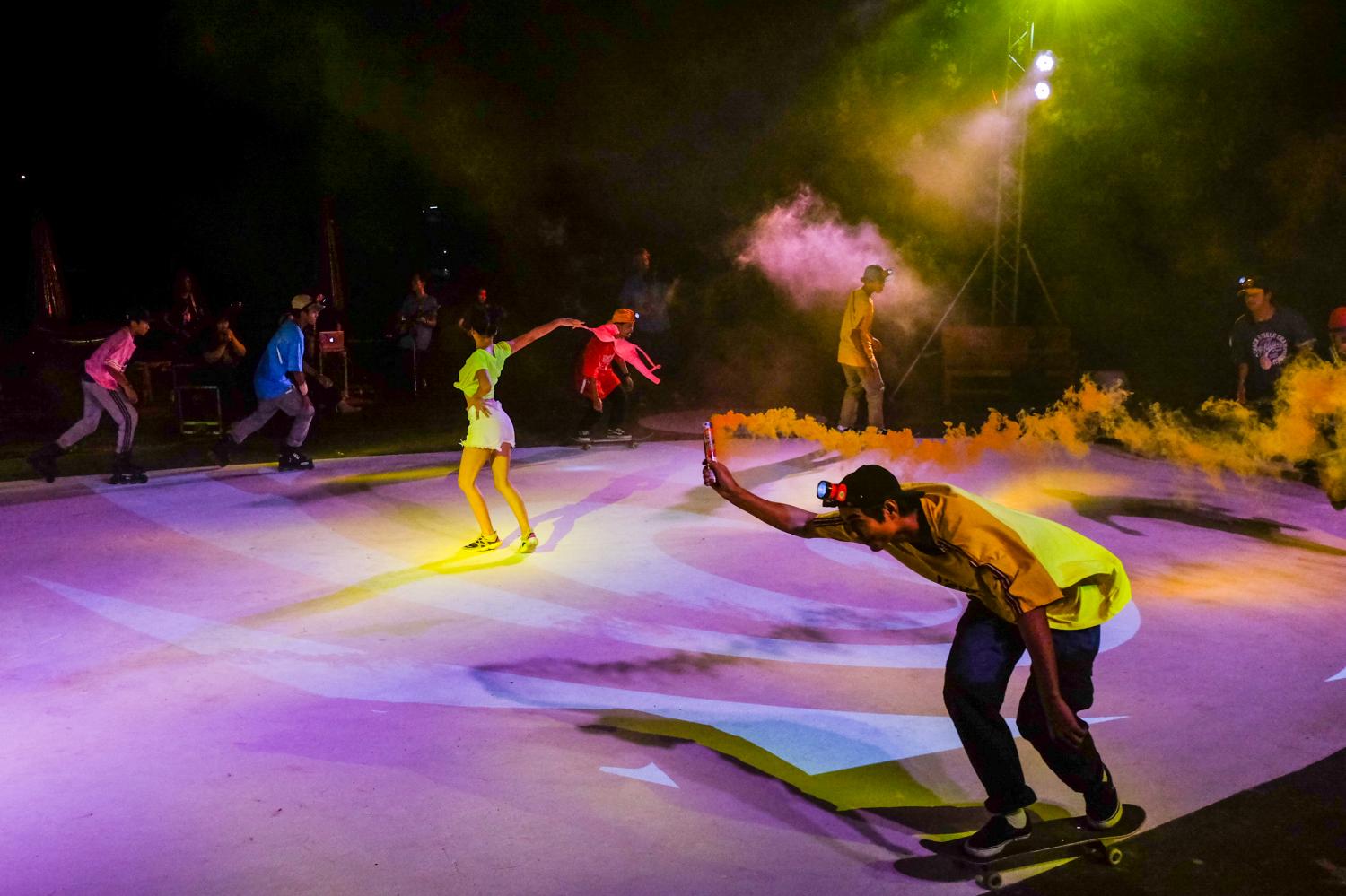 8. Girls and fast bikes — symbolised by skateboarders carrying smoke throwers — are part of growing up. How do you deal with them? 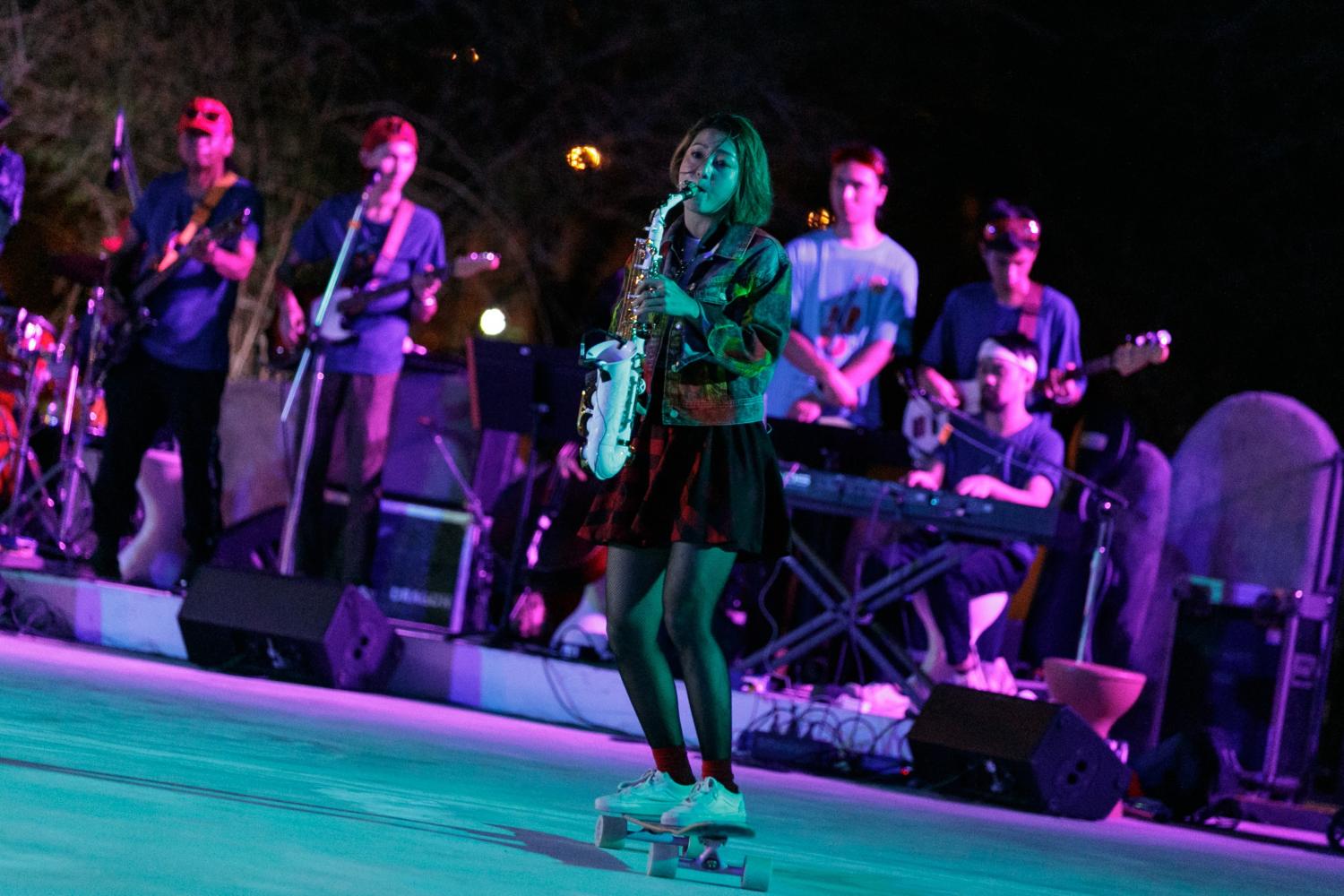 9/10. Girls can also play saxophone, and skateboard at the same time!

The cabinet on Wednesday approved two long-weekend holidays, one in November and the other in December, proposed by the Ministry of Tourism and Sports to spur the economy.

SINGAPORE: The Monetary Authority of Singapore (MAS) said on Tuesday that it was 'closely studying' media reports that Singapore banks had informed US regulators of suspicious transactions.

The Metropolitan Police Bureau is preparing multiple charges against 16 leaders of the anti-government demonstration in Bangkok last weekend.