People flock to a Makro branch in Bangkok's Bang Bon district to buy food and other necessities amid escalating concerns over further spread of the novel coronavirus. (Photo by Arnun Chonmahatrakool)

Prime Minister Prayut Chan-o-cha on Sunday appealed for calm as escalating fears over Covid-19 are driving people to stockpile food and other daily necessities.

"We are not at a stage where we need to stockpile food," Gen Prayut said after a meeting to address the growing spread of the coronavirus in the country. Foods such as instant noodles, sauces and canned food have disappeared from the shelves in many supermarkets as many shoppers seek to plan for shortages.

The prime minister said additional measures are being implemented, including mobile applications created to monitor the situation. Airports of Thailand Plc has an app for arrivals to contact the government if they suspect they are infected with the virus. Innovators have created an online map to update the virus situation in the country.

Gen Prayut said he called the meeting of the centre to fight the virus on Sunday to bolster public confidence and find measures to solve problems ranging from mask shortages to monitoring systems.

Thailand reported 32 new virus cases on Sunday, bringing the total above the 100-mark -- to 114 -- for the first time, amid a warning from doctors that the country was moving to the "third phase" of mass infections. 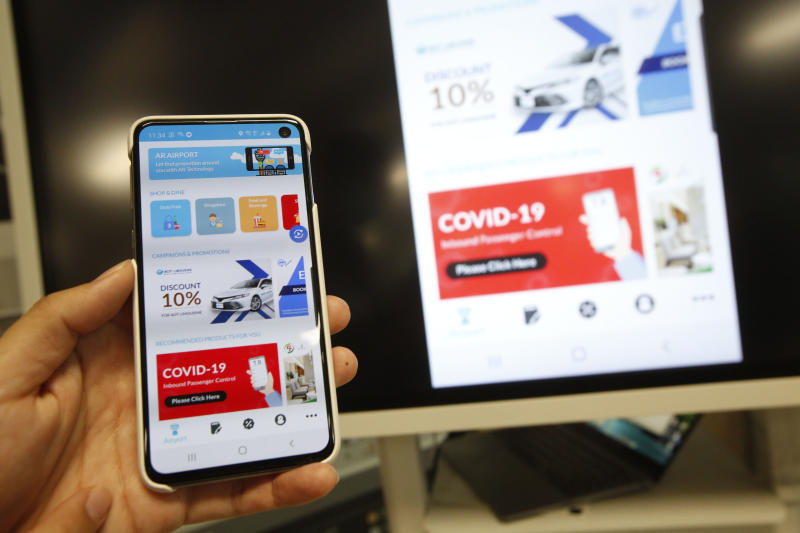 A Covid-19 app for travellers entering Thailand to contact officials if they are show symptoms of virus infection is demonstrated at Suvarnabhumi airport on Thursday. (Photo by Pornprom Satrabhaya)

Gen Prayut signed an order to transfer Internal Trade Department director-general Vichai Pohanakit to his office after the agency had failed to tackle the mask shortages and inflated prices.

The government plans to use a newly-built hospital -- which he did not name -- to specifically handle virus cases, and will add the Covid-19 disease to the emergency list for patients under the universal healthcare scheme. The inclusion will allow people infected with the virus to be treated at the nearest private or public hospitals for 72 hours, instead of going to the hospital they have previously registered with under the programme.

Public Health Minister Anutin Charnvirakul is considering shutting down all entertainment venues to contain the outbreak in the wake of cluster infections involving people drinking together in pubs last month.

Gen Prayut said on Sunday the government will seek cooperation from entertainment venue operators in high-risk areas to close -- and did not rule out the possibility of shutting all of them if necessary.