Pattaya City municipality officials posted a demolition order in front of one of the buildings at Sukhawadee House, or Baan Sukhawadee, a luxury beachfront mansion and tourist attraction in Pattaya, Chon Buri, for encroaching on public land. (Photo by Chaiyot Pupattanapong)

CHON BURI: The Pattaya City municipality has given the owner of Sukhawadee House, a luxury beachfront mansion and tourist attraction in Pattaya, 15 days to demolish a large building in the compound for encroachment on public land after a provincial committee turned down its appeal.

Pattaya City municipality deputy clerk Kiarttisak Sriwongchai  on Wednesday led a team of municipal officials to affix the Chon Buri provincial panel’s appeal result and the Pattaya municipality’s announcement in front of Building A in the compound of Baan Sukhawadee, or Sukhawadee House, in tambon Na Klua of  Chon Buri’s Bang Lamung district.

Building A was built on an 11-rai plot reclaimed from the sea. It forms part of the 80-rai plot on which Sukhwadee House stands.

The municipality earlier ordered the demolition of Building A and two other buildings -- Building B and Building C -- at Sukhawadee House after one of the buildings was found to be encroaching on public land and the two others were built without permission.

Health Food International (Thailand) Co had appealed to the Chon Buri provincial panel against the Pattaya City municipality’s demolition order, claiming it was unlawful and unjust. The firm argued the land on which one of its buildings was built was not public land as alleged, but was part of its land plot issued with a land title deed. The building was built on the land, which was formed through natural processes. Thus, the firm had the right over the land. It had applied for a title deed for the extra land with the provincial land office.  The two other buildings could be altered.

However, the provincial panel rejected the appeal on the grounds that the appeal letter did not have the stamp of the company, although it was signed by two women who were committee members of the firm.

Mr Kiarttisak said the municipality posted the demolition order after the official results of the appeal came out. 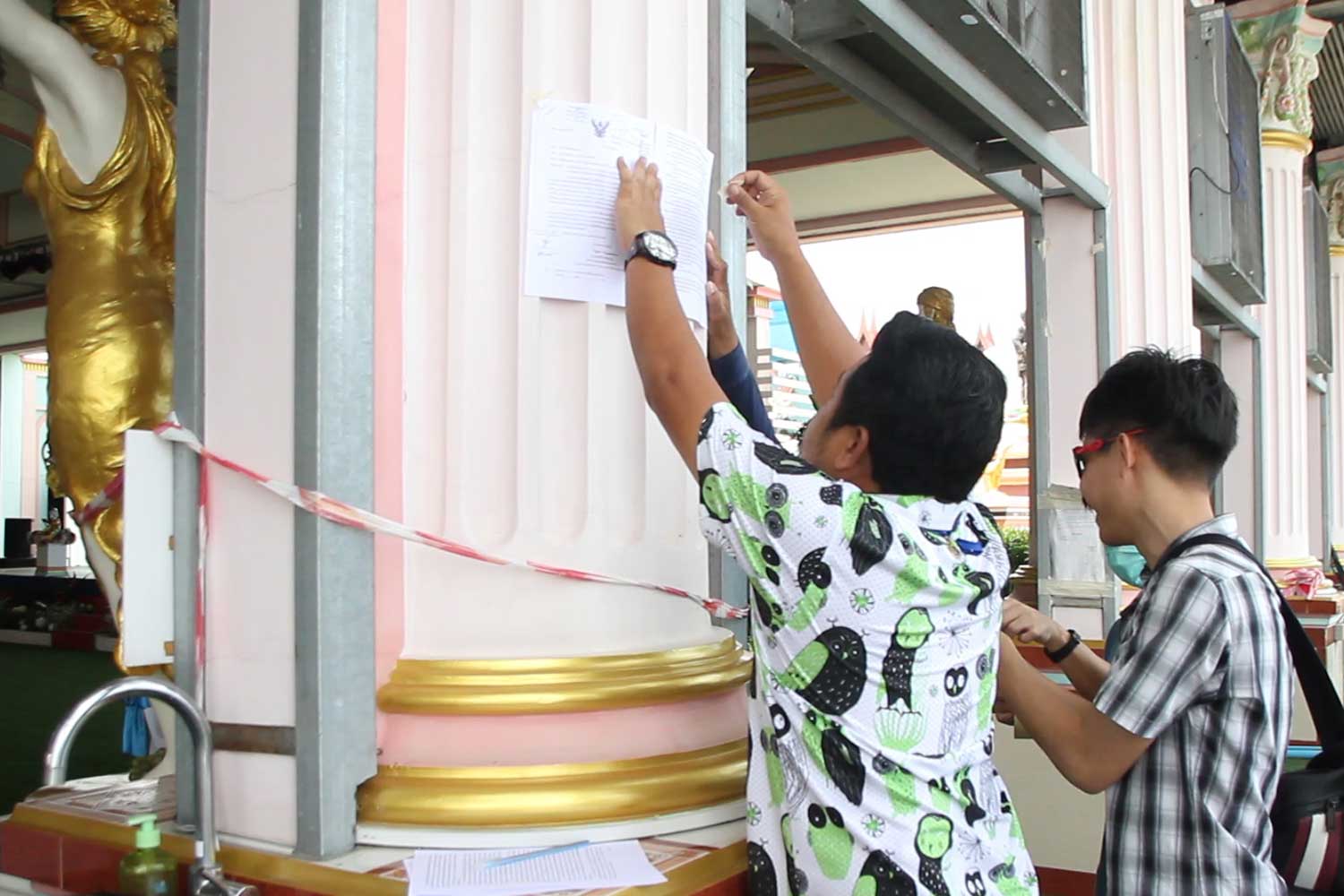 An official posts the Pattaya City municipality's demolition order on the concrete pillar of a large building at Sukhawadee House in Pattaya on Wednesday.(Photo by Chaiyot Pupattanapong)

Building A was a large two-storey building and must be demolished within 15 days after the demolition order was put up, said the deputy city clerk.

If the firm did not appeal the Administrative Court decision and there was no court injunction, the municipality would demolish the building itself, he said.

The 11-rai land plot on which Building A stands would be cordoned off before heavy machinery and workers were deployed.

Building B and Building C were built without permission, he said. They were different from Building A, which was built on public land, he added.

Pattaya mayor Sonthaya Khunpluem signed the demolition order for Building A, which must be demolished within 15 days.

Mr Kiarttisak said the municipality was not worried if the operator of Sukhawadee House turned to the Administrative Court to seek justice or ask for a court injunction. The municipality has sufficient evidence about the land encroachment, including aerial images, a cadastral survey and a cadastral map.

The Sukhawadee estate is owned by Panya Chotitawan, owner of Saha Farms Co Ltd, one of the country's largest frozen poultry exporters. 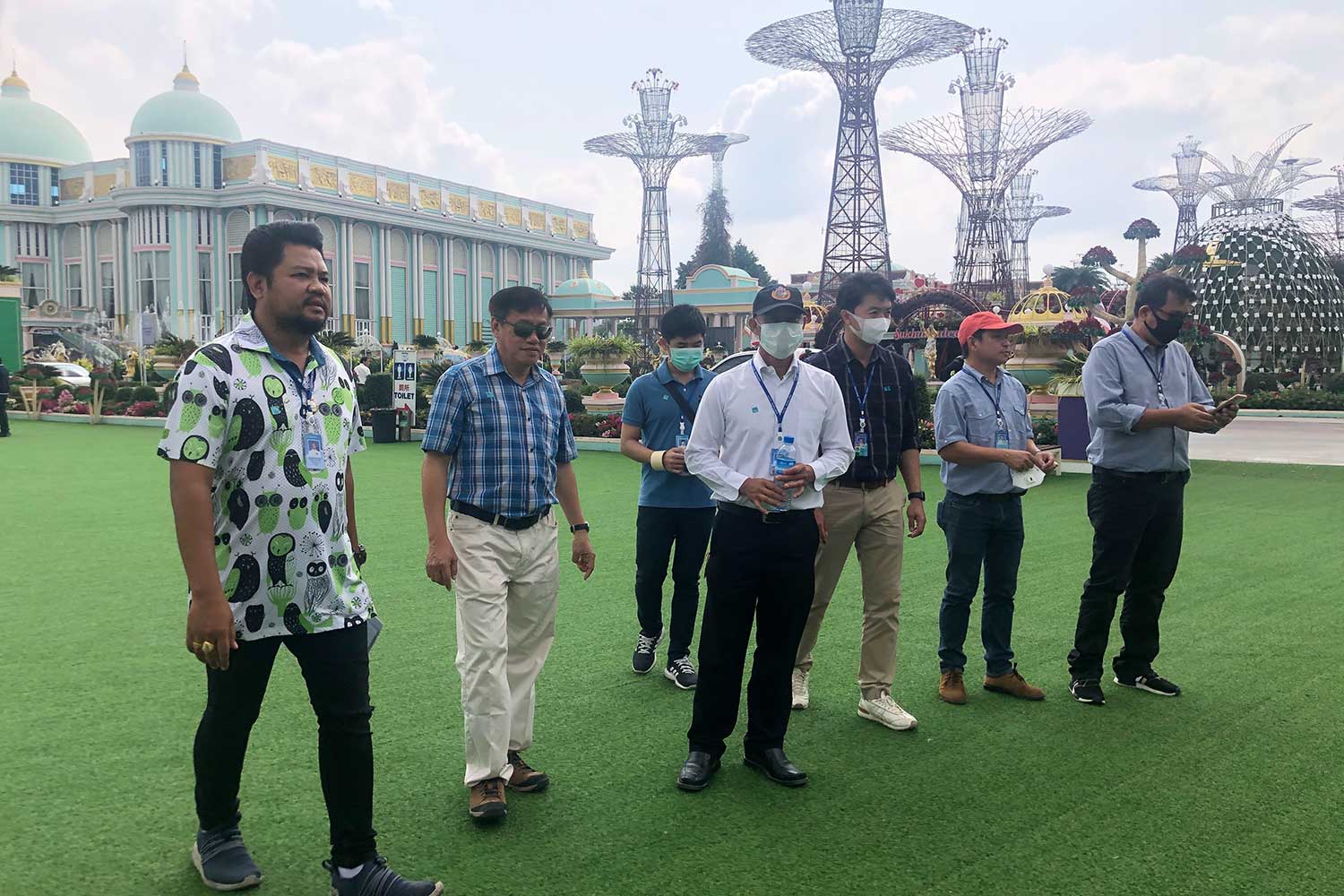