Mass exodus may cause Covid-19 numbers to soar
Thailand
General

Mass exodus may cause Covid-19 numbers to soar

Travellers wait to board their buses at the crowded Mor Chit bus terminal in Bangkok on Tuesday. (Photo by Nutthawat Wicheanbut)

A medical expert has predicted that Thailand could have 2,000 new Covid-19 cases in the next couple of weeks as a result of people fleeing Bangkok for their home provinces in the wake of the partial lockdown and invocation of the Emergency Decree.

Dr Prasit Watanapa, dean of the Faculty of Medicine at Siriraj Hospital, Mahidol University, said on Friday said that new infections may surge in the next two weeks due to the exodus. He said that despite wearing face masks, they are still at the risk of spreading the virus and getting infected as they flock to bus terminals and are packed together on buses for several hours, Dr Prasit said.

"By that time, Thailand may not have enough medical personnel. Currently, the ratio in Bangkok is one doctor to 800 patients. But in other provinces, especially the Northeast, one doctor will be taking care of up to 3,000 patients, not to mention the lack of medical supplies. Subsequently, death rates along with the number of patients could rise significantly," Dr Prasit said.

Meanwhile, the Interior Ministry has proposed tougher measures to control the spread of Covid-19 in Bangkok and provinces where infection rates are high, including the three southernmost provinces.

The proposal was raised by Chatchai Promlert, permanent secretary for Interior, at a meeting of the Covid-19 Administration Centre chaired by Prime Minister Prayut Chan-o-cha, the centre's spokesman Taweesin Visanuyothin said. 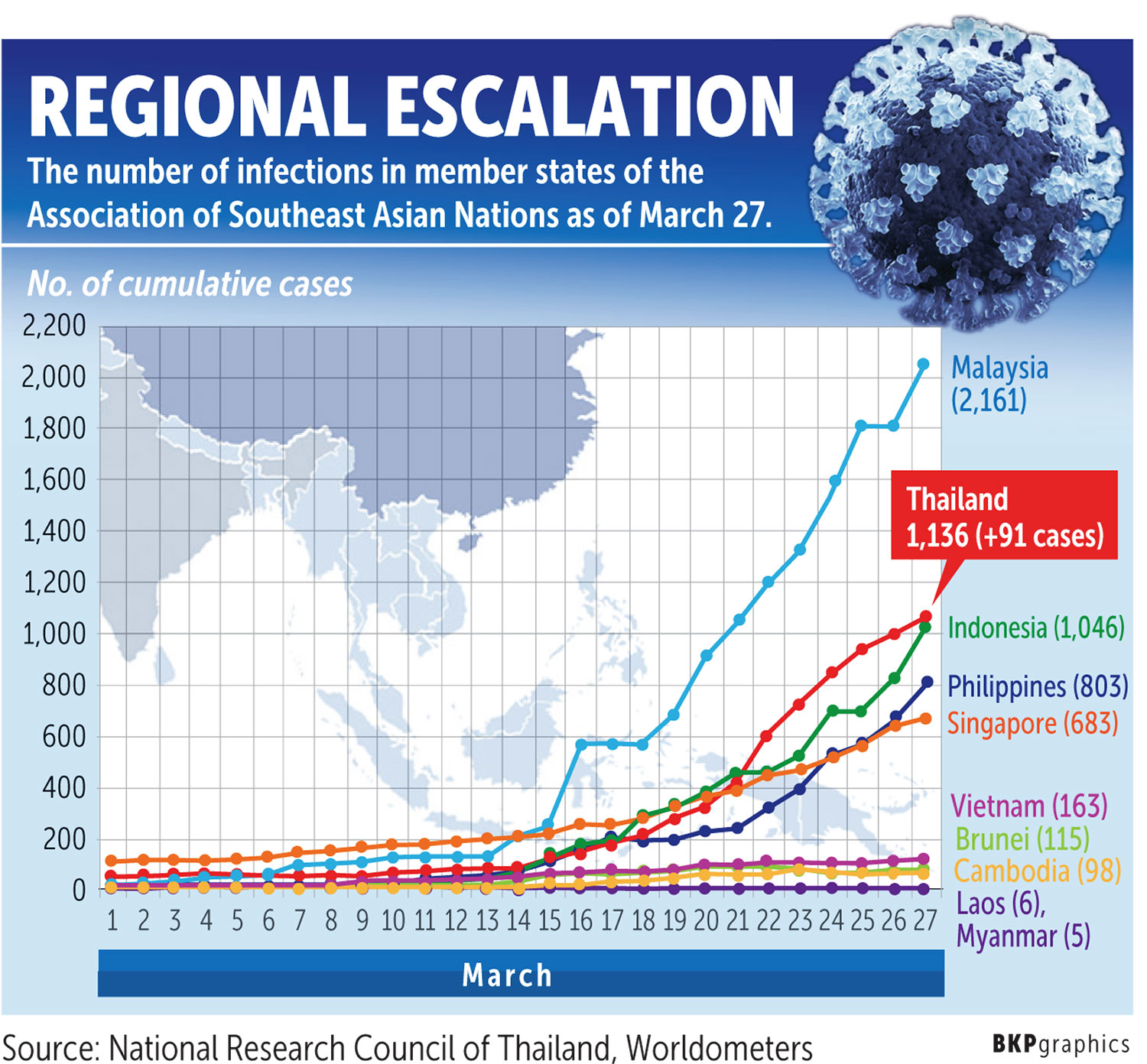 Mr Chatchai suggested that control measures be stepped up in provinces that have a large number of Covid-19 patients and there is still a high risk of more infections, particularly in Bangkok and the adjacent provinces of Chon Buri, Rayong and Ubon Ratchathani, Dr Taweesin said. He added that special emphasis will also be placed on Songkhla, Pattani, Yala, Narathiwat and Phuket.

However, he said, it will be up to each provincial governor to decide what action will be taken in line with the Public Health Ministry's guidelines, Dr Taweesin said, adding "the meeting did not discuss a curfew".

Meanwhile, City Hall has ordered the closure of more places in Bangkok from on Saturday until April 30, including racing venues, playgrounds at public parks and housing estates, libraries, museums as well as theatres and outdoor cinemas.

City Hall spokesman Pol Capt Pongsakorn Kwanmuang said venues for events and meetings, snooker halls and beauty clinics will also be closed. From Tuesday, public and private nurseries, except those in hospitals, will also be shuttered.

Separately, the Public Health Ministry on Friday reported one more death from Covid-19, bringing the fatalities to five, while 91 new cases were found in 52 provinces, raising the total to 1,136. This is the first time that the number of new cases has dipped below 100 since March 22, which saw the highest number of new infections at 188, followed by 122, 106, 107, and 111 respectively in the following days.

Of the total 1,136 patients, 1,034 were hospitalised, including 11 in critical condition and 97 who have recovered and been discharged, said Dr Anupong Suchariyakul, a specialist at the Disease Control Department.

The latest death was that of a 50-year-old Thai man from Narathiwat's Sungai Kolok district. He was hospitalised on March 11 after attending a religious ceremony in Malaysia.

Five more doctors and nurses in Bangkok's Taksin Hospital are believed to be at risk of contracting Covid-19 from patients as concerns mount over the 11 medical personnel infected so far.

Two doctors, one nurse and two nursing assistants were categorised as having a "high risk" of falling ill as a result of treating a patient, a senior city official, who requested anonymity told the Bangkok Post on Friday.

The patient was admitted to the hospital on Tuesday and initially stayed in a common room for two hours before being relocated to a separate room after testing positive.

The official said the time the patient spent in the common room might have led to the transmission of the virus. "Despite medical staff wearing protective gear and working in safe environments, it is still safer to place any at-risk person under a 14-day quarantine."

Taksin is one of the five City Hall-led hospitals designated to treat Covid-19 patients.