Lampang governor Narongsak Osottanakorn (left) makes sure all entertainment venues are closed during the battle to save the province from Covid-19. (Photo by Assawin Wongnorkaew)

LAMPANG: Residents in this northern province have taken to social media in praise of their governor for his well-planned fight against the coronavirus. No infections have yet been reported anywhere in Lampang.

"The success so far is because of trust and confidence in him to move the plan forward in one direction," a user named Ungde Amin commented on the Lampang13 Facebook page that posted an interview with governor Narongsak Osottanakorn on Sunday.

"He shows leadership and the measures are well prepared," Pun Pun wrote.

Mr Narongsak was known for his decisive command of the international operation to rescue 12 young footballers and their coach trapped inside the Tham Luang cave in Mae Sai district two years ago, when he was the governor of Chiang Rai. He was later transferred to Phayao and then Lampang.

Rescuers and others who participated in the cave operation in Chiang Rai have commended him for clear directions, decisiveness and leadership, saying he effectively coordinated all the units from various agencies under his command.

The country has recorded 1,651 coronavirus cases in 61 provinces as of Tuesday, but Lampang is not one of them.

The Provincial Public Health Office in Lampang on Tuesday denied reports on social media that one person in the province had been infected with Covid-19.

Mr Narongsak called an informal meeting with all officials in the province on Jan 23 when the Chinese government decided to lock down Wuhan, the epicentre of the virus at the time.

He said the lockdown of the Chinese city signalled the seriousness of the disease, and the province started preparing immediately.

"We closely monitored the situation in Wuhan," the governor said in the interview with local online media. 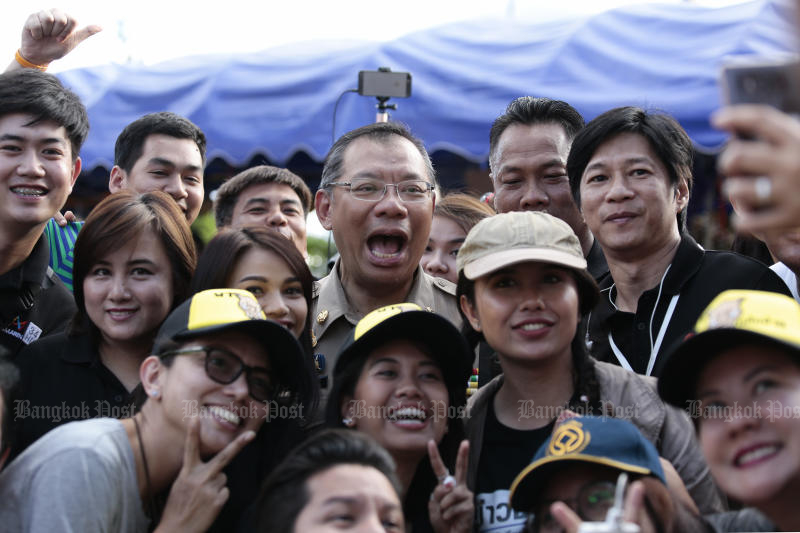 Reporters take photos with Tham Luang operation chief Narongsak Osottanakorn after the rescue of all 12 young footballers and his coach on July 11, 2018. (Photo by Patipat Janthong)

The province has prepared medical facilities for health personnel and patients, including 140 respirators and 10 negative pressure rooms. It has assigned 50 hospital beds for virus-infected patients and could  expand that number to 400.

"Health personnel are the most important group," he said. "If they fall ill, nobody will take care of people in the province."

The province has also made preparations in the field, recruiting health volunteers and villagers to respond to any outbreak in the province.

"We have designed the process to prepare for the situation and fine-tuned it with people on the ground," he said.

On March 18, the governor ordered all entertainment venues to close for 14 days in order to prevent virus transmission. Cooperation from all residents in the province was key to fight the virus, he said.

"People have to understand the situation. Some communities have told us that they will isolate themselves if one person is infected with the virus," he said.

The governor on Monday said he did not expect the province to remain virus-free but was confident that the preparations were adequate to take the local fight to the pandemic.

"We are confident our plan can cope with whatever happens," he said on the Facebook page of the Provincial Public Relations Office. "If we have only a few patients or none, it means people in this province can survive the crisis together."

Last year, when he attended the first anniversary of the Tham Luang Cave operation, he stressed the key to that success. "I want to remember the 18 days in which everyone displayed the power of cooperation,” he said.