All travel to nation halted for 2 weeks

Powered air-purify respirator (PAPR) helmets are being developed by Vajira Hospital's Faculty of Medicine for use among hospitals treating Covid-19 patients with critical conditions to better protect medical personnel against the virus. (Photo by Chanat Katanyu)

The government has imposed a curfew, banning all people nationwide from leaving their homes from 10pm to 4am starting tonight, in its latest move to contain the spread of coronavirus.

Appearing on the TV pool Thursday evening, Gen Prayut Chan-o-cha announced the curfew, effective until further notice. The prime minister called for calm and asked the public not to stock up on food as they will still be allowed to go out during the daytime, though they will be required to observe social distancing.

The travel of people to quarantine venues is also allowed.

Exemptions also apply to employees working night shifts, individuals heading to or from airports with necessary documents stating their purpose, officials carrying out official orders and those who have received prior permission from officials to leave for emergencies.

Existing curfew orders in other provinces with stricter requirements shall remain in effect, he said.

Gen Prayut added that outlets will be set up to distribute face masks.

"I won't let anyone hoard the products and take advantage of people during this difficult time," he said.

More economic stimulus packages will be introduced, which include financial aid, debt suspension and restructuring, and a liquidity boost.

In terms of disease mitigation, a centre will be set up to manage travel in and out of the kingdom with more strict screening, quarantine and monitoring measures.

In terms of communication, a briefing will be held every day at the government's Covid-19 centre.

Unauthorised people will not be allowed to give interviews, Gen Prayut said.

He again warned of the consequences of spreading fake news or sharing information from unknown sources, before urging everyone to cooperate for the ultimate goal of "zero infections".

Earlier in the day, Gen Prayut said the government will block all travel to Thailand including by Thais, starting today until April 15, to prepare quarantine facilities after more local cases were linked to "imported" cases.

He said the government needs time to prepare. 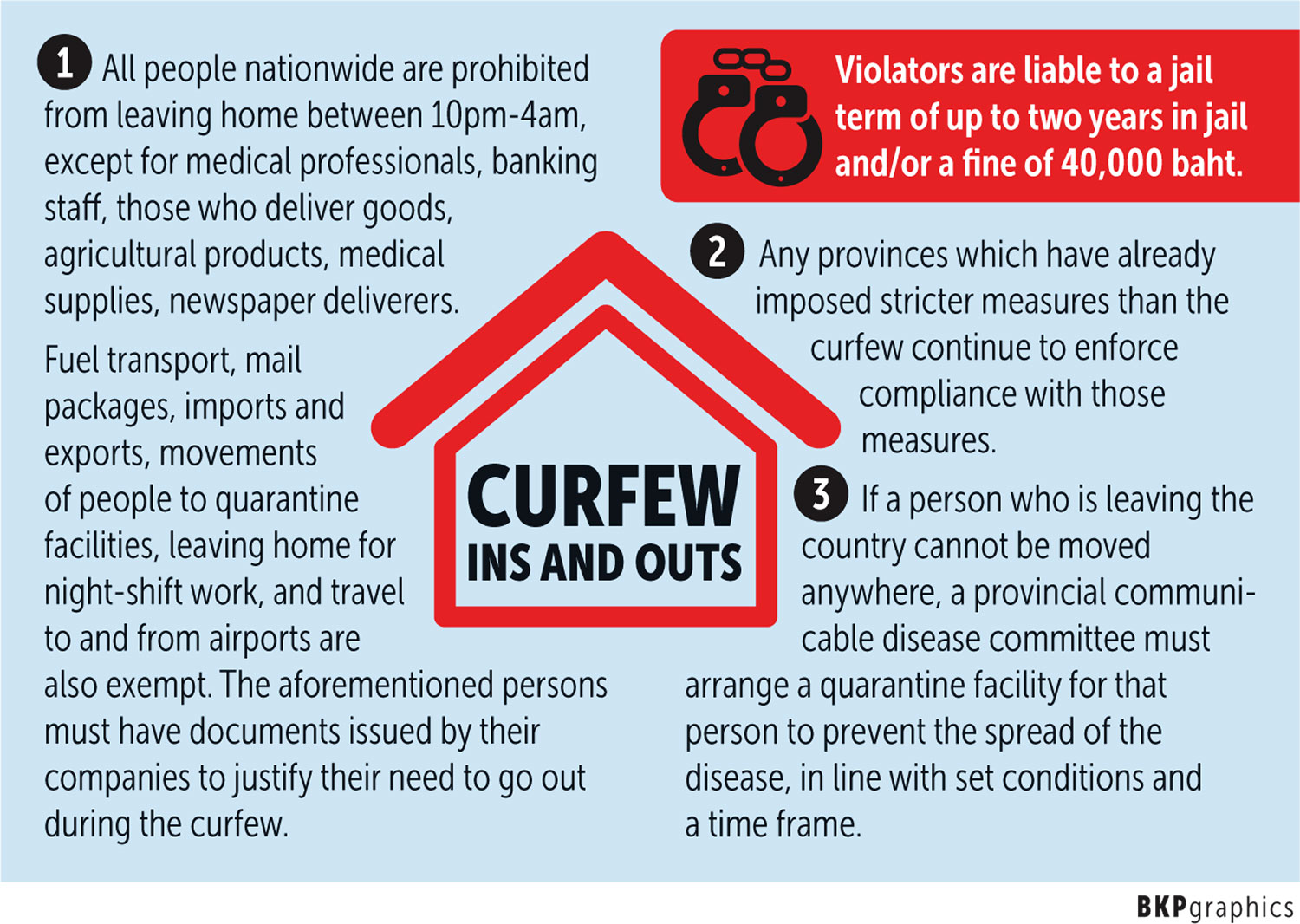 "In the meantime, agencies will prepare the venues and coordinate with Thai embassies to ensure all Thais returnees will be quarantined and get proper medical checks," he said.

Taweesin Visanuyothin, spokesman of the government's Centre for Covid-19 Situation Administration (CCSA), said on Thursday Gen Prayut told the officials at the centre that arrivals of foreigners and Thais from abroad will have to be slowed down "to stop the disease".

The new ban does not apply to people who already received permission to travel to Thailand, he said, before urging affected travellers to contact Thai embassies and follow their instructions.

Dr Taweesin said arrivals from abroad have proved to be a major source of infections.

Recent cases included an infected Thai man who had visited Pakistan and died on a South-bound train in Prachuap Khiri Khan province.

He also cited six Thais who returned from meetings in Italy, four of whom tested positive. The cases led to 50 other people being quarantined.

Out of the 132 Thais who attended a religious gathering in Malaysia, 47 contracted the disease, four died and about 1,000 others were quarantined.

Meanwhile, out of the 56 Thais who had attended a similar gathering in Indonesia, 32 were infected and about 500 were quarantined.

Four Thais who recently returned from the United Kingdom contracted the disease and one of them died.

This group included a patient who concealed his symptoms to return to the country, Dr Taweesin said. About 200 people were quarantined as a result.

Furthermore, 19 Thais crossing the border from Poipet, Cambodia were found to be infected and about 300 had to be quarantined.

The government on Thursday reported 104 new local cases of Covid-19 infections -- bringing the total number of confirmed cases to 1,875.

Three more deaths were also reported, raising the death toll from the novel coronavirus disease in Thailand to 15.