Stimulus to avert a repeat of 1997 crisis

The government has unveiled a fresh stimulus package worth 1.68 trillion baht, with plans to issue a set of executive decrees to implement the measure to cushion the blow from the coronavirus outbreak.

The latest stimulus package totals 10% of gross domestic product, and will be funded by new borrowing and reallocation of the existing budget. The package will be tabled for approval in a cabinet meeting on Tuesday, Deputy Prime Minister Somkid Jatusripitak said after a special cabinet meeting yesterday.

Mr Somkid said that at yesterday's meeting, it had been agreed in principle that three executive decrees will be issued to implement the stimulus package.

One of the decrees is to empower the Bank of Thailand to provide soft loans to help small- and medium-sized enterprises -- akin to what was done in 2012 after massive floods hit the country.

The package is intended to keep economic mechanisms running without disruption, said the deputy prime minister. 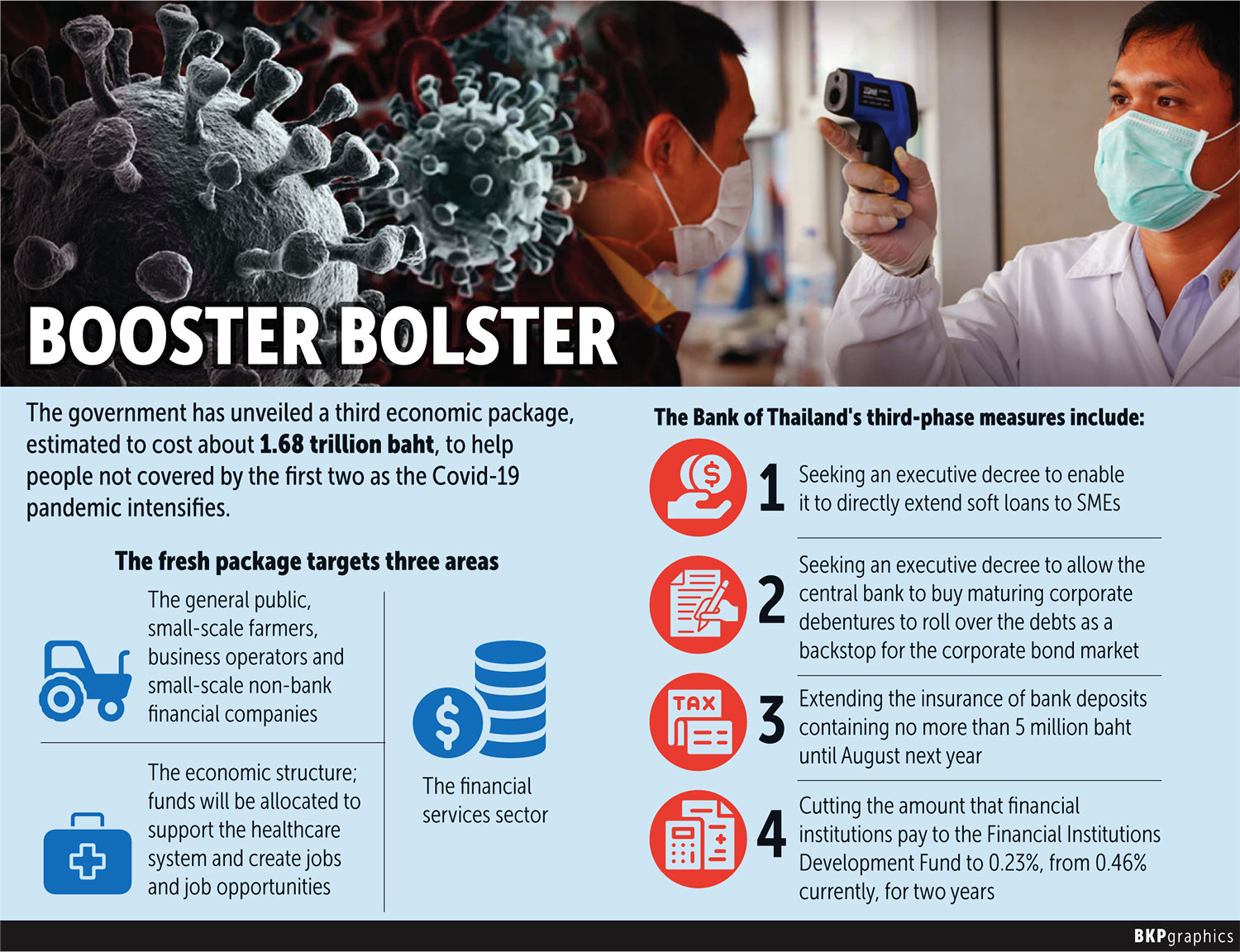 Mr Somkid added that funding sources for the package will not come from borrowing alone. This means the borrowing will be less than 10% of GDP.

According to the National Economic and Social Development Council, GDP in 2029 was 16.8 trillion baht.

Part of the money will also be drawn from 10% of budget allocations given to various ministries, with money earmarked for salaries and wages remaining intact, he added.

The new package will also boost the real economy sector, which produces goods and services, Mr Somkid said. Funds will further be allocated to support the healthcare system and create jobs, as well as upgrade infrastructure nationwide.

He also said the package will benefit the financial services sector, which in turn will support the overall economy.

"With this new stimulus measure, the business sector will be confident that they have something to fall back on. If nothing is done, we will see the repeat of the 1997 financial crisis. But this time, we have learned the lesson, so we know how to solve the problems," Mr Somkid said.

Bank of Thailand governor, Veerathai Santiprabhob, at the same briefing said the amount banks pay to a financial bailout fund will be cut to 0.23% of deposits annually from 0.46%, adding that this will improve the "transmission process" for monetary policy.

The economy this year is set for its worst contraction since the 1990s, as tourism, exports and consumer confidence stall, putting pressure on the government to step up spending.

The change in the amount commercial banks pay into the Financial Institutions Development Fund will last for two years once approved. The central bank in December indicated the contribution rate could be seen as an effective lower bound for the benchmark interest rate.

The Bank of Thailand has cut interest rates to a record low of 0.75% this year and injected liquidity to stabilise financial markets.

Mr Veerathai also said that the central bank is seeking to issue an executive decree that would enable it to purchase good quality, maturing corporate bonds that are being rolled over.

The bank would be able to purchase at most half, but not all, of the debt being rolled over. The goal is to backstop the corporate bond market, Mr Veerathai said.

"The reason for the central bank to issue an executive decree authorising it to buy corporate bonds is because a strong and healthy financial system will serve as a main pillar of the economy," he added.

Under another initiative, the monetary authority will seek legal changes so it can directly offer soft loans, also known as concessionary loans, similar to a policy rolled out to help the economy after severe flooding hit Thailand in 2011, he said.

Finance Minister Uttama Savanayana said yesterday that every ministry supported the proposal for them to contribute 10% of their budget allocations to support the new stimulus package.

The government has already rolled out economic packages designed to deliver a boost of more than 500 billion baht to mitigate the impact of the outbreak on businesses and individuals.

Vietnam to half quarantine time for fully vaccinated visitors

HANOI: Vietnam will slash the duration of mandatory quarantine for foreign visitors from two weeks to just seven days, the Health Ministry said on Wednesday, as the Southeast Asian country battles its biggest Covid-19 outbreak yet.

Visitors to Phuket in July were at just 1% of pre-pandemic levels, an official told Reuters, as a bid to revive international tourism gets off to a slow start amid the country’s biggest Covid-19 outbreak yet.

KANCHANABURI: A Siam Global House branch and a famous frozen food factory have been ordered to close for two weeks from Wednesday amid fears the two places might spawn new coronavirus clusters.

Delta variant dominant, no Lambda yet