TRAT: Farmers in this eastern fruit-bowl province could only watch as three wild elephants gorged themselves on fruit in their orchards on Saturday night.

Siriphat Sangkhawan said on Sunday she and her husband did not dare leave home to expel the pillaging pachyderms as the night curfew was being enforced.

The three jumbos entered her orchards in Khao Saming district after 10pm, and tucked into ripening durian she was hoping to sell on April 20. They brought down three durian trees and devoured at least 30 durians.

Saichol Nuangnim also faced the same fate as the elephants damaged one rambutan tree and 300 kilogrammes of the fruit worth more than 5,000 baht on the same night.

She said the unwelcome visitors arrived at 9pm and treated her orchard like an all-you-can-eat buffet while the approaching curfew restrained her from stopping them. 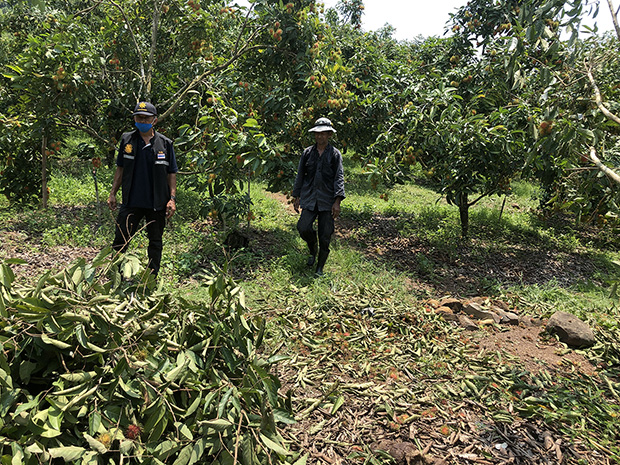 A rambutan tree was damaged by the wild elephant at another fruit orchard in the same tambon. (Photo by Jakkrit Waewkraihong)

Wild elephants often emerge from the jungles at this time of year, when fruit such as durians and rambutans are at their tastiest.

Bamphen Prueksanit, the kamnan of tambon Sator where the two orchards are located, said he expected wild elephants to come back for more on Sunday night. Defence volunteers will conduct patrols to guard all fruit orchards against the freeloaders, he added.