Revellers and water fights are absent from Silom Road, one of Bangkok's top destinations for the Songkran festival, due to the COvid-19 outbreak. (Photo: Wichan Charoenkiatpakul)

Prime Minister Prayut Chan-o-cha will on Tuesday push ahead with a proposal to set up the Asean Response Fund (ARF) as part of a six-point declaration to be endorsed by the 10 Asean leaders as they join hands to fight Covid-19.

Their cooperation, initiated in response the the pandemic that has left the situation in each member state volatile, will witness a rare Asean summit teleconference chaired by Vietnamese Prime Minister and Asean chair Nguyen Xuan Phuc.

Gen Prayut has been preparing for the talks since last week. He said he plans to table a number of important items during the one-day meeting, which will culminate in the Declaration of the Special Asean Summit on Coronavirus Disease (Covid-19).

"The prime minister will ask all Asean leaders to seriously carry out the plans under the declaration," a government official said on Monday.

One of six measures in the declaration is the establishment of ARF to arm medical personnel with weapons in their ongoing battle against the coronavirus, as well as pave the way for a new "force" to eradicate the disease in the long term.

Thailand had earlier proposed setting up a fund to finance those initiatives at a recent meeting joined by foreign ministers. The idea was given the greenlight, pending final approval from the 10-nation bloc on Tuesday.

The fund is intended to finance the purchase of medicine and medical equipment, as well as research for a Covid-19 vaccine, the official said.

Responding to Thailand's proposal to ask Asean to set up the ARF to fight the outbreak of Covid-19, government spokeswoman Narumon Pinyosinwat told the Bangkok Post that agenda will be pushed at the visual Asean meeting on Tuesday by the Thai prime minister. Further details, however, were not forthcoming.

According to The Jakarta Post, part of the existing Asean Development Fund will be allocated to set up the new fund.

Financing issues will be further discussed between Asean and its three close allies -- China, Japan and South Korea -- this afternoon. That meeting is set to culminate in a Joint Statement of the Special Asean Plus Summit on Coronavirus cooperation pact.

The statement will focus on plans to seek financial aid from those Asean "plus three" countries and other international organisations, in addition to measures against Covid-19, which are similar to the Asean declaration, officials said.

Five other initiatives in the declaration are putting people at the centre of the fight to protect themselves against the virus, reinforcing public health measures, quickly responding to emergency cases, acting against distorted and false information and relieving the damage done to regional economies.

"The Thai prime minister will also emphasise the need to reduce the impact of fake news," the official said. 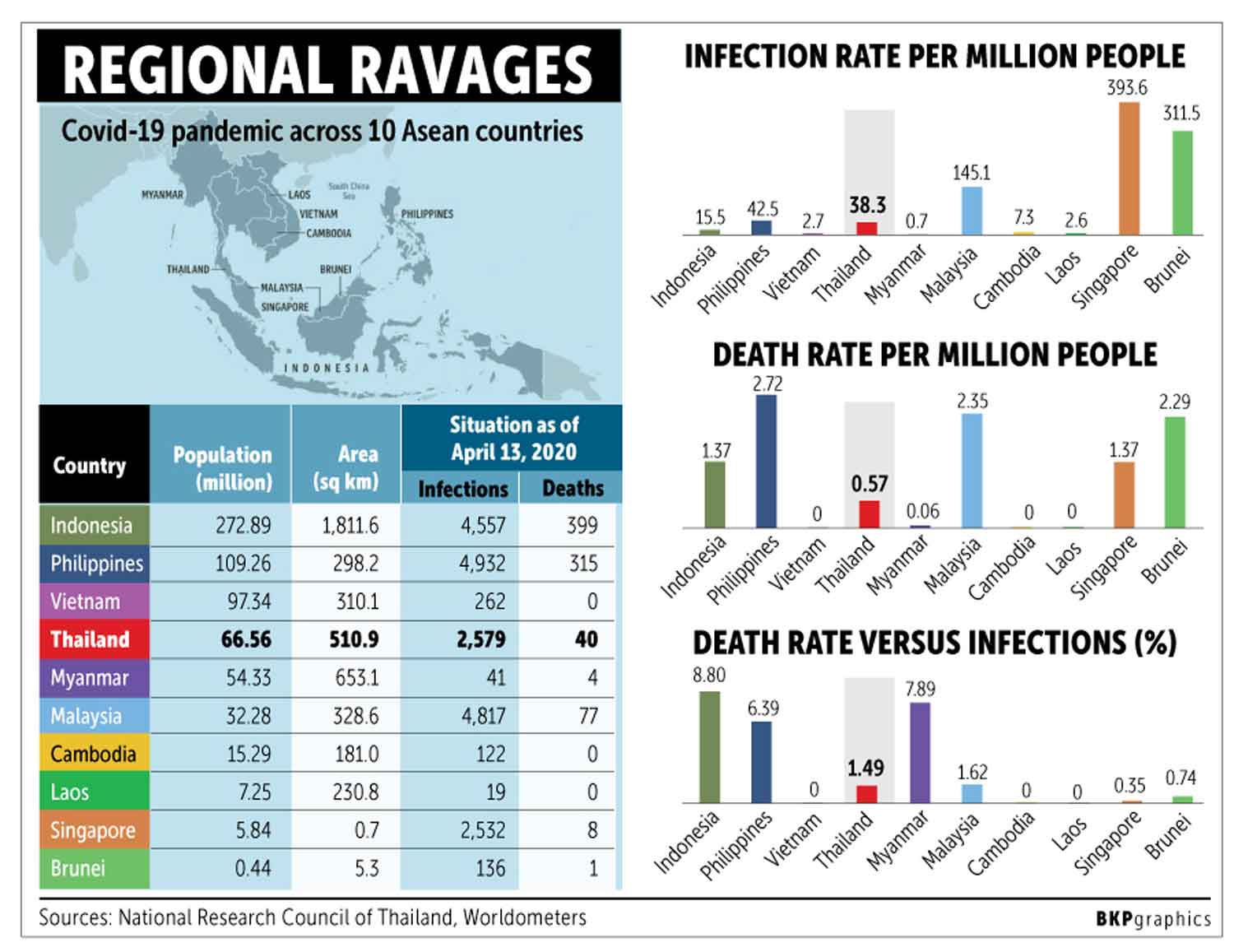 The new 10-country effort is expected to restore Asean's image, The Jakarta Post reported, adding the bloc has been criticised for its slow response and the tendency of its members to put their national interests first.

China, which appears to have been successful in containing Covid-19, had suggested that Asean hold a special summit to encourage its members to jointly fight the coronavirus.

It is not the first time Asean has come together to tackle a regional health issue. When the region was hit by Severe Acute Respiratory Syndrome (Sars) in 2003, its leaders discussed the outbreak in Bangkok before launching joint measures to fight the disease, The Jakarta Post reported.

The ongoing Covid-19 situation in the region became a grave concern after some participants in a religious ceremony, which was attended by 16,000 Muslims in the Malaysian capital of Kuala Lumpur, were infected with the disease, leading to an increase of infections in Indonesia and Brunei, the paper reported, citing Hoang Thi Ha, lead Asean researcher for political and security affairs at the Singapore-based Iseas-Yusof Ishak Institute.

Thai returnees from Kuala Lumpur also urged the government to reinforce its 14-day quarantine measure. Although the number of new Covid-19 cases appears to have slowed over the past week, health officials have insisted that citizens remain vigilant in their efforts to halt the disease's spread.

Centre for Covid-19 Situation Administration spokesman Taweesilp Visanuyothin instructed people "not to lower your guard", with only 28 new cases being reported on Monday -- a drop from 33 on Sunday and 45 on Saturday. Those new infections bring the national tally to 2,579, with the death toll hitting 40 after two more people died.