Phra Apiram Ruengthip, 46, a monk at Wat Mongkhol Nimit in Bang Sao Thong district of Samut Prakan, shows police the gun he hid in a bag plastic bag containing empty bottles following his arrest on charges of attempted murder of a layman living at the same temple. (Photo by Sutthiwit Chayutworakan)

SAMUT PRAKAN: A Buddhist monk arrested for shooting a layman living at the same temple in Bang Sao Thong district has claimed he acted in self-defence.

Seized from the monk was an unregistered pistol with two bullets which he showed to police when questioned. It had been hidden in a black plastic bag containing empty plastic bottles.

Police then took the monk to meet the abbot so he could be defrocked before he was taken to the Bang Sao Thong police station. According to Thai law, a Buddhist monk can be questioned but may not be detained in jail unless he is defrocked first.

The arrest followed a gun attack on a man, identified later as Samret Kasemrat, 42, who lived in the temple, on Thursday night. Mr Samret was hit in the right testicle and was rushed to Bang Bo Hospital.

The defrocked monk told police he had been in the monkhood for 4-5 years. In recent months, belongings at the temple had often been stolen. He then bought a pistol and patrolled around the temple at night.

On Thursday night, while he was patrolling behind the temple, he saw Mr Samret walking around the area. The man allegedly scolded him with rude words and walked toward him. He also claimed the man was carrying something in one of his hands.

The former monk said he asked Mr Samret to stop, but he ignored him. This prompted him to fire a warning shot into the water.

However, Mr Samret continued to approach him, forcing him to fire shots at the man in self-defence, he said, claiming he did not know where they hit.

After the shooting, he returned to his living quarters, said Apiram.

Police initially pressed charges of attempted murder, illegal possession of a firearm and carrying it in public against the suspect. He was held in police custody for legal action.

Authorities concede that crimes involving guns have become a growing problem in Thailand.

The number of unregistered guns in the country has been estimated at around 4 million, compared with 6 million registered legally, according to the Geneva-based Small Arms Survey. 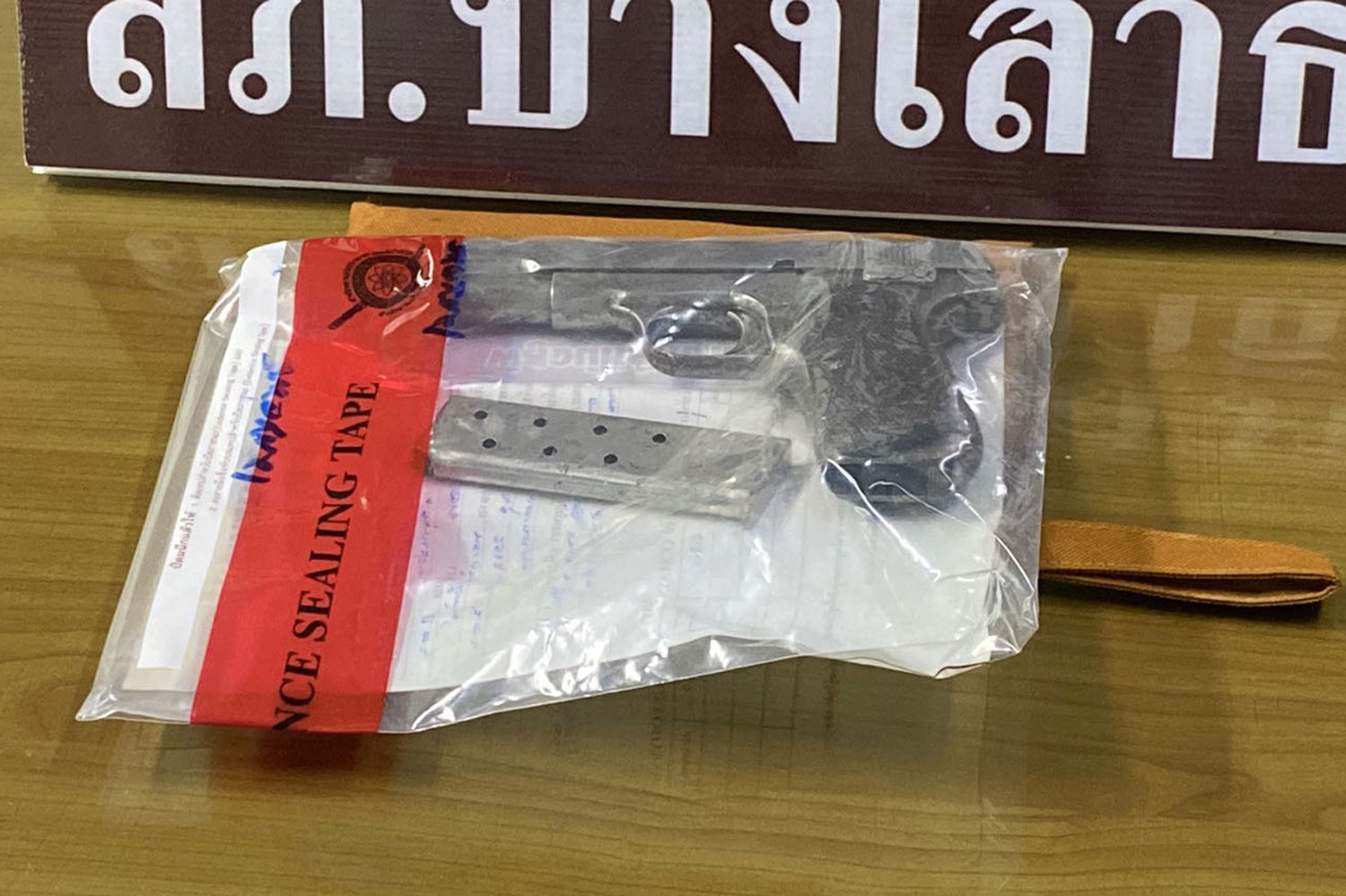 The pistol used by a former monk to shoot a man is shown by police. (Photo by Sutthiwit Chayutworakan)